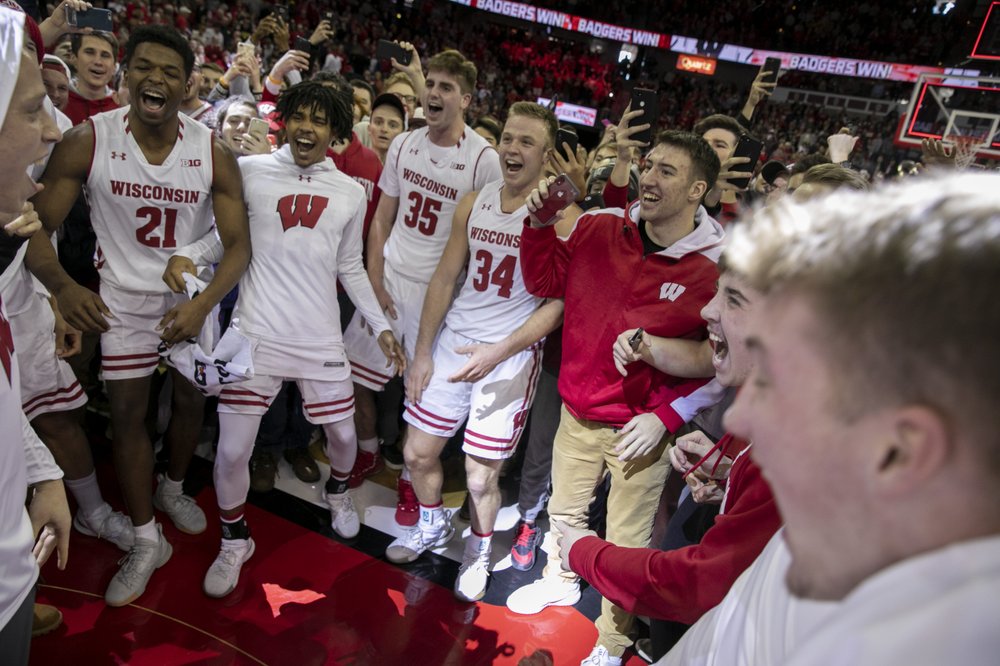 MADISON, Wis. (AP) — Ethan Happ and the Wisconsin Badgers finally closed out a tight game. Against No. 2 Michigan, too.

Happ had 26 points and 10 rebounds as Wisconsin handed the Wolverines their first loss of the season, breaking away in the final minute for a 64-54 victory Saturday.

Fans rushed the floor after the Badgers (12-6, 4-3 Big Ten) finished off the upset. The victory came after Wisconsin dropped back-to-back games that came down to the stretch.

Kobe King played the most minutes (31) off the bench. The La Crosse native nailed both his 3-pointers, going 2-for-4 from the field. He added five rebounds, a steal, a block, an assist and a turnover.

Wisconsin briefly took the lead Monday night over Maryland after trailing by as many as 21 points in the second half on the road, only to see the game slip away in the final seconds. Likewise, the Badgers took Purdue to overtime Jan. 11 at home before struggling down the stretch with turnovers.

The Wolverines closed within 57-54 on Isaiah Livers’ 3-pointer with just under a minute to play. Michigan put on a full-court press that the Badgers broke, and Ignas Brazdeikis was whistled for a flagrant foul on Happ, who was across the court from the ball.

Happ, shooting 49 percent from the line coming in, hit the first shot as an incensed Michigan coach John Beilein argued with the officials, but missed the second. On the ensuing Wisconsin possession, Happ put back his own miss for a 60-54 lead, then hit a streaking Nate Reuvers following a Michigan turnover for a dunk that sealed it.

Beilein said he wasn’t given an explanation on the flagrant foul seemed mystified by the call. Beilein said he told the referees Michigan was going to foul.

“I’ve got to be schooled up on that,” Beilein said. “Apparently it’s something new to me that I have to be educated on.”

Gard, however, said it was a point of emphasis following last season for fouls where there’s no play on the ball.

For Happ, the final sequence was a bit of redemption.

In a 59-52 loss to Minnesota on Jan. 3, the Gophers intentionally fouled Happ down the stretch, and he finished 1 of 7 from the line. Against the Boilermakers, he committed a key turnover toward the end.

Along with Happ’s scoring and rebounding, he did the little things well, teammate Brad Davison said. That included diving on the floor midway through the second half to secure a loose ball and call a timeout.

“It’s our All-American,” Davison said. “I don’t know how many All-Americans dive on the floor for loose balls. But ours does.”

Both teams came in averaging less than 10 turnovers a game, and Wisconsin finished near its average with 11. But Michigan turned it over 16 times for the game and managed just six points over the final 3:30.

The foul on Happ wasn’t the only thing that didn’t go Brazdeikis’ way. The freshman came in averaging 15.6 points a game, but was held scoreless in 23 minutes, missing all five of his shots. He also was limited by foul trouble, including two in the first half. On one, he tried a behind-the-back pass in the lane while driving toward the hoop, but was called for a charge. “He got himself into foul trouble, and it’s very typical what happens to freshmen,” Beilein said.

Michigan: The Wolverines would’ve had a good case to make as the No. 1 team in the country with a win following Duke’s loss in overtime Monday. Instead, Michigan lost for just the first time since last season’s national championship game.

Wisconsin: Once ranked as high as No. 12, the Badgers had lost four of five coming in. Knocking off the No. 2 team in the country helps Wisconsin right the ship for now.

Wisconsin: Travels to Illinois on Wednesday.