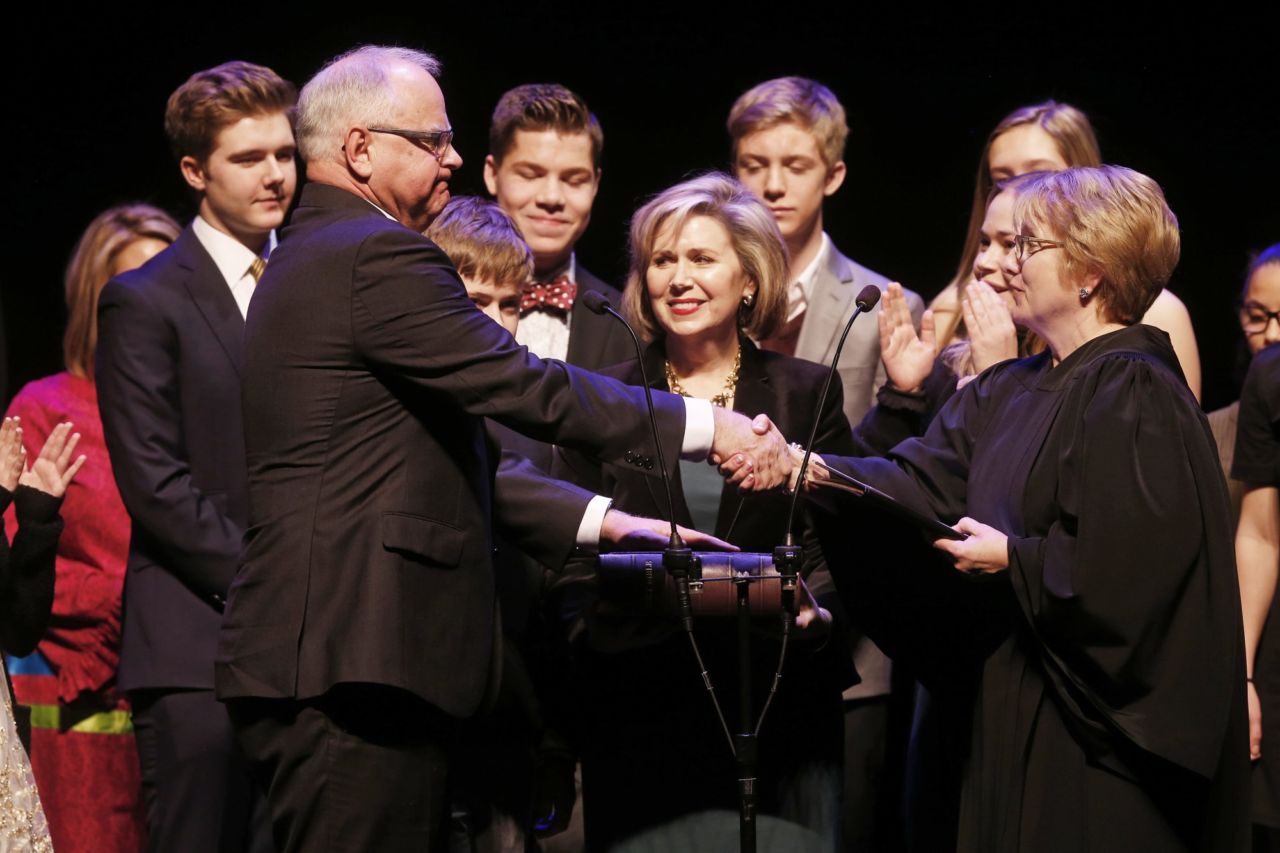 ST. PAUL, Minn. (AP) — Dozens of teachers lined the aisles as one of their own, Tim Walz, strode to the stage of the Fitzgerald Theater on Monday and said he would work as governor to stress the need for better education and health care for all.

Walz told a crowd of dignitaries and supporters that he will continue his campaign theme of “One Minnesota” to bring Minnesotans together. He said the state can’t be content with its past progress.

“We find ourselves at a time when economic, social, racial, and geographic division feels rampant. I will not normalize behavior that seeks to deepen or exploit these divides,” the Democrat said. “I will not normalize policies that are not normal — ones that undermine our decency and respect. If Washington won’t lead, Minnesota will.”

The ceremonies also gave special recognition to Native Americans, including new Lt. Gov. Peggy Flanagan, a member of the White Earth Band of Ojibwe, who’s the highest ranking American Indian ever elected to executive office in any state. She was sworn in by Minnesota Supreme Court Associate Justice Anne McKeig, who also made history as the first Native American to serve on any state supreme court.

Attorney General Keith Ellison, the first black person elected to statewide office in Minnesota, who was the first Muslim elected to Congress, took his oath on a Quran. He was sworn in by U.S. District Judge Michael Davis, the state’s first black federal judge. Secretary of State Steve Simon was sworn in for a second term. And former Anoka-Hennepin middle school math teacher Julie Blaha took the oath as state auditor. Like Walz, those sworn in Monday were all Democrats.

“Disparities in our educational system based on geography, race, or economic status hold back not only our students, but our entire state from reaching its full potential,” Walz said. “That’s why we must dedicate ourselves now, that we must make Minnesota the ‘Education State’ for all children — black, white, brown, and indigenous.”

Walz also stressed that health care will be another top priority.

“As Minnesotans, we can figure out how to deliver health care more effectively, more affordably and with better results,” he said. “We can and must ensure that every Minnesotan has access to high-quality and affordable health care. But it won’t stop there, by just getting our folks health care. We will invest in our cutting-edge research institutions and partner with our state’s health-care industry to ensure that the cures for the world’s most devastating diseases come right through Minnesota.”

Flanagan was sworn in on an 1854 Bible written in Ojibwe. She said it illustrated how her history was full of contradictions.

“I chose this Bible because it has deep spiritual meaning to me as a Catholic — but this Bible also was a tool used to erase Native people’s culture and tradition,” she said.

As her 5-year-old daughter, Siobhan, sat on Walz’s lap on stage, Flanagan recounted how she grew up poor to become a leader of Minnesota’s executive branch, which once “oversaw horrific treatment of my ancestors.” She noted that former Gov. Alexander Ramsey declared during the U.S.-Dakota War in 1862 that the Dakota Indians “must be exterminated or driven forever beyond the borders of Minnesota.” But she also expressed gratitude to now-former Gov. Mark Dayton who in 2012 officially “repudiated those hateful words and actions of a previous administration.”

Ellison recounted the story of 26-year-old Alec Smith, of Minneapolis, who died in 2017 because he couldn’t afford the $1,300 a month he needed for insulin after he became too old for his mother’s health insurance, and tried to ration his supply. Ellison has vowed to continue a lawsuit filed by his predecessor, Lori Swanson, against three big insulin manufacturers.

“My job as the ‘people’s lawyer’ is to help Minnesotans like Alex afford their lives, with dignity and respect,” he said.