Happ hot, rest of Badgers not in OT loss to Marquette 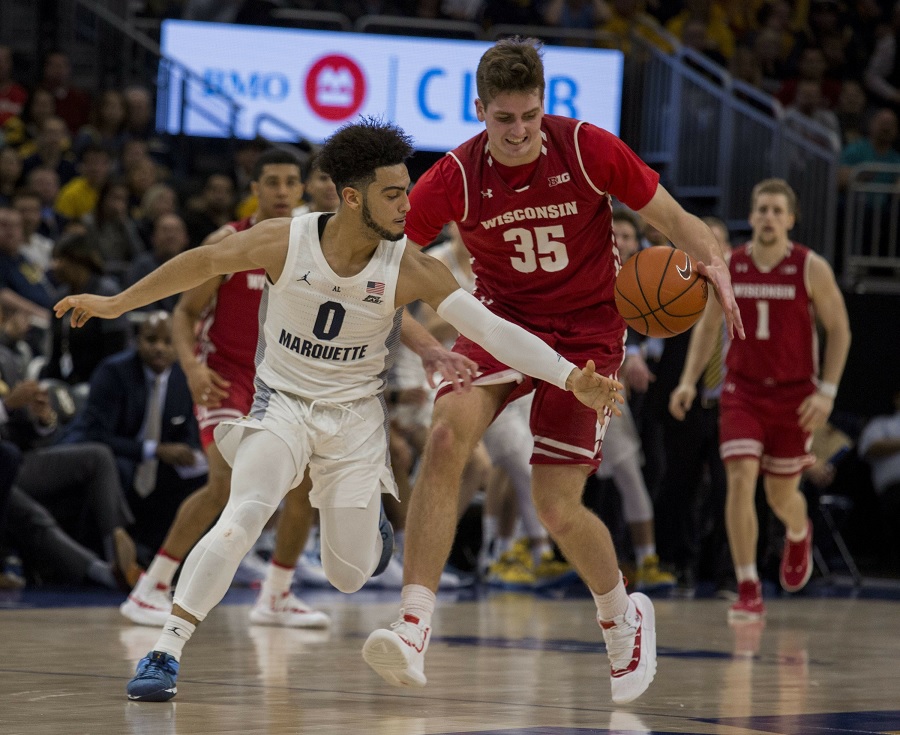 MILWAUKEE (AP) — Marquette is winning games this season in ways that don’t have to do with hitting 3s.

They still have perimeter threats like Markus Howard and Sam Hauser. But a renewed focus on defense has given the Golden Eagles a lift this year.

Howard scored 27 points, Hauser added 13 points and 14 rebounds, and Marquette held No. 12 Wisconsin to 21 percent shooting from 3-point range in a 74-69 win in overtime on Saturday.

This is quite the change from a year ago, when the Golden Eagles relied on outgunning opponents from beyond the 3-point arc to win games. This year, Marquette (8-2) has been at its best when playing solid defense, especially at home.

“We knew if we took away the 3s that we were going to have a good chance to win the game,” Sam Hauser said.

Tighter defense and a decided edge at the foul line boosted Marquette at the end.

The Golden Eagles were 22 of 34 from the charity stripe, with Howard going 12 of 15. Howard and Sacar Anim each missed twice at the line in the final 30 seconds to give Wisconsin (8-2) extra chances.

But Happ was called for an over-the-back foul at the other end with 9.2 seconds left. Ed Morrow’s two free throws gave Marquette a six-point lead to finally ice the game.

It made for a thrilling finish in the rivalry’s first game at Fiserv Forum, Marquette’s new downtown home.

“Effort was there, but I think we’ve got to continue to improve at some of the intangibles and some of the things that are controllable,” Wisconsin coach Greg Gard said.

Marquette beat a team ranked 12th in the AP Top 25 for the second straight week, having defeated Kansas State the previous week.

Wisconsin: The Badgers couldn’t balance Happ’s inside presence with outside shooting, which had been a strength this season. They were 1 of 12 from behind the arc after halftime. D’Mitrik Trice, who finished with 10 points, was just 1 of 6 from 3-point range.

“Trice is a huge key,” Wojciechowski said. “Happ has been consistently terrific. When they’re down, the guy who usually saves them on the perimeter is Trice.”

Marquette: The Badgers broke through Marquette’s defensive wall early in the game, but had trouble getting off good shots late. The presence of 6-foot-9 Theo John late, after he was mired by foul trouble, helped in the lane against Happ, a preseason All-American. Morrow, a post player who transferred from Nebraska, also converted an offensive rebound with 2:07 left for a 69-65 lead.

Wisconsin, which was shooting 70 percent from the foul line this season, was off-target all afternoon, including just 9 of 21 on free throws after halftime. Brad Davison, a 90-percent free-throw shooter, was 0 for 3.

“We did too many things … that shot ourselves in the foot,” Happ said. “We’re not happy about that.”

The younger Hauser, a highly-touted recruit, scored four in the opening two minutes of overtime, including both free throws after Davison was called for a flagrant foul with 3:35 left. He also went 3 of 5 from 3-point range and played 33 minutes.

“Honestly, I look at this as a learning opportunity, a chance to get better” — Trice.