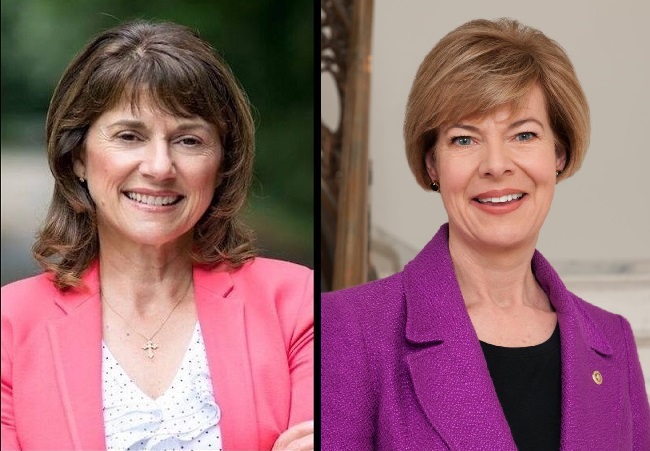 MILWAUKEE (AP) — Republican Leah Vukmir, down in the polls a month before the Nov. 6 election, clashed with Democratic Sen. Tammy Baldwin on Monday, in a debate that turned combative at times as they presented starkly different positions on health care, abortion, immigration and a host of other issues.

Here are the takeaways:

Vukmir defended her push to repeal and replace the Affordable Care Act, saying she would “fall in front of a truck before I would let people go without coverage for pre-existing conditions.” Baldwin said that repealing the national law, known as “Obamacare,” would “go back to the bad old days” and jeopardize protections for people with pre-existing conditions.

Baldwin is a co-signer of U.S. Sen. Bernie Sanders’ “Medicare for all” single-payer health care proposal and has supported universal health care.

“I do want to get to a place where all Americans have access to affordable, quality coverage,” Baldwin said. “We have to figure it out one way or another.”

Vukmir said the “Medicare for all” bill, which she dubbed “Baldwincare,” would “completely turn our health care over to the government.”

Baldwin said she supports a woman’s right to choose whether to have an abortion, eliciting a passionate response from Vukmir, a nurse, who recounted holding a premature baby in her hands and seeing “that tiny heart beating so rapidly under that thin chest wall.”

“Tammy Baldwin would rip that life out of the mother just like that and snuff that life out,” Vukmir said. “It’s wrong, it’s wrong.”

Vukmir called it a “lie that’s being perpetuated by Sen. Baldwin” that she was siding with insurance companies by voting against a bill in the state Legislature to require coverage of oral chemotherapy. Vukmir said she opposed it because of “unintended consequences” that would result in restricting people from receiving oral chemotherapy, not because she was helping insurance companies that opposed the mandate.

“Sen. Baldwin wants to grab a headline,” Vukmir said. “She wants a press release and she just wants to protect her job. … It is a scare tactic to save her job.”

Vukmir, waving papers and referencing an ethics complaint that was filed against Baldwin, said that she “turned her back on the veterans” at the Tomah Veterans Affairs Medical Center that led to the death of Marine veteran Jason Simcakoski in 2014. Vukmir said Baldwin was too slow to respond to a report delivered to her office in August 2014 detailing problems at the facility.

Baldwin said Vukmir “should be ashamed of herself for using a Marine veteran’s death for her own political gain.”

Baldwin noted that she worked with Simcakoski’s widow and parents to pass a law in 2015 that toughened guidelines for prescribing drugs at VA facilities, including requiring VA employees prescribing opioids to be better trained and to follow Centers for Disease Control and Prevention protocol.

Simcakoski’s widow and parents cut two campaign ads for Baldwin in the election, while Tomah whistleblower Ryan Honl supports Vukmir and said it would be “immoral” to vote for Baldwin. An ethics complaint filed against Baldwin by a staff member she fired because of how the Tomah issue was handled was dismissed.

Vukmir, the daughter of Greek immigrants, said President Donald Trump’s wall along the Mexico border “must” be built before other immigration reforms are pursued.

Baldwin said she supports a comprehensive approach to immigration.

Baldwin said she was concerned that the debate over confirming Brett Kavanaugh for the U.S. Supreme Court may “silence an entire generation” of women who are victims of sexual assault. Baldwin said she found Christine Blasey Ford, the woman who accused Kavanaugh of a sexual assault when they were both in high school, to be “credible and compelling.” Vukmir, a Kavanaugh supporter, said “there was nothing to corroborate” Ford’s allegations. She said Baldwin “didn’t even have the decency” to meet with Kavanaugh before saying publicly she would not vote to confirm him.

Baldwin and Vukmir will meet Saturday night in Wausau for the second of their three debates. That one is sponsored by the Wisconsin Broadcasters Association and will air live on television and radio stations across the state starting at 7 p.m. The third debate, sponsored by WISN-TV and the Marquette University Law School, will be Oct. 19 in Milwaukee.