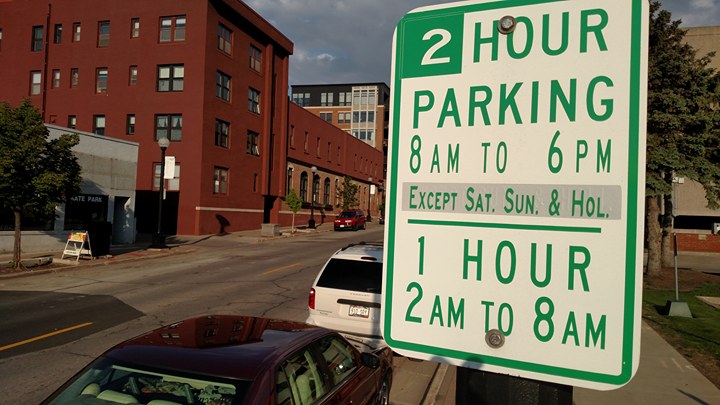 Most complaints have been about expense — students really would prefer free street parking to continue near campus. Others, however, like Jake Seifert, a senior at the University of Wisconsin-La Crosse and local affairs director for the student association, says it simply feels like the city is targeting students with the planned parking changes.

“I think that the way it was presented, and the optics of it, especially are kind of that they’re trying — I don’t want to say go after — but it affects disproportionately the students and the workers on those campuses, a lot more than it would the community as a whole,” Seifert said. “I feel like there’s a lot of discussion, where it’s kind of — I don’t know if it’s always intentional but it does kind of come off as — residents versus students verus commuters.”

Monday, the city’s Board of Public Works approved a plan to launch a one-year pilot program around UW-L and Western Technical College to test paid street parking. No meters. Those parking would pay by phone through an app or call an 800 number. Cost would be $1 per hour with a four-hour max.

Mayor Tim Kabat said the program, “is not targeted at students.” Kabat also emphatically stressed, “there is no such thing as free parking” and it “wasn’t a question of if there will be paid street parking, but when.”

Most student complaints have centered around the added expense of having to pay for parking. There have also been questions on whether residents in the neighborhoods are that concerned about student parking.

La Crosse Assistant Police chief Rob Abraham, developing the paid parking system for the city, said it was “hypocritical” for college representatives to want the city to offer free parking when students are charged to park on campus.

In response to whether residents care about students parking on the streets, Abraham also said, while the city is in the middle of a dangerous drug epidemic, “Parking is always the number one topic in this city,” and the issue “gobbles up a lot of my time.”

Seifert feels like it makes students look as if they’re all outsiders.

“Most of the time the students that are going to school at UW-L are residents of La Crosse,” he said. “They just live in different neighborhoods. They’re driving to school for whatever reason.

“I think when you kind of put it as an ‘us versus them,’ it’s just going to get more people riled up.”

After the one-year trial, paid parking will likely expand to other parts of the city. The area around Gundersen Health System is a possibility.

There is no definite start date yet for the pilot program.