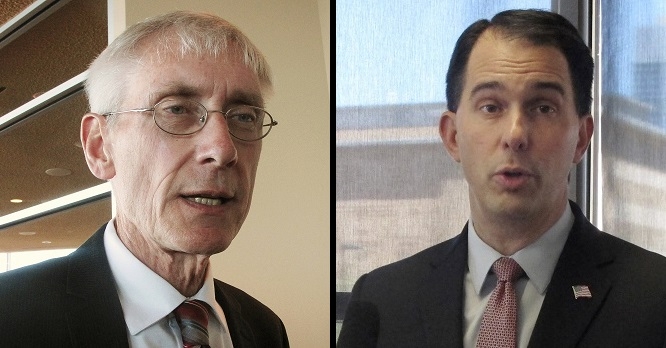 It’ll be hard to contain the enthusiasm among Wisconsin Democrats heading toward fall elections.

A poll released last week indicates a potential trouncing of Republicans in the governor’s race and the U.S. Senate race.

“Basically a purple state in a lot of ways,” he said. “And, I think voters reject, in many ways, the extreme candidates and are looking for people who are going to solve problems.”

The NBC/Marist College poll had Gov. Scott Walker getting beat this fall by 13 points in a hypothetical matchup with Democrat Tony Evers with 54 percent of support compared to Walker’s 41 percent.

The poll was conducted July 15-19,. It surveyed 1,040 adults, 906 of whom were registered voters. The margin of error for the entire set of respondents was 3.6 points.

The same poll also had Democratic Sen. Tammy Baldwin ahead of both Republicans in the race by at least 15 percentage points.

Smuksta fully believes that the so-called blue wave is coming in fall elections.

“We see some enthusiasm among the Democrats in term of special elections and, I think, in part, they’re sending a message that they don’t like the direction of the state,” he said. “”People don’t like to have one party in control.”

Smuksta added that the poll could show a disaffection with Walker and simply a need to shake things up a bit.

Like Washington, Republicans are in control of all branches of government in Madison.