Man shot by police for charging them with logging chain, says he wished he had his logging chain during arrest Tuesday 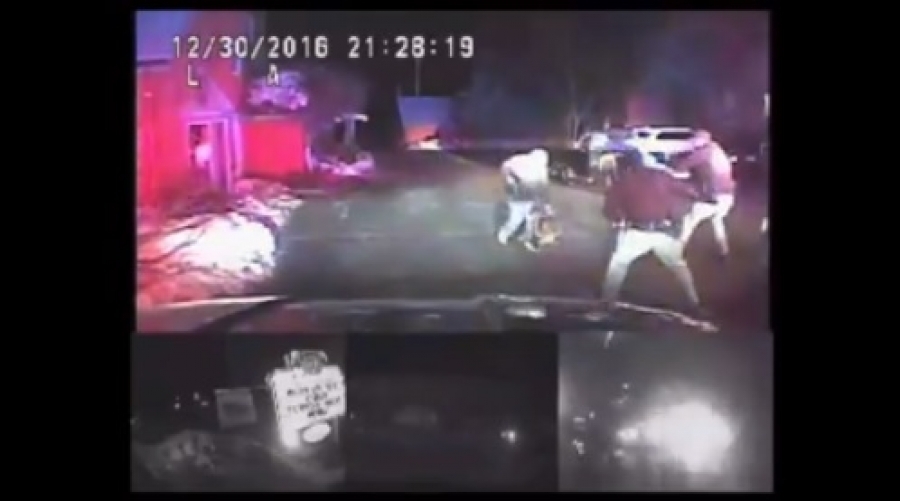 When you get shot twice by police for charging them with a logging chain, the best thing to do the next time you have contact with officers is not to mention wanting your logging chain.

That’s partially why Daniel Lexvold is back in jail in La Crosse.

Back in December of 2016, Lexvold was shot twice by La Crosse police for charging them with a logging chain.

During that stop, officers used everything to try and get Lexvold to stop coming at the — verbal commands, tasers, bean bag rounds from a shotgun and, finally the police K9 named Sayibe.

None of it worked, before police resorted to shooting Lexvold, who came charging them while swinging a chain. Below is that video:

After a delay due to the ongoing investigation and coordination with the multiple agencies involved, the La Crosse Sheriff’s Office and La Crosse Police Department are releasing squad video of the officer involved shooting that occurred on Hwy 16 on December 30th. Below is an explanation and summary of the La Crosse Officer’s squad car video. The La Crosse Sheriff’s Office will be release video from their squads through their official channels today. The video can be difficult to follow once the suspect charges the officers, so here is an explanation of the video layout. The large video block is the camera facing out the front of Officer Deflorian’s squad car. The lower right block is from the camera facing out the passenger side, the middle bottom block is the camera facing out the rear of the squad and the bottom left box is the camera facing out the driver’s side of the squad car. Also, if you open the video to a full screen format on a PC it is going to pixilate your view some since this is a copy from a smaller electronic format. As the suspect charges the officers, you will have to look at the lower video boxes to follow the suspect. As you can see from the video, it shows the deployment of all the different force options that were listed in the previous press releases. The less lethal bean bag rounds are being delivered by Officer Deflorian through the shotgun. As the suspect charges, you will see Deputy Stoughtenger release his K9, which does get hit by the chain. You will also see another deputy come running in from the right to deploy a taser. After the suspect jumps on the hood of the squad with the chain, he will proceed around the back of the squad charging Officer Deflorian with Deputy Stoughtenger in pursuit. This is where you will have to look at the lower video boxes. In the lower boxes you will see the suspect proceed past the passenger side camera, past the rear viewing camera with the deputies in pursuit and then into view of the driver’s camera. As the suspect is charging around the rear of the squad, you see Officer Deflorian actually slips and falls (look at the lower left video box). Just as Officer Deflorian is getting up, the suspect charges around the driver’s rear bumper at which time you can hear gun fire as well as another attempted taser deployment. Note: You will hear the suspect use expletives during the course of the video.

Lexvold had yet to be tried in La Crosse County’s courts for the confrontation that happened just off of Highway 16.

In fact, the 38-year-old former La Crosse man has nine open cases in the county.

He was scheduled to be in court Tuesday for a theft but that didn’t happen, after what happened between him and police early Tuesday.

Around 1 a.m., Lexvold was pulled for driving the wrong way down Cass Street in downtown La Crosse.

When police asked him to get out to perform a sobriety test, a drug pipe fell out of his car.

As police tried to take Lexvold into custody, he became combative. During the struggle with police, Lexvold said it was a good thing he didn’t have his logging chain with him.

That remark could be considered a threat.

Lexvold is now scheduled for a court appearance Wednesday afternoon — not for stealing a boat lift, which was why he was originally scheduled — but for a slew of new charges that have him back in jail.

One officer suffered a minor injury as part of the struggle to get Lexvold into custody.