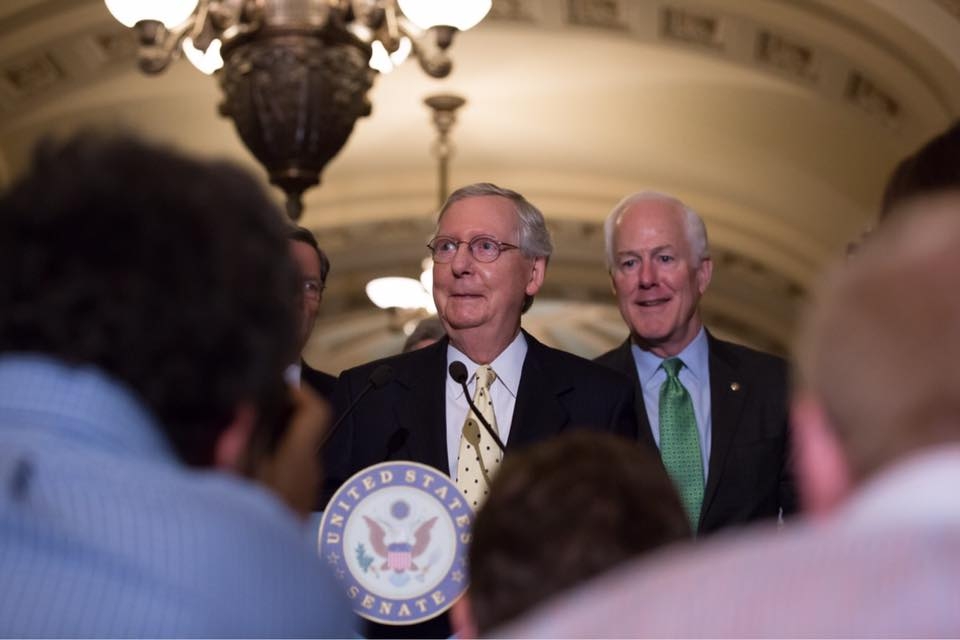 After debate began around midnight, and unable to pass even a so-called “skinny repeal,” it was unclear if Senate Republicans could advance any health bill despite seven years of promises to repeal “Obamacare.”

The Senate GOP released the text for the repeal at 10 p.m. Thursday – just hours before the vote.

“This is clearly a disappointing moment,” Senate Majority Leader Mitch McConnell, R-Ky, said. “I regret that our efforts were not enough, this time.”

McConnell put the health bill on hold and announced that the Senate would move onto other legislation next week.

A key vote to defeat the measure was cast by Sen. John McCain, R-Ariz., who returned to the Senate this week after receiving a diagnosis of brain cancer. In an impassioned speech the day he returned, McCain had called for bipartisanship on major issues of national concern, and a return to the “regular order” of legislating by committee.

Three Republicans joined with all Democrats to reject the amendment, which would have repealed a mandate that most individuals get health insurance and suspended a requirement that large companies provide coverage to their employees. It would have also delayed a tax on medical devices and denied funding to Planned Parenthood for a year.

The final vote was 49-51. Republicans Lisa Murkowski of Alaska and Susan Collins of Maine joined McCain in voting no.

The amendment was a last resort for Senate Republicans to pass something — anything — to trigger negotiations with the House.

“It’s time to turn the page,” said Senate Minority Leader Charles Schumer of New York. “We are not celebrating. We are relieved.”

Health and Human Services Secretary Tom Price said in a statement the Trump administration would pursue its health care goals through regulation. “This effort will continue,” Price said.

Buoyed by a signal from House Speaker Paul Ryan, McConnell had introduced a pared-down health care bill late Thursday that he hoped would keep alive Republican ambitions to repeal “Obamacare.”

McConnell had called his measure the Health Care Freedom Act. It was not intended to become law, but to open a path for a House-Senate conference committee to try to work out comprehensive legislation Congress could pass and send to Trump.

The measure would have repealed the unpopular Affordable Care Act requiring most people to have health insurance or risk a fine from the IRS. A similar requirement on larger employers would be suspended for eight years.

Additionally it would have denied funding to Planned Parenthood for a year, and suspended for three years a tax on medical device manufacturers. States could seek waivers from consumer protections in the Obama-era law, and individuals could increase the amount they contribute to tax-sheltered health savings accounts for medical expenses.

Ryan, R-Wis., seemingly opened a path for McConnell earlier Thursday evening by signaling a willingness to negotiate a more comprehensive bill with the Senate. Some Republican senators had been concerned that the House would simply pass the “skinny bill” and send it to Trump. That would have sent a shock wave through health insurance markets, spiking premiums.

Ryan sent senators a statement saying that if “moving forward” requires talks with the Senate, the House would be “willing” to do so. But shortly afterward, his words received varied responses from three GOP senators who’d insisted on a clear commitment from Ryan.

“Not sufficient,” said McCain, who returned to the Capitol Tuesday. The 80-year-old McCain had been home in Arizona trying to decide on treatment options for brain cancer.

Sen. Lindsey Graham, R-S.C., initially said “not yet” when asked if he was ready to vote for the scaled-back Senate bill. But later, he told reporters that Ryan had assured him and others in a phone conversation that the House would hold talks with the Senate.

“I feel comfortable personally. I know Paul; he’s a man of his word,” said Graham.

The convoluted developments played out as a divided Senate debated legislation to repeal and replace the Obama-era law. With Democrats unanimously opposed, the slender 52-48 GOP majority was divided among itself over what it could agree to.

After a comprehensive bill failed on the Senate floor, and a straight-up repeal failed too, McConnell and his top lieutenants turned toward the “skinny repeal.”

It would have been the ticket to negotiations with the House, which passed its own legislation in May.

But that strategy caused consternation among GOP senators after rumors began to surface that the House might just pass the “skinny bill,” call it a day and move on to other issues like tax reform after frittering away the first six months of Trump’s presidency on unsuccessful efforts over health care.

Ryan responded not long after with a far from definitive statement that blamed the Senate for being unable to pass anything, but said, “if moving forward requires a conference committee, that is something the House is willing to do.”

“The reality, however, is that repealing and replacing Obamacare still ultimately requires the Senate to produce 51 votes for an actual plan,” he said.

And a bipartisan group of governors including John Kasich of Ohio and Brian Sandoval of Nevada also announced against it.

On their own, the changes in the skinny bill could roil insurance markets. Yet the scenario at hand, with senators trying to pass something while hoping it does not clear the House or become law, was highly unusual.