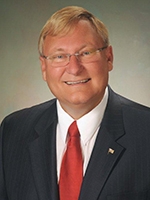 Many in Wisconsin’s largest are pointing to this year’s surge in violence as reason enough to re examine the state’s gun laws. But restrictions on gun ownership won’t help stop any crime, maintains republican state senator Van Wanggard.  He says there are criminals who carry guns illegally every day.  Passing more gun laws won’t change that.

Milwaukee has recorded more than 80 murders so far this year, most with guns. More than double the number by the same time last year.