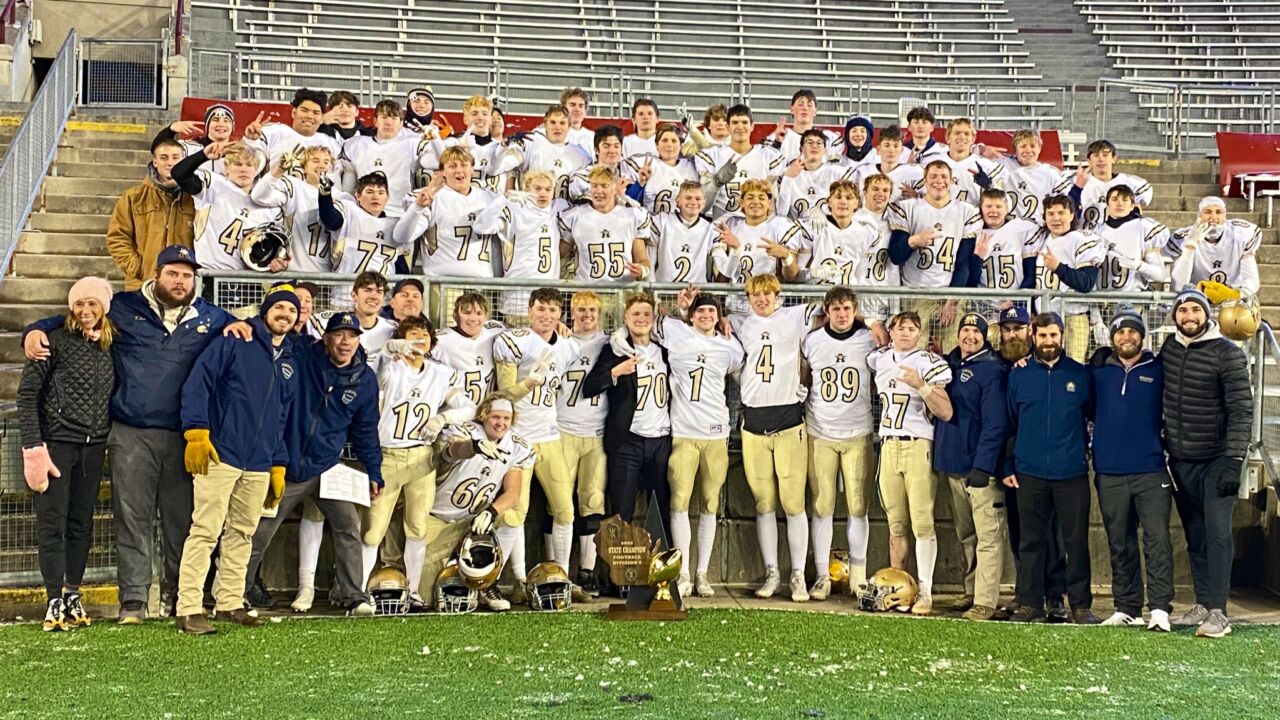 A 27-yard touchdown from Jackson Flottmeyer to Collin Conzemius with just over 2 minutes to go, won the Aquinas High School football team its second-consecutive state championship.

The Blugolds defeated Mayville 22-14 on Thursday a Camp Randall for the Division 5 title.

The win gives Aquinas its 29th win out of their last 30 games. Its only loss came in the regular-season finale to West Salem, which is playing for a D3 title at 10 a.m. Friday. Last year, the Blugolds defeated Mayville in the championship 28-26.

While the Flottmeyer-Conzemius touchdown gave Aquinas (13-1) the late lead, it was a Kole Keppel forced fumble recovered by Henry Suttie that gave Aquinas the ball back, to set up the winning drive.

Before the drama of those two possessions, there was even more before that, as the Blugolds did give the ball away themselves 7 yards from taking the lead, and the initial reaction was that they did take the lead.

After Mayville (13-1) tied the game, Aquinas took over on their own 36 yard line and drove the ball down to the Mayville 7 in 15 plays, eating up 5 minutes, 37 seconds of the clock.

But, on first and goal, Hargrove fumbled the ball and it looked as though Aquinas had recovered for a touchdown. But, after a review, referees determined that one of the Aquinas players had stepped out of bounds with the ball, meaning it’s a touchback and Mayville ball on their own 20.

Three plays later, Aquinas had the ball back again.

Conzemius finished with 4 catches for 115 yards and had both Flottmeyer’s touchdown passes — the other for 71 yards. Flottmeyer was 7-for-11 for 137 yards.

Calvin Hargrove rushed 20 times for 97 yards and a score for Aquinas, which outgained Mayville 347 yards to 272.

Mayville opened the scoring with a 10-yard touchdown run early in the second quarter, but the Blugolds went into halftime with an 8-7 lead, after Hargove’s 3-yard TD run.

Aquinas took a 14-7 lead on the first Flottmeyer-Conzemius connection.

Mayville tied the game with 9:47 remaining, before the Blugolds won the game on a three-play drive.