"I do. Do you?" — La Crosse's Davis twins encouraging young people to vote in new area campaign 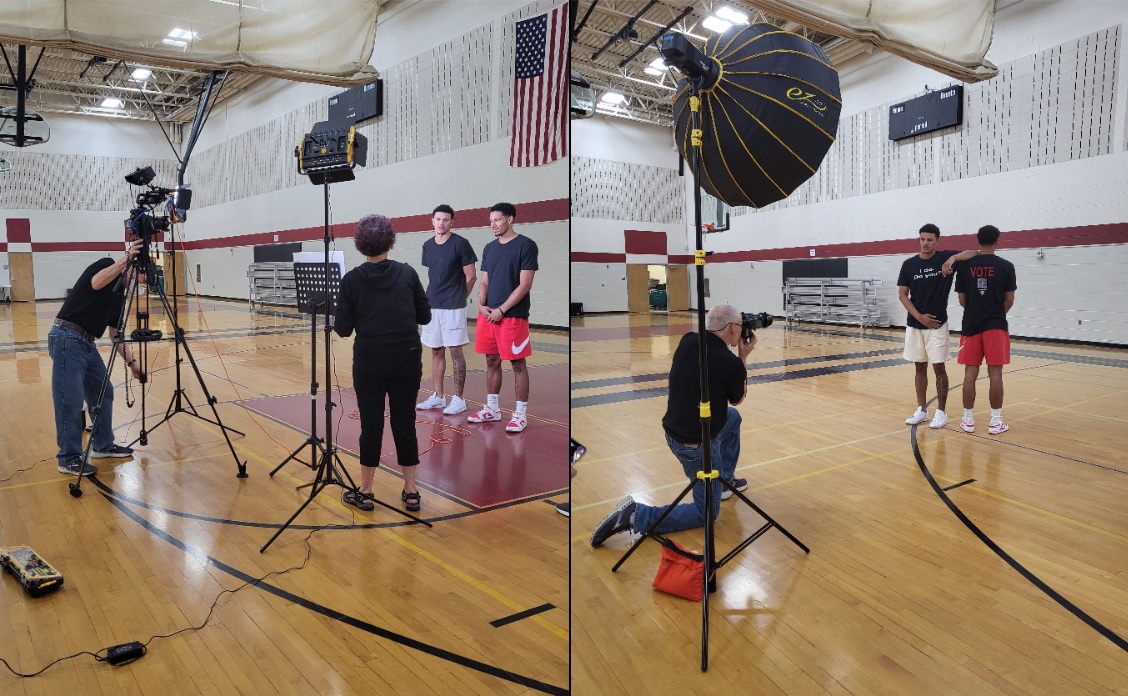 A photo and video shoot with Jordan and Johnny Davis at the Central High School gym in July of 2022, in making a "Get Out the Vote" campaign. (PHOTO: League of Women Voters La Crosse Area)

A campaign gets underway Thursday in the hopes of getting young people in the La Crosse area to vote.

You might see a couple of famous La Crosse athletes on billboards on the south side, as you drive out of town soon.

Two years ago, 10 Central High School students, including brothers Jordan and Johnny Davis, were part of a similar message called “Every Student Votes.”

Now, Jordan is a guard for the University of Wisconsin men’s basketball team, while Johnny is a week away from officially starting his NBA career, after being the No. 10 pick by the Washington Wizards, and the two are back at it with a “Get Out the Vote” campaign.

The La Crosse area’s League of Women Voters managed to snag the two from their busy schedules to hop in the Central High School gym over the summer and put together a voting message deemed, “I Do. Do you?”

The intent is to encourage young people to vote, as Todd Fergot — the Davis twins’ high school coach, who’s been teaching government at Central for nearly three decades — definitely understands.

“It’s hard, as young people, it’s hard to get them to value it,” Fergot said. “And I think Johnny and Jordan have done a great job and been great ambassadors of it, for sure.”

To make the campaign happen, Jordan drove back to La Crosse from Madison, while Johnny made time before heading to DC for NBA training camp.

“They really made an effort to be here and do this with us,” Chris Haskell, chair of the Voter Services Committee for the League of Women Voters of the La Crosse Area, said on La Crosse Talk PM recently.

The idea came from Allyson Fergot, who has worked with the League — not the NBA but the League of Women.

Haskell said Allyson came to her and asked, “We were thinking about that great video that you guys did when Johnny and Jordan were seniors. Wouldn’t it be great if they wanted to do something now that they’re more of a state and national presence?”

Allyson is a senior at UW, a Central High graduate and, if you couldn’t tell by the last name, Todd’s daughter. So, she needed dad to do one thing — make a phone call.

“I’m going to give all the credit to my daughter,” Todd said. “But, actually, I should say my daughter and Chris Haskell. Her and Ally had talked and asked me, and I said, ‘Absolutely.’”

The entire premise of the campaign — with less than a month until the midterm elections — is to encourage everyone, but especially young people to, of course, vote.

“They know the importance of it and they value it and they want others to be a part of it, too,” Fergot said. “And maybe if they can encourage even just a few people who maybe not have normally voted, to become a part of it. Once you vote one time, you get registered to vote, you get something that has a pretty good chance for people to consistently do moving forward.”

Fergot said that’s the biggest hurdle, getting them registered.

“It’s a little scary for kids,” Fergot said. “It’s like anything else, if you don’t understand it, it might be a reason for staying away. We want to try and just simplify it as much as we can for them, educate them on that process. And that was so cool of Johnny and Jordan, who have certainly taken a real key interest in that, for sure.”

The Davis twins will be featured on billboards at the Losey Boulevard-Mormon Coulee intersection — going up Thursday — and another on Highway 33 by Central High, which goes up Monday

Along with the video and billboards, the League has created posters featuring the basketball stars that includes a QR code on the back that takes you to the Wisconsin voting website, hoping kids will check it out.