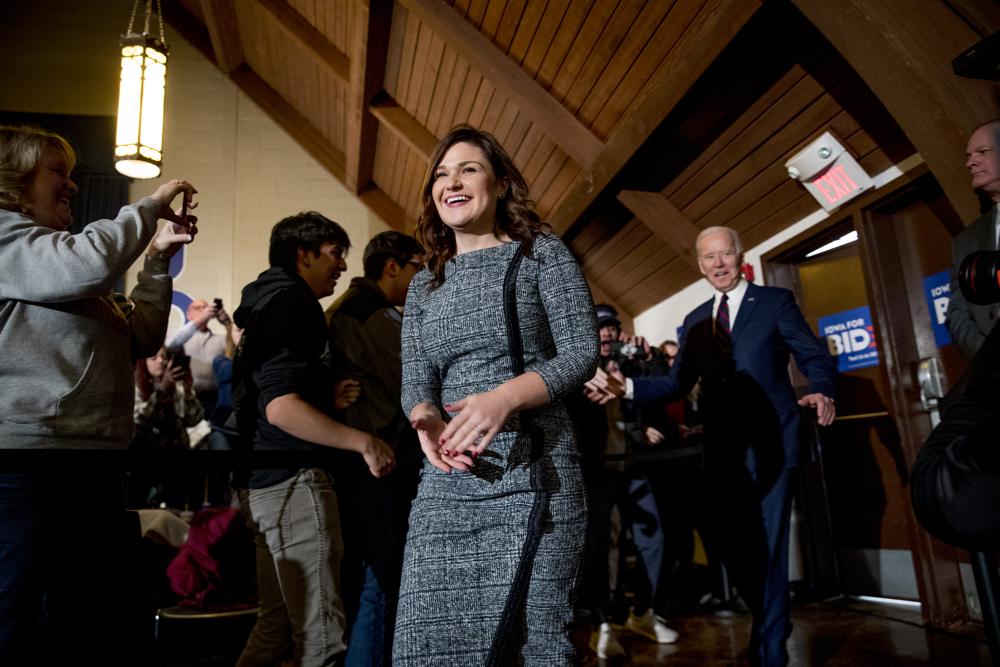 FILE - In this Saturday, Jan. 18, 2020 file photo, Rep. Abby Finkenauer, D-Iowa, left, and then Democratic presidential candidate former Vice President Joe Biden, arrive at a campaign stop at Simpson College in Indianola, Iowa. A state court judge has concluded that Democrat Abby Finkenauer cannot appear on the June 7 primary ballot for U.S. Senate, knocking off the candidate considered by many to be the party's leader in the effort to challenge U.S. Sen. Charles Grassley. (AP Photo/Andrew Harnik, File)

Finkenauer’s campaign was thrown into turmoil this week after a judge overturned a panel’s decision that she had qualified for the ballot. Finkenauer, a former one-term congresswoman, called the ruling “deeply partisan” and appealed to the Iowa Supreme Court.

The court, under pressure to rule quickly to meet deadlines to mail ballots to Iowa residents who live out of the country, will hear arguments Wednesday and likely will issue a decision within days. The state’s primary is June 7.

Here’s what you should know about the challenge to Finkenauer:

WHAT ARE THE LEGAL ARGUMENTS?

Two Republicans who have served as county election officials in Iowa challenged several signatures on Finkenauer’s nomination petitions. They claimed that three signatures out of the 5,000 obtained by Finkenauer’s campaign were not properly dated, as required by state law. Without the signatures from rural Allamakee and Cedar counties, Finkenauer didn’t meet a requirement that at least 100 signatures come from at least 19 counties.

A three-member State Objections Panel voted 2-1 last week to reject the arguments, saying the panel has historically favored ballot access and given campaigns deference if they substantially complied with the nomination petitions law. Secretary of State Paul Pate, a Republican, voted against Finkenauer, but Attorney General Tom Miller and state Auditor Rob Sand, both Democrats, voted in favor of placing her on the ballot.

In 2020, the same three officials rejected challenges to the nomination petitions of four Republicans running for Congress that also included at least one case of a missing date. The panel’s decision was not challenged further, and all four candidates, including then-state Sen. Randy Feenstra and then-U.S. Rep. Steve King, stayed on the ballot. Feenstra ultimately won the election.

This year, the panel’s 2-1 decision was challenged, and the case ended up before District Judge Scott Beattie, a 2018 appointee of Republican Gov. Kim Reynolds. He disagreed with the panel, abiding by a strict reading of the law that requires each signature line to also have the date the petition was signed. His ruling eliminated the three signatures, leaving Finkenauer two counties short of the 19-county requirement.

ARE PARTISAN POLITICS TO BLAME FOR THE JUDGE’S RULING?

Finkenauer and other Democrats think so. Finkenauer, who in 2018 at age 29 became the second-youngest woman ever elected to Congress, said Judge Beattie “did the bidding of Chuck Grassley and his allies in Washington.” Iowa Democratic Senate leader Zach Wahls called the ruling a “dangerous injection of partisan politics into the ballot qualification process.”

But others said Finkenauer should acknowledge her own mistake in not gathering more signatures in case any ended up being thrown out.

“Regardless of which party you’re from, candidates seem to get fixated on hiring staff, raising money and building websites, and forget that small detail called getting on the ballot,” said Randy Evans, executive director of the Iowa Freedom of Information Council, which represents media organizations and advocates for government transparency.

He also faulted her for being too quick to assume the judge had partisan motives, noting that it was a Republican-appointed Iowa Supreme Court justice who wrote the 2009 unanimous opinion that legalized gay marriage in the state. The same chief justice, the late Mark Cady, wrote the 2018 majority opinion that Iowa’s constitution allows the right to an abortion.

But the challenge itself was undoubtedly political. It was brought by two Republican county election officials represented by lawyer Alan Ostergren, who has supported conservative causes and represented former President Donald Trump’s campaign to nullify absentee ballots in Iowa. It’s not uncommon in Iowa for political activists to challenge the nomination papers of opposite party candidates to knock them off a ballot, so the process is part of Iowa politics.

The Iowa Supreme Court decision, however, could change the landscape for such objections if it upholds the judge’s decision and requires strict adherence to the letter of the law rather than allowing the “substantial compliance” standard to stand.

Although Republicans have previously benefited from the substantial compliance standard, Iowa Republican Party Chair Jeff Kauffman put all the blame on Finkenauer.

“Abby Finkenauer made the fundamental, ridiculous, illogical decision to not get more signatures that every city council member, every single supervisor, every legislator does in case this comes up,” Kauffman said. “This didn’t need to happen.”

Although Finkenauer is the best-known Democrat in the race, her opponents question whether she is the strongest candidate to take on Grassley, who has held elected office since 1959 and will be heavily favored to win another Senate term.

Finkenauer, now 33, lost her reelection bid in 2020 after serving just one term in Congress representing a district anchored by the Cedar Rapids and Waterloo metro areas.

She won the seat by 5 percentage points in 2018 by knocking off a Republican incumbent but lost by 2.6 points to Republican Ashley Hinson, a former TV news anchor, in 2020.

Since then, Franken has kept pace with Finkenauer’s fundraising, taking in $1.8 million, just behind Finkenauer’s $1.9 million. Franken also reported having $1 million in his campaign account as of March, compared to Finkenauer’s roughly $724,000.

“I do think Franken has broader appeal and would be a stronger candidate in Iowa against Grassley,” said Nancy Bobo, a longtime Des Moines area Democratic activist and Franken’s Polk County campaign chair. “He’s just as strong as he can be.”

Grassley, who will turn 89 in September, is seeking his eighth term in office. He had $3.7 million in the bank as of March and is viewed favorably by 47% of Iowans and unfavorably by 41%, according to The Des Moines Register’s Iowa Poll, conducted in late February and early March.