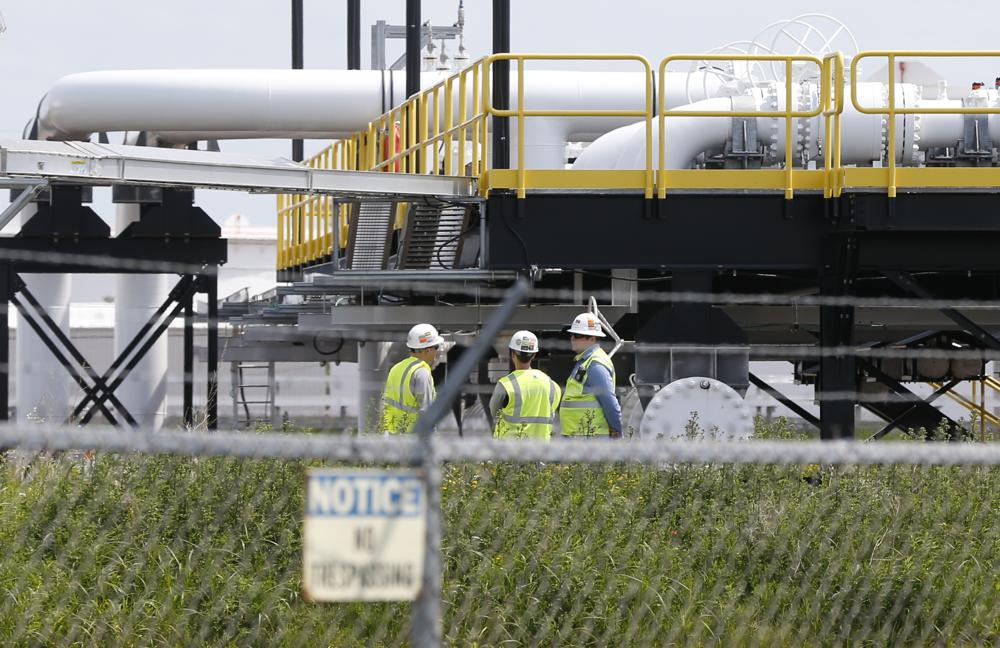 FILE - In this June 29, 2018 file photo, workers are visible at the Superior terminal of Enbridge Energy in Superior, Wis. Enbridge says the upgrade and expansion of its Line 3 pipeline across Minnesota is complete and will become operational on Friday, Oct. 1, 2021. The Canadian-based company's President and CEO Al Monaco said in a statement Wednesday that the pipeline “will soon deliver the low-cost and reliable energy that people depend on every day.” (AP Photo/Jim Mone File)

MINNEAPOLIS (AP) — Enbridge Energy said it has stopped the flow of spilled artesian groundwater that began a year ago when workers installing the Line 3 oil pipeline in northwestern Minnesota punctured an aquifer.

The spill near Enbridge’s terminal in Clearbrook was one of the worst environmental accidents during construction of the 340-mile pipeline in Minnesota. Workers dug too deeply into the ground and the rupture resulted in a 24 million gallon groundwater leak.

The company told the state Department of Natural Resources that it stopped the uncontrolled leak on Tuesday. The DNR said it will monitor the repair and the investigation remains ongoing. The agency is looking at further restoration, mitigation and penalties.

The White Earth Band of Ojibwe and other pipeline opponents have been doing their own investigation, including drone footage, to check for further water impacts. They are calling for more accountability and details about the incident.

State regulators ordered Enbridge to pay $3.3 million and fix the damage. The company missed a deadline in October and paid an additional $40,000.

The DNR said the repair took time because the problem was so complex.

Winona LaDuke, head of Honor the Earth and a leading voice in the fight against the pipeline, said she’s skeptical of Enbridge’s repair.

“They were not even transparent about having created the fiasco,” LaDuke said. “If it’s true that they stopped the leak with the thumb in the dike, that’s great. We want it stopped. It took a year. You don’t get a medal for that. We have no idea of the damage.

“What’s the value of destroying an aquifer? How does that get set?”

LaDuke also pointed out the irony of her heading to court next week on trespassing charges after being arrested during Line 3 demonstrations.

“Where’s Enbridge’s charges? I’m not the criminal,” LaDuke said. “I was defending the waters of Minnesota.”

The repairs also finished up right after her group made some news, which she thought was also a bit more than a coincidence.

“It [the water] ran for a year and lo and behold, unsurprisingly, it’s fixed just when we made public our event,” Goodwin said.

Line 3 starts in Alberta, Canada, and clips a corner of North Dakota before crossing Minnesota en route to Enbridge’s terminal in Superior, Wisconsin. The project was pronounced complete in September.