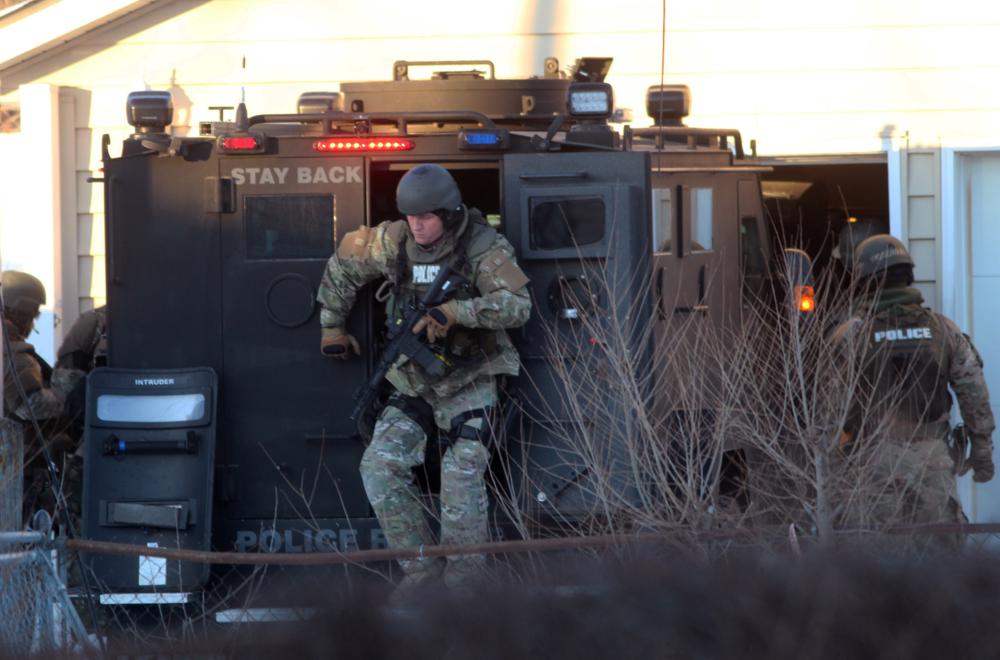 Waterloo police tactical officers arrive at the scene of a standoff in in Waterloo, Iowa, on Wednesday, Jan. 19, 2022. A Wisconsin man accused of killing his girlfriend and trying to kill his teenage daughter in a double shooting in Milwaukee has been arrested following an hourslong standoff in northeastern Iowa. (Jeff Reinitz/The Courier via AP)

WATERLOO, Iowa (AP) — A Wisconsin man accused of killing his girlfriend and trying to kill his teenage daughter in a double shooting in Milwaukee has been arrested following an hours-long standoff in northeastern Iowa.

Simone Hughes, 47, of Milwaukee, was arrested Wednesday morning at a Waterloo, Iowa, home after he held officers at bay for eight hours in sub-zero temperatures, the Waterloo-Cedar Falls Courier reported.

Milwaukee police have said Hughes was wanted on first-degree intentional homicide for the Jan. 6 shooting death of 41-year-old Quinette Walters outside their Milwaukee home. Hughes then shot and injured his 14-year-old daughter as she fled the home, police said. He faces an attempted first-degree murder charge in that shooting.

Police in Waterloo said the standoff began around 1:30 a.m. Wednesday after they got a tip Hughes was in the home and officers went there in an effort to get Hughes to surrender. Police said Hughes was the only person in the house and that he told police he was armed.

Police said at some point that Hughes hid in a vehicle in a garage until he was taken into custody around 9:30 a.m. He was taken by ambulance to a local hospital for observation because he had made threats to harm himself, police said.