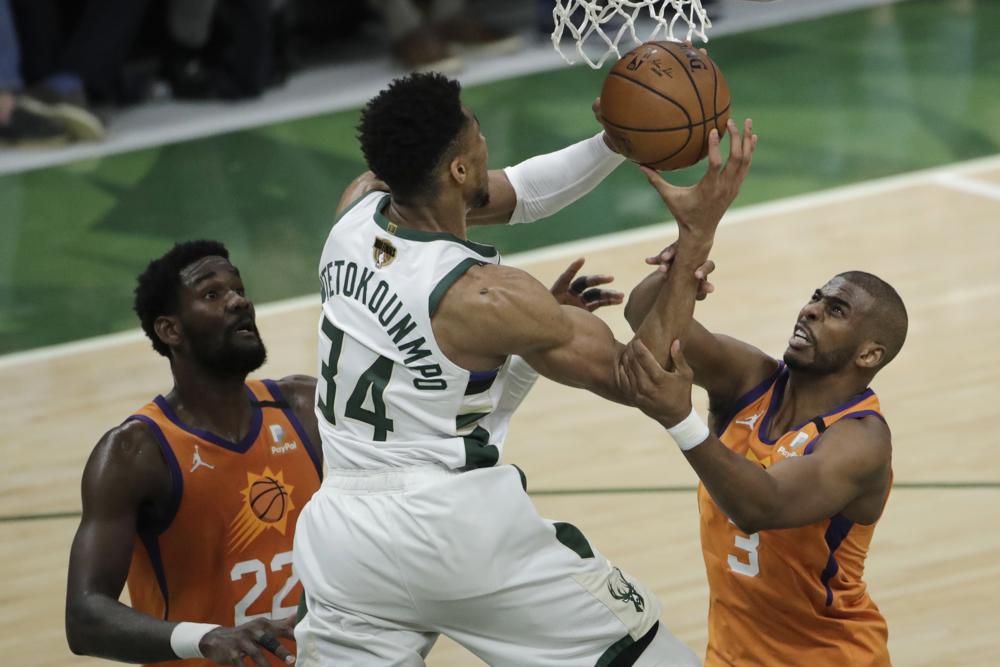 The defending champions are beginning to look the part again.

It wasn’t long ago that the Milwaukee Bucks were languishing under .500, but after a seven-game winning streak, they’ve moved back toward the top of the Eastern Conference standings. Milwaukee’s run has been overshadowed a bit by Phoenix’s 16-game winning streak and Golden State’s 18-2 start to the season. Now, the Bucks — and their conference finals opponents, the Atlanta Hawks — are showing signs that they’ve shaken off their early struggles.

“At the start of this season, going through some trying times, I think we were all just happy it was at the beginning of the season,” guard Jrue Holiday said. “We know how this league goes, how the games go. It’s always ebbs and flows. We know that we can make a run at any time.”

The Bucks haven’t lost a game when Holiday, Giannis Antetokounmpo and Khris Middleton have all played. Holiday missed about two weeks early in the season with a sprained ankle, and when he returned, Milwaukee blew a 21-point lead in a Nov. 5 loss to the Knicks.

When Milwaukee faced Atlanta in a conference finals rematch Nov. 14, the Hawks were on a six-game losing streak and the Bucks entered the game at 6-7 on the season. Atlanta won by 20, the start of a seven-game winning streak that pushed the Hawks back above .500. That run ended Saturday, but Milwaukee hasn’t lost since that blowout against Atlanta.

The Bucks’ streak began when Middleton returned from an eight-game COVID-related absence Nov. 17. Antetokounmpo scored 47 points in a win over the Los Angeles Lakers.

While the Warriors and Suns have opened up some distance on the rest of the West, the Bucks (13-8) are one of four teams within 1 1/2 games of East-leading Brooklyn (14-6). There have been some surprises at the top of the conference. Chicago (14-8) and Washington (13-8) have had early success after significant offseason changes, and Charlotte (13-10) isn’t far behind.

That’s not how the top half of the conference was necessarily expected to look, but it took a little while for Milwaukee to hit its stride, and even after its recent winning streak, Atlanta (11-10) isn’t above the play-in zone. Philadelphia (11-10) has lost 8 of 11.

It’s not a shock to see the Bucks look less than dominant from time to time. They finished with the seventh-best record in the league last season before winning the title as a No. 3 seed.

Recently, they’ve taken advantage of a fairly favorable schedule. The first five games of their winning streak were at home, when they faced the Lakers with LeBron James out, then Oklahoma City, Orlando twice and Detroit. Then they went on the road and beat Denver with Nikola Jokic ou t before winning at Indiana.

“Maybe we just kind of wear ’em down with Khris and Giannis, then Jrue comes and one of them hopefully breaks the wall, breaks the dam,” coach Mike Budenholzer said. “We’re able to get some separation.”

“Just the connectivity, guys working and covering for each other and scrambling,” Budenholzer said. “Jrue at the front of the defense and I think Bobby (Portis) is improving and giving us lots of little things and plays and effort. Guys are just competing, trying to get stops.”

The highlight of the Bucks’ upcoming schedule, however, may be a pair of meetings with Miami (13-8) in a span of five days — on Saturday night at Milwaukee and then Dec. 8 at Miami.

When the teams met Oct. 21, the Heat won 137-95 over a Milwaukee team that was missing Holiday, Portis and Brook Lopez. Antetokounmpo and Middleton played less than half that game with the score out of hand.