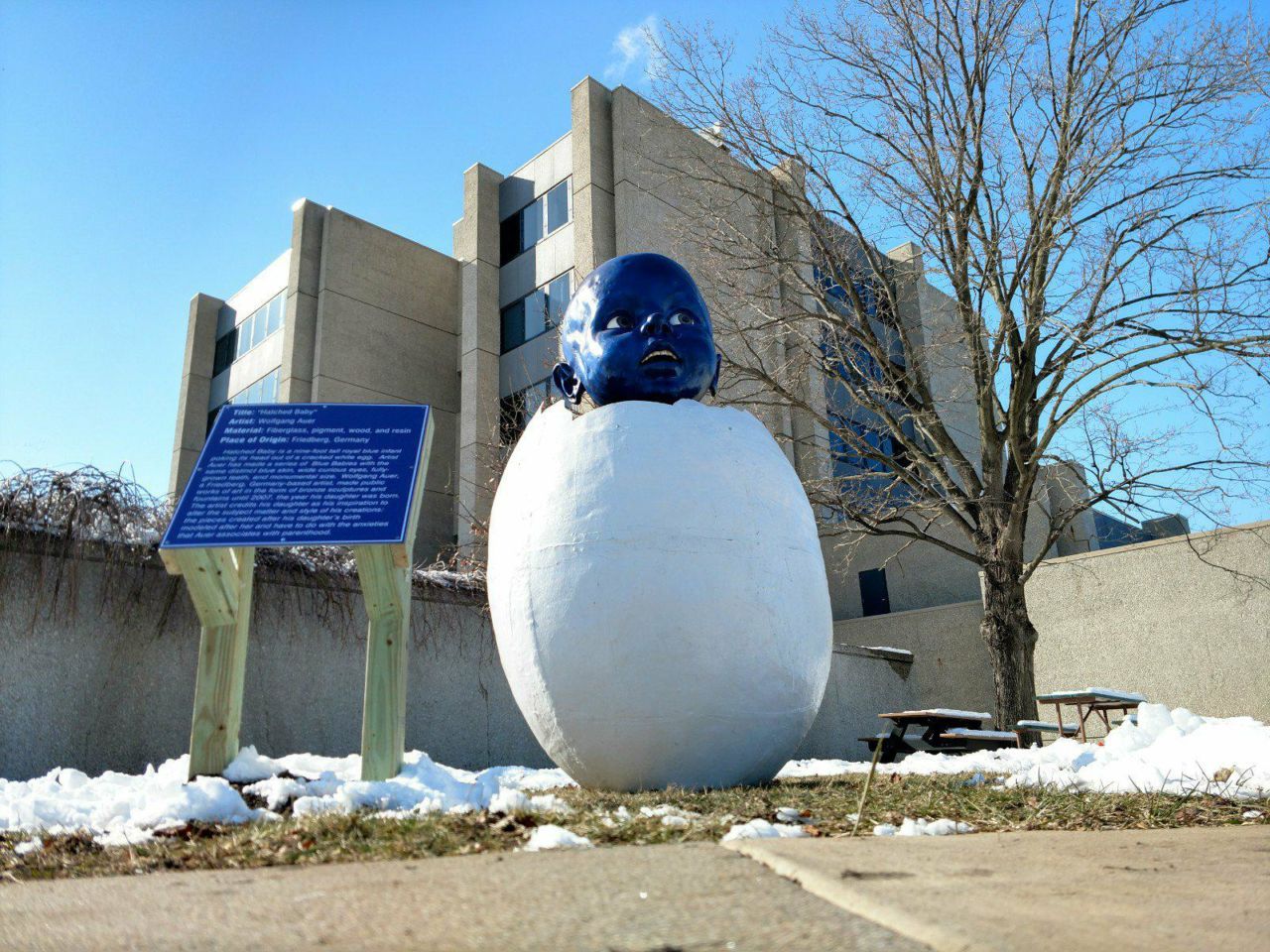 Turns out, sending a popular social media account pictures of items you vandalized and stole isn’t a great idea.

It likely comes as no surprise to anyone that is how La Crosse Police tracked down those who vandalized the Hatched Baby statue outside the department back in September and stole the face. Police had no video. Though cameras are in that area, they were not functioning at the time.

For those who don’t know, Hatched Baby was a 9-foot tall statue of a blue baby’s head coming out of an egg and has since been deemed irreparable by the artist who donated it in 2017.

Matthew Reich was one of two arrested — the other being Caden Boge — in the incident.

Before that warrant came in, however, police were already receiving tips that they recognized the rooms from the Instagram post, where Hatched Baby’s face was lying.

One witness said the post “resembled the laundry room in (their) apartment from the year prior,” and gave their address and old photos of that laundry room.

Police submitted warrants to Facebook in mid-September, requesting messages sent to the popular local Instagram site. On Oct. 25, the records request was granted — a 258-page PDF to review. Reviewing the doc, Hatched Baby came up on page 204, where messages and photos from Reich were sent around 5 p.m. Sept. 12. Police had discovered the damage at 7:15 a.m. that day.

A conversation between Reich and the popular Instagram account included them telling Reich that he should probably “return the baby.”

Reich does message back saying he “wasn’t the one who took it,” and later says, “it’s all worked out and the police have it back.”

What Reich is referring to there is he and Victoria Rodewald — who was cited for possession/receiving stolen property — discarding the Hatched Baby’s face the next day in some guy’s yard on King Street. Police got a call from the homeowner, notifying them it was in his lawn.

Because police had Reich’s name and that he was a UW-L student, they tracked him down through his class schedule.

On Oct. 26, police missed him after one class, but at the next, asked the professor to take attendance and Reich was identified. He then was escorted out of class to the UW-L police department, where he told his version of the story.

During the interview, Reich told police he was the one that damaged Hatched Baby.

“(I) basically, like, leaned up against it, like, I wasn’t trying to do anything harmful, I wasn’t trying to, like, damage it, per se. If I’m being honest, like, my memory is vague, cuz I was very drunk, but he said that I basically leaned on it, like got on it and it fell out and we left.”

The rest of Reich’s story leads police to Rodewald. The two just happen to be neighbors. In their versions of the story, Reich had damaged the baby and Rodewald had later found it near the egg. But the two incidents were not related.

Rodewald’s story to police was not initially truthful, but when she was going to be implicated in stealing the face, she admitted it was her boyfriend, Boge, who had taken it sometime after Reich had damaged it.

When Rodewald and Boge got back home, Boge felt guilty for taking it and ended up putting the face in some bushes next door, where, coincidentally, Reich lives. Reich found it, brought it inside and took the infamous pictures. The next day, he rode with Rodewald to get rid of the face.

Hatched Baby has since been taken down. Creator Wolfgang Auer, who donated it to the city back in 2017, said it could not be repaired. It had been up near the police department since 2018, basically the unofficial mascot of the La Crosse Police Department.