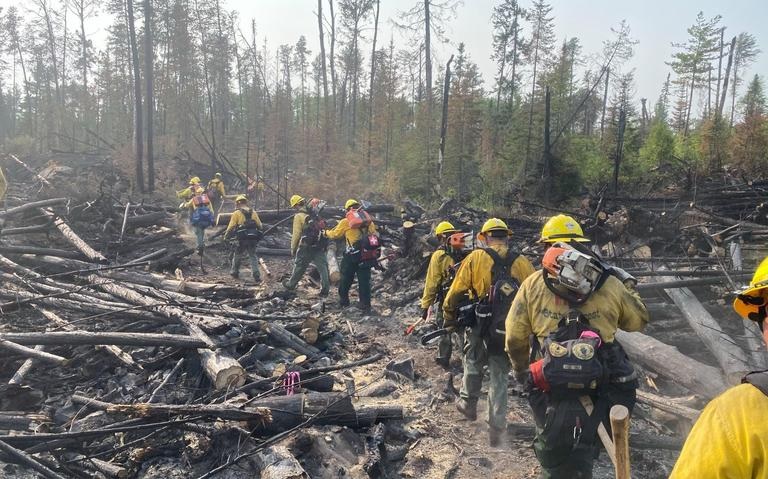 Wildland firefighters hike in to battle the Delta fire about 20 miles east of Ely on the edge of the Boundary Waters Canoe Area Wilderness earlier this week. Access to the lightning-sparked blaze has been hampered by trees downed in a 2016 windstorm that hit the area. The fire is holding at about 65 acres, but conditions across northern Minnesota remain tinder-dry. (Photo courtesy of the U.S. Forest Service)

ELY, Min. (AP) — Superior National Forest officials say they are expanding their closure order for the popular Boundary Waters Canoe Area Wilderness north of Ely because of the threat of wildfires burning across the Canadian border.

The newly expanded order, which took effect Sunday, includes 12 more BWCA entry points and the area around Lac la Croix, in addition to the areas around Crooked and Iron lakes that had previously been included. It now stretches east nearly to Basswood Lake, west nearly to Crane Lake, and south to the Echo Trail, Minnesota Public Radio News reported.

Authorities say wildfires burning unchecked just across the border in Ontario’s Quetico Provincial Park could cross into the BWCA. Forest Service officials say the new order is meant to give campers time to leave the area.

The closure order will last at least seven days, or until the fire danger has subsided.

“Recent reconnaissance flights conducted by fire managers have indicated an increase in fire behavior (in Quetico), despite the lighter winds; and fuels in this area are pre-heating and becoming more volatile,” Superior National Forest officials said in a release Saturday night.