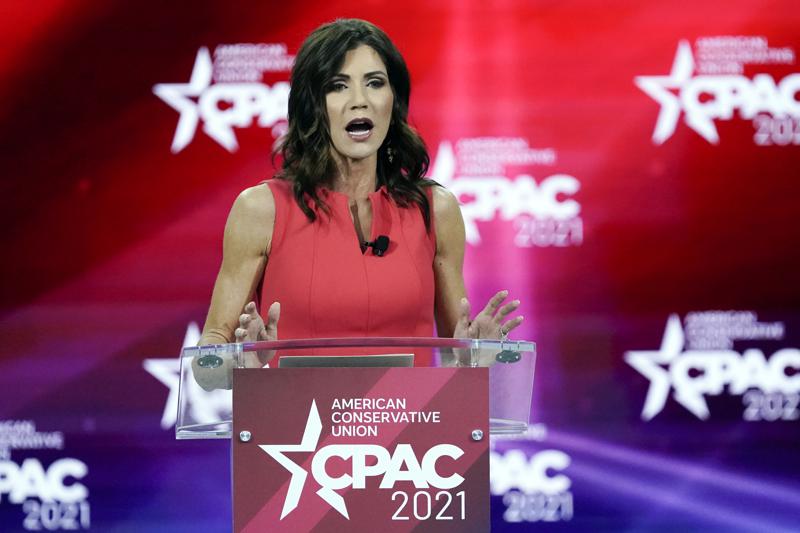 SIOUX FALLS, S.D. (AP) — South Dakota Gov. Kristi Noem said Tuesday she will use a donation from a Republican donor to fund a deployment of up to 50 South Dakota National Guard troops to the U.S. border with Mexico.

Noem joined a growing list of Republican governors promising to send law enforcement officers to Texas as the GOP ramps up a political fight with President Joe Biden over border security. The issue has drawn a host of prominent GOP figures: Former President Donald Trump was expected to travel to the border this week and Republican governors from Arkansas, Florida, Nebraska and Iowa have all committed to sending law enforcement officers for border security.

Noem’s spokesman Ian Fury said the governor decided to fund the deployment with a private donation “to help alleviate the cost to South Dakota taxpayers,” but declined to provide estimates on the cost of the deployment, citing “security reasons.”

Willis and Reba Johnson’s Foundation made the donation directly to the state, Fury said. Willis Johnson, a Tennessee-based billionaire, is the founder of an online used-car auction called Copart. He regularly makes large contributions to Republicans, including $200,000 to the Trump Victory Committee last year.

Johnson said he approached Noem about making a donation after hearing about Texas Gov. Greg Abbott’s border barrier push. He figured Texas “has plenty of money” so he decided to help Noem, who governs a state with a significantly smaller budget. He also said he had no plans to donate to other states to send law enforcement officers to the border.

Johnson added that he would have preferred to stay anonymous but that Noem’s office told him they had to at least disclose his name. He declined to say how much he was giving.

“America gave a lot of money to get that border wall done,” Johnson said. “It takes private individuals now.”

Noem, a potential presidential contender, drew a distinction between her decision to send the National Guard and other governors who are sending state police officers.

“The border is a national security crisis that requires the kind of sustained response only the National Guard can provide,” she said in a statement. “We should not be making our own communities less safe by sending our police or Highway Patrol to fix a long-term problem President Biden’s Administration seems unable or unwilling to solve.”

But Democratic state Sen. Reynold Nesiba said the fact Noem is using a donor to pay for the deployment shows it is not a “real priority” for the state, but instead gives her “political cover.” He said he was looking into whether using a private donation to fund the deployment is legal.

“This could set a dangerous precedent to allow anonymous political donors to call the governor and dispatch the Guard whenever they want,” he said.

The federal government usually pays for National Guard deployments to other states. When troops respond to an in-state emergency, they are paid from state government funds, according to Duke Doering, a historian with the South Dakota National Guard Museum. He said he had never heard of a private donor funding a deployment.

“This kind of floors me, when you’re talking about a private donor sending the Guard, that doesn’t even make sense to me,” Doering said.

The South Dakota National Guard is expected to deploy for 30 to 60 days, Noem said, while the other states involved are sending law enforcement officers for roughly two-week stints.

Abbott this month announced plans to build more barriers along the border. Abbott’s new push has been criticized as political theater, but he defended the plan, saying the number of border crossers remains high. The governor said he will use $250 million in state money and crowdsourced financing for the barriers, although the timeline and cost for the push are unclear. It also faces potential court challenges from the federal government.

Meanwhile, Arkansas Gov. Asa Hutchinson on Tuesday authorized a 90-day deployment of up to 40 National Guard troops to the border. His office said the deployment is not being paid for by a private donor.

Iowa has sent about 25 State Patrol officers to the border under a national interstate mutual aid network called an Emergency Management Assistance Compact. Under the compact, Texas has agreed to reimburse Iowa for the expense of the state troopers, though Iowa is paying expenses for the state troopers initially. The Iowa National Guard also has 24 soldiers providing assistance to law enforcement at the border under a federally-funded activation in response to a Trump administration request in October 2020.

A spokesman for the Nebraska State Patrol, which has sent 25 troopers to Texas, said it has not received any private donations for the deployment.

Large numbers of migrants have been showing up at the U.S. border with Mexico, with many turning themselves over to U.S. Border Patrol agents in seeking legal asylum status. But the numbers of families and children traveling without their parents crossing into the U.S. have dropped sharply since March and April, while the encounters with single adults have remained high.