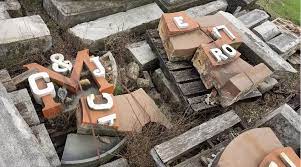 Some pieces of a former brewery in La Crosse could be seen downtown again soon.

The city board of public works has approved an offer by Big Al’s owner Ryan Johnson to take terra cotta fragments which used to be part of the Michel Brewery Arch on 3rd Street.

The brewery was torn down in 1997 as part of a car dealership expansion, and parts of the arch have been stored on Isle La Plume at the sanitary sewer plant.

Johnson reportedly plans to install the terra cotta on the south side of the Big Al’s building, facing an outdoor seating area.

Tim Acklin from the planning department says other people have shown interest in acquiring parts of the Michel stone arch, but part of the difficulty in finding new owners has been the ability to move such large pieces of stone.