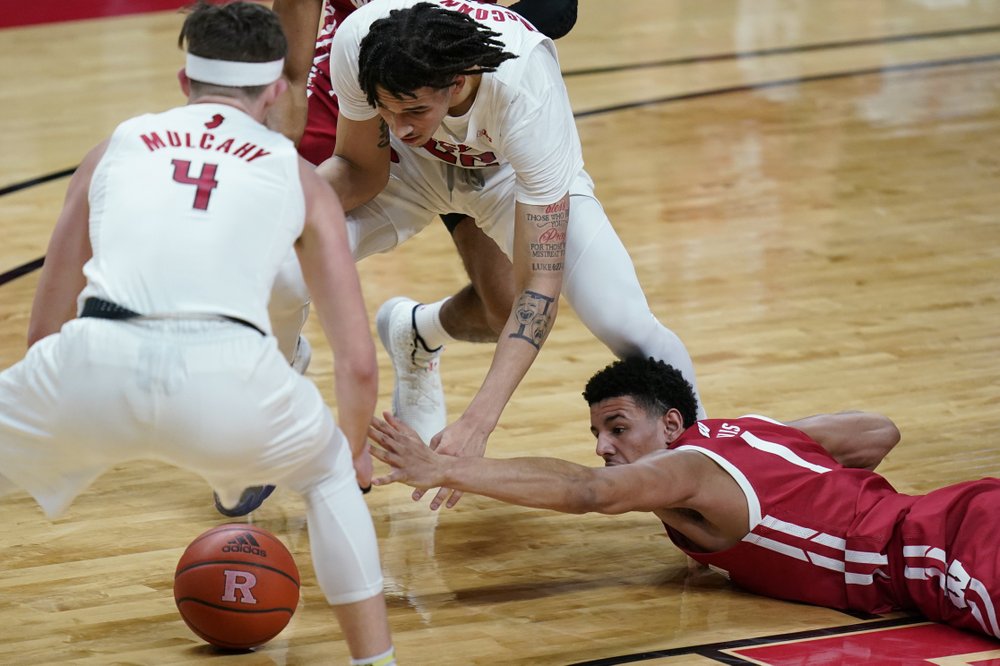 Wisconsin's Jonathan Davis, right, grabs for a loose ball, between Rutgers' Paul Mulcahy (4) and Caleb McConnell during the first half of an NCAA college basketball game against Rutgers, Friday, Jan. 15, 2021, in Piscataway, N.J. (AP Photo/Seth Wenig)

PISCATAWAY, N.J. (AP) — D’Mitrik Trice had 13 points and five assists and turned in a strong second half to lead No. 9 Wisconsin past Rutgers 60-54 on Friday night.

In those 11 minutes, Davis had four fouls. He was coming off his first-ever scoreless game, going 0-for-6 in the loss to No. 7 Michigan. Before that, Davis was just 2-for-11 against Indiana, scoring six.

Trice scored eight points and assisted on another basket in a 12-0 run that gave Wisconsin a 54-44 lead with 4:19 to go.

“It was good for him to step up at the right time, which senior point guards — good one’s tend to do,” Wisconsin head coach Greg Gard said.

“It was the typical, at the RAC rock fight,” Gard said. “Physical, tough. A lot of grit and determination exhibited tonight.”

Jacob Young led Rutgers with a game-high 17 points, while the Scarlet Knights out-rebounded the Badgers 50-35. Rutgers has lost five of six.

“The ball just didn’t go in. I thought we got a lot of good looks,” Rutgers coach Steve Pikiell said. “We looked like Rutgers defensively and rebounding-wise and that’s a positive.”

Wisconsin: The Badgers didn’t look like a top-10 team in a blowout loss at No. 7 Michigan earlier in the week, but returned to form against Rutgers. The win may not keep them in the top 10, but it got the Badgers back on track.

Rutgers: The Scarlet Knights are finally at full strength. Highly touted recruit Cliff Omoruyi returned after missing the last five games with a sprained right knee. It’s the first time Rutgers has been healthy all season. Now, Rutgers needs to find a way to win after losing five of six games and falling out of the Top 25.

POINTS IN THE PAINT

Rutgers scored 42 of its 54 points in the paint, while Wisconsin had just 18 points.

“Everybody has a hard time keeping them out of the paint. That’s their point of attack. They get it to the bigs and they try to drive it with all three perimeter guys,” Gard said.

Wisconsin was crushed by No. 7 Michigan to start the week, but shouldn’t tumble too far with the bounce-back win. Meantime, Rutgers was unranked for the first time this season, and will now have a harder time climbing back into the Top 25.

Rutgers: At Penn State on Thursday.