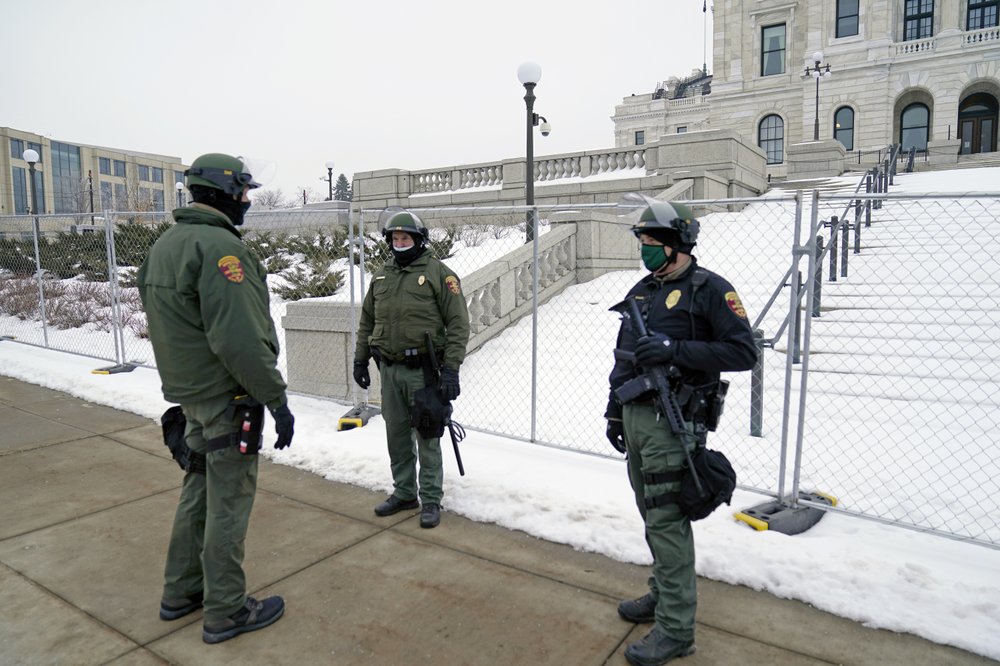 MINNEAPOLIS (AP) — Authorities now believe there is no credible, immediate threat from extremists to Minnesota in the runup to President-elect Joe Biden’s inauguration, Public Safety Commissioner John Harrington said Friday, but he made clear that law enforcement won’t be taking any chances.

The FBI this week warned of potential attacks at state capitols nationwide following the insurrection at the U.S. Capitol by supporters of President Donald Trump. That followed a bulletin from the FBI Minneapolis field office late last month about potential threats from the right-wing Boogaloo movement to the Minnesota and Michigan capitols this Sunday.

The warnings and the violence in Washington, D.C., led Gov. Tim Walz to call up the Minnesota National Guard to bolster state and local law enforcement at and near the state Capitol for this weekend and through Wednesday’s inaugural.

At a news conference called to show a united front, Harrington said the Dec. 29 FBI bulletin is now “really pretty dated.” But the commissioner said the head of the Minneapolis FBI office told him Friday morning that “there is no credible, local, immediate threat to the state of Minnesota.

“That does not mean that there wasn’t a threat back in December when that information was developed.. … Since that time circumstances have changed,” the commissioner said without elaborating.

“We will keep the peace in the days that lead up to the inauguration in D.C., and we are prepared to keep the peace as long as it takes,” he said, accompanied by Walz and other state and local officials.

Hold the Line MN, a pro-Trump group that held a “Storm the Capitol” rally at the state Capitol last week, has permits for two small events Saturday and Sunday on the Capitol grounds, a “Freedom Fest” for Saturday and a prayer gathering on Sunday. Security officials asked Minnesotans on Thursday to consider staying away from the Capitol complex unless they have specific business there. But Harrington said there are no plans to order a weekend curfew.

“I really want people to understand that all hands will be on deck and we will be safe,” said St. Paul Police Chief Todd Axtell, who added that he has consulted with capital city police chiefs across the country who are preparing.

The Minnesota National Guard is providing a military police company of just over 100 members to beef up security at the state Capitol, where the State Patrol is in charge with help from other agencies. The Guard is also sending more troops to protect the inaugural activities in Washington. It’s now providing more than 850 troops, said the state’s adjutant general, Maj. Gen. Shawn Manke. That’s up from the more than 130 that the Guard said it was sending earlier this week.

“We are not panicking. We are concerned, we are alert and we are prepared,” Lt. Gov. Peggy Flanagan said.