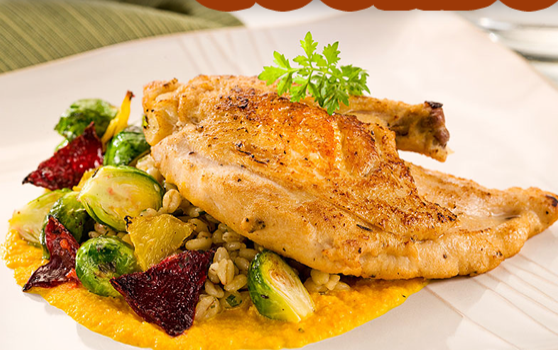 As Thanksgiving holiday celebrations are trimmed down, America’s Largest Pheasant Farm is adding a new, flavorful bird to family plates.

The COVID-19 pandemic changed the business model for MacFarlane Pheasants in Janesville as more people have been asking for pheasant. Ryan George, the food products business manager, said their typical clientele includes cruise lines and white table restaurants on the coast.

“Obviously, cruise lines aren’t running,” George said. “Who knows when they’ll be up and running and buying those high-end menu items again, so we’ve really shifted into more retail and online type sales.”

The Thanksgiving holiday has been a prime example of a market that worked well to drive a market for pheasants. MacFarlane already had a strong online presence and was established in different grocery stores nationwide, but they have been adding more stores to that list since March.

“We’re getting on the shelves anywhere we can just to promote pheasant because frankly, a lot of people don’t think of it as an option or are not familiar with it,” George said.

They also added new products to the lineup such as pheasant bratwurst, snack sticks, and summer sausages that helped gain more entry into those stores.

“People are more willing to try a pheasant bratwurst and then enjoy it, and then they come back and get a whole bird or smoked pheasant the next time,” George said.

Comparing a pheasant to its close relative, the turkey, George said one of the biggest misconceptions is that a pheasant is dark meat. He said pheasant is actually all white meat.

“Pheasant has the biggest percentage of breast meat per the whole bird of any other poultry in the market today,” George said. “It is a very flavorful, really a full-textured product. Pheasant’s closest relative is a turkey, so it is very fitting that we’re talking about this right now.”

The birds are also ideally sized for smaller gatherings running from about 2 pounds to 4.5 pounds. Those with questions about cooking pheasants can find information from MacFarlane Pheasants online.

In addition to selling meat products, MacFarlane Pheasants also noticed an uptick in people looking for chicks and birds to raise.

“Our chick sales are season in the spring and early summer,” George said. “We saw more and more orders of the small, 50 and less, chicks. We’re looking at an excellent year of selling chicks, and maybe some of that is a lot of the chicken hatcheries basically ran out of inventory, and so people were looking for other chicks to maybe raise this year. People are more willing to know where their food comes from and do some of their production themselves.”

Macfarlane Pheasants is a family-owned business that started in 1929. The family and employees raise pheasants from birth on more than 200 acres of land. They have business with human edible foods, crate pheasants, as well as pet food products. They also have a mature pheasant program through which they stock public and private lands all over North America.