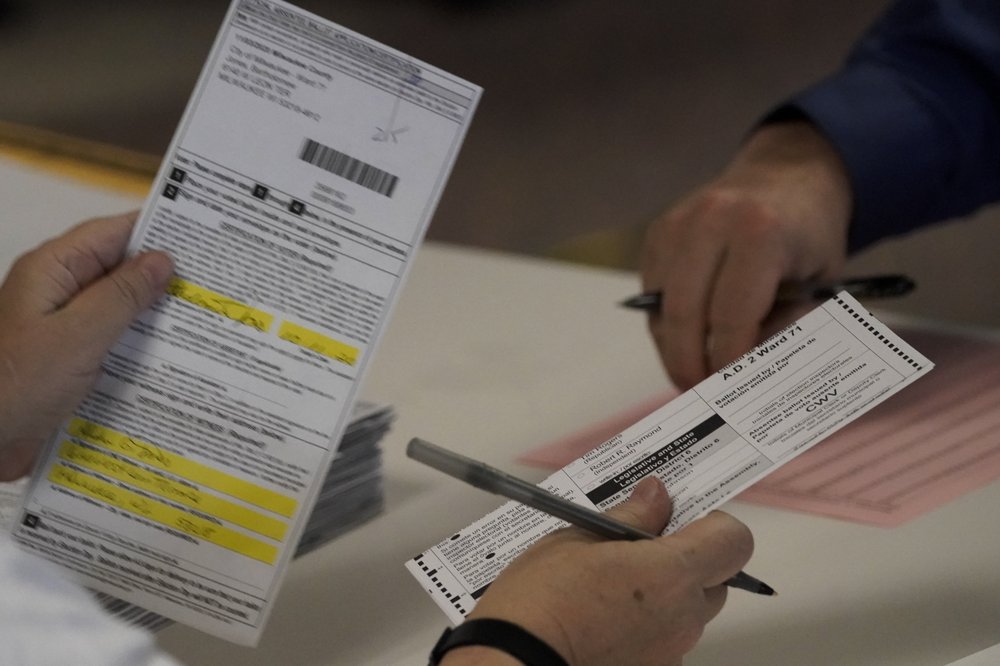 FILE - In this Nov. 3, 2020 file photo, workers count Milwaukee County ballots on Election Day at Central Count in Milwaukee. President Donald Trump's campaign has paid $3 million for a recount of two heavily Democratic Wisconsin counties, saying Wednesday, Nov. 18, 2020, that they were the site of the "worst irregularities" although no evidence of wrongdoing has been presented and state elections officials have said there was none. (AP Photo/Morry Gash File)

The order, required by law after Trump paid $3 million for the recount, was agreed to after rancorous debate for more than five hours Wednesday night that foreshadows the partisan battle ahead.

“It’s just remarkable the six of us in a civilized fashion can’t agree to this stuff,” Democratic commissioner Mark Thomsen said hours into the debate. The commission is split 3-3 between Democrats and Republicans.

The recounts in Milwaukee and Dane counties, where Joe Biden outpolled Trump by a more than 2-to-1 margin, will begin Friday and must be completed by Dec. 1. Milwaukee County officials said they plan to finish the recount by Wednesday. Dane County Clerk Scott McDonell said “it would be great to be done by Thanksgiving,” but he didn’t have an estimate for when the work would conclude.

Biden won statewide by 20,608 votes. Trump’s campaign has cited “irregularities” in the counties, although no evidence of illegal activity has been presented.

“We understand the eyes of the world will be on these Wisconsin counties over the next few weeks,” Meagan Wolfe, Wisconsin’s top elections official, said Thursday. “We look forward to again demonstrating the strength, security, integrity and transparency of our election systems in Wisconsin.”

The commission argued over changes to its manual that provides guidance to local elections officials over how to conduct recounts. Ultimately, they decided not to reference the manual in the order, but they did update some parts to reflect accommodations for the coronavirus pandemic.

The commissioners deadlocked on making changes to the manual that Democrats and elections commission staff said would bring the guidance into line with current state law. Republicans balked, saying the guidelines should not be changed after Trump filed for the recount.

Their inability to agree leaves in place guidance that says absentee ballot applications must be approved as part of the recount, even though commission staff said that’s not required under the law.

Democratic commissioners said they were certain the recount was headed to court even though Trump’s claims were without merit.

Board Chair Ann Jacobs, a Democrat, said Trump’s allegation that election clerks mailed thousands of absentee ballots to voters who hadn’t requested them was “absurd,” “factually bizarre” and a “vague, paranoid conspiracy.”

“What we ought not be doing is watering that plant of baloney,” she said.

Republican commissioners Dean Knudson and Bob Spindell questioned whether election observers would be treated fairly by Democratic county clerks in Milwaukee and Madison. At one point, Knudson even appeared to question whether absentee ballots requested through the elections commission’s state website were invalid because of how the requests are recorded.

“I hope we haven’t created a system at WEC that entices people to request a ballot that actually isn’t in keeping with the law,” he said.

Knudson, a former state lawmaker, has been on the commission since 2017 and like many office holders in Wisconsin encouraged voters to sign up for absentee ballots on the website. In August, he tweeted a link to the site along with the exhortation to “request absentee ballot now.”

Democrats dismissed Knudson’s concerns as outlandish, noting that the system has been in place unchallenged for years.

Thomsen said Trump was challenging the validity of the election only because he lost, but he had no problem with Wisconsin’s election rules in 2016 when he won by fewer than 23,000 votes.

Milwaukee County is the state’s largest, home to the city of Milwaukee, and Black people make up about 27% of the population, more than any other county. Dane County is home to the liberal capital city of Madison and the flagship University of Wisconsin campus.

The disputes at the commission had echoes of what happened in Michigan on Tuesday. Republicans on a canvassing board for the county that includes Detroit temporarily stopped certification of the vote after claiming that poll books in certain parts of the majority-Black city were out of balance. The deadlock brought claims of racism from Democrats before the board later voted unanimously to certify the results. The Republicans said they want to change their stance again, but officials said certification of the vote will stand.