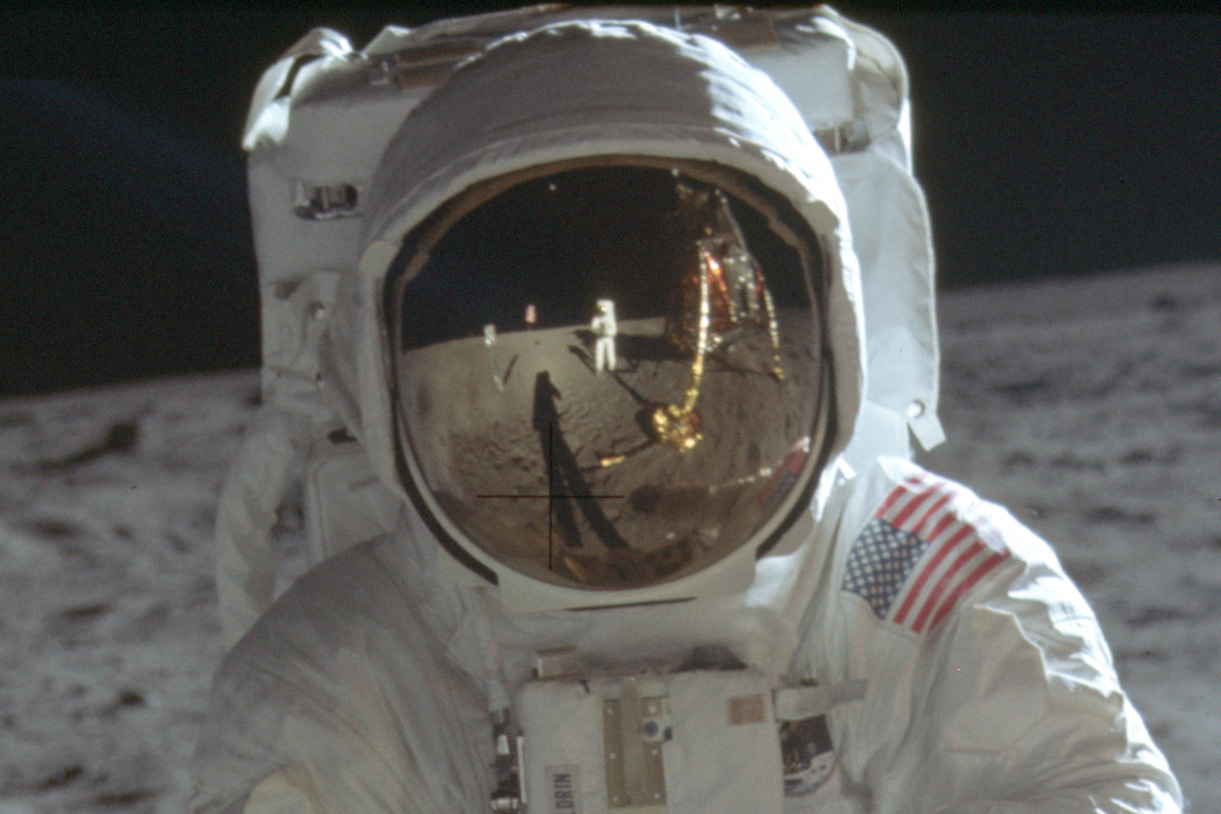 This detail of a July 20, 1969 photo made available by NASA shows astronaut Neil Armstrong reflected in the helmet visor of Buzz Aldrin on the surface of the moon. The astronauts had a camera mounted to the front of their suits, according to the Universities Space Research Association. (Neil Armstrong/NASA via AP)

WASHINGTON (AP) — Shuttered by COVID-19 infections, the Republican-led Senate is refusing to delay confirmation of President Donald Trump’s pick for the Supreme Court. They are even willing to make special arrangements so sick senators can vote for Judge Amy Coney Barrett, and Democrats appear powerless to stop them.

Sen. Ron Johnson, R-Wis., said Monday that he’ll go to the Capitol “in a moon suit” to vote if he’s still testing positive for the coronavirus, which has killed more than 209,000 Americans and infected millions.

The push to put conservative Judge Amy Coney Barrett on the high court before Nov. 3 is like nothing seen in U.S. history so close to a presidential election. Trump’s nomination of Barrett in a Rose Garden ceremony apparently became ground zero for the infections now gripping the president, his White House and its Senate allies. Three GOP senators, including Johnson, have now tested positive for the virus and several more are quarantined at home — denying Republicans a functioning majority.

Sen. Lindsey Graham, chair of the Judiciary Committee, said after talking by phone Monday with Trump that the president is “very excited” about Barrett being confirmed to the Supreme Court.

The rush to confirm Trump’s third court nominee is as much about securing a conservative court for a generation to come as it is about giving Republicans what they see as their best chances at reelection. With Trump trailing Democrat Joe Biden in polls and their own Senate majority at risk, Republicans hope a Supreme Court vote in the week before Election Day will save their jobs.

Senate Democratic leader Chuck Schumer said Monday that the Republican leadership “has truly lost touch with reality if it’s contemplating marching COVID-stricken members to the Senate to rush through a Supreme Court nominee.”

As the COVID-19 crisis envelops the Capitol, Graham announced that hearings are set to begin in one week on Barrett’s nomination. There is still no mandatory, routine, on-site testing protocol for lawmakers and staff, drawing a near revolt from staff in some offices worried about the health risks to them and the cooks, cleaners and others who keep the complex running. The Judiciary Committee is planning four days of hearings ahead of a final Senate vote by Oct. 29.

Senate Majority Leader Mitch McConnell shut the chamber to legislating through Oct. 19 over the COVID-19 infections, but said the court hearings will go on as scheduled. “This body will not cease to function,” he said Monday, noting he was pushing ahead even though his home state, Kentucky, recently recorded its highest single-day count of new COVID infections.

Over the weekend, one senator suggested they can vote from sickbeds if need be. There’s a long tradition of ill senators “being wheeled in to cast critical votes,” Sen. Tom Cotton, R-Ark., said on Fox News Channel.

Senators on the Judiciary Committee will have the option of connecting virtually, which will be needed as two of the panel’s Republicans, Sen. Mike Lee of Utah and Sen. Thom Tillis of North Carolina, are among those diagnosed with COVID-19.

Tillis’ office said Monday the senator feels “great” and has regained his sense of taste and smell after announcing late Friday he tested positive for the virus. His spokesman said so far, staff who had contact with the senator are being tested and have come back negative.

Johnson mentioned that his chief of staff was dealing with the virus. Lee’s spokesman said no one else in his office has tested positive.

Many House and Senate panels have been operating in a hybrid capacity during the pandemic.

Voting, however, is a different matter.

The Senate requires a presence from a majority on the Judiciary Committee when it comes time to vote to send the Barrett nomination to the full Senate for confirmation — meaning all 12 GOP senators on the panel would need to be in Washington, presuming Democrats on the committee all vote against Barrett. However, McConnell could have the full Senate vote to force the committee to discharge the nomination to the floor for final voting.

The full Senate floor votes on Barrett’s confirmation, expected the week of Oct. 26, provide another hurdle. McConnell has a slim margin, 53-47, meaning with three GOP senators now infected with COVID-19, and others home isolating, he would need to rely on Vice President Mike Pence to break a tie vote.

Advisers to Republicans suggest any sick senators can simply vote from upstairs in the galleries overlooking the Senate floor.

Outside groups are mobilizing alongside Democrats to protest the unusual process that’s about to unfold.

“They held a seat open for nine months. Certainly they can wait,” said Eli Zupnick, a spokesperson for Fix Our Senate, which advocates for rules changes including an end to the filibuster.

The Democratic-led House put proxy voting procedures in place early on so lawmakers don’t need to trek to Washington to work. The Senate has resisted those options, except on committees.