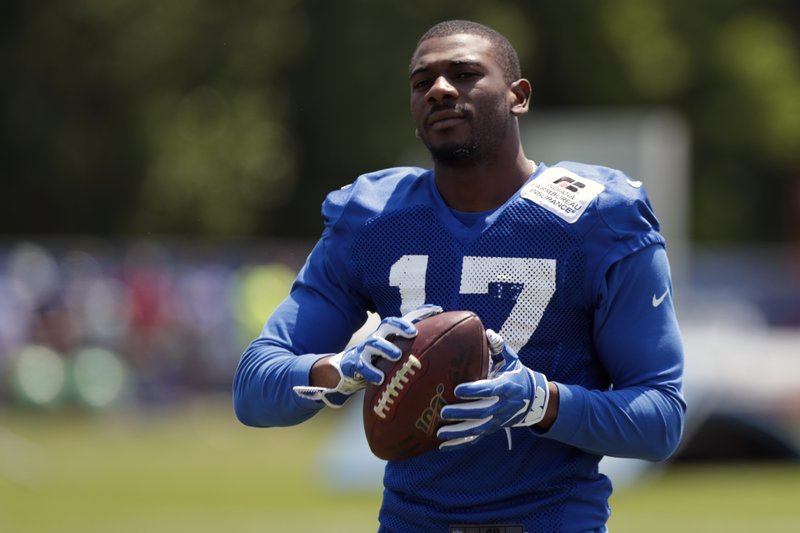 FILE - In this Thursday, July 25, 2019 file photo, Indianapolis Colts wide receiver Devin Funchess (17) runs a drill during practice at the NFL team's football training camp in Westfield, Ind. The Green Bay Packers announced the signing of Funchess on April 2. Packers wide receiver Devin Funchess is opting out of playing this season in a move he calls one of the most difficult decisions he’s ever made. Funchess’ exit leaves Green Bay without its only major offseason addition to their receiving corps. (AP Photo/Michael Conroy, File)

GREEN BAY, Wis. (AP) — Green Bay Packers wide receiver Devin Funchess is opting out of playing this season in a move he calls one of the most difficult decisions he’s ever made.

Funchess’ choice leaves Green Bay without its only major offseason addition to their receiving group, one year after Davante Adams was the only Packer to catch as many as 50 passes or accumulate as many as 500 yards receiving.

The 26-year-old Funchess announced his decision in an Instagram post. Funchess noted that some of his closest relatives “have experienced the life-threatening impact of COVID-19 first hand.” Funchess said he decided against playing this season “for their and my own safety.”

“Family is first,” Funchess wrote on his Instagram post. “Always has been. Always will be. In such unpredictable times, it’s been one of the constants on my mind as I’ve worked through one of the toughest decisions of my life.”

Funchess thanked the Packers for their understanding and said that “I look forward to getting back to work with them next season.”

The Packers announced the signing of Funchess on April 2. Funchess agreed to a one-year contract worth $2.5 million with a signing bonus of $1 million, according to Spotrac.

Funchess was attempting to come back from an injury-shortened 2019 season, as he played just one game with the Indianapolis Colts before going on injured reserve with a broken collarbone.

Green Bay now must figure out how to boost its receiving group without Funchess. The Packers didn’t take any wideouts in a draft that was regarded as particularly strong at that position, though they did add Reggie Begelton from the Canadian Football League.

The Packers also are hoping for continued development from Allen Lazard and Marquez Valdes-Scantling as well as a successful comeback from Equanimeous St. Brown, who missed the entire 2019 season with an ankle injury after catching 21 passes for 328 yards as a rookie in 2018.