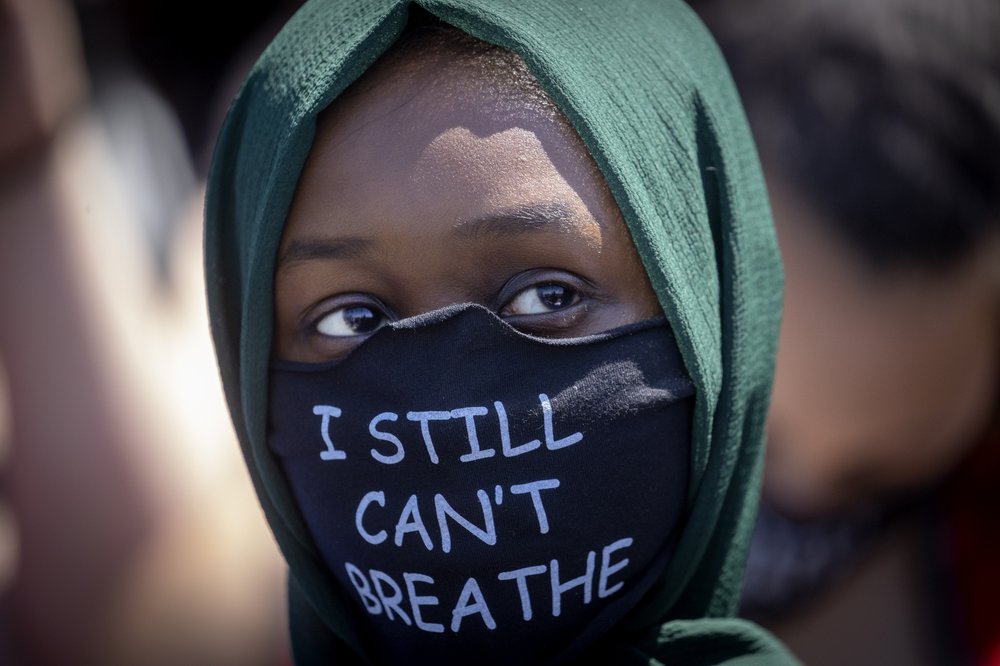 A person wears a mask Sunday, May 31, 2020, with a message at the Minneapolis corner where George Floyd was restrained by Minneapolis police. Floyd died May 25 after he was pinned at the neck by a Minneapolis police officer. (Elizabeth Flores/Star Tribune via AP)

MINNEAPOLIS (AP) — Minnesota Gov. Tim Walz said Sunday that the state’s attorney general — and not the county prosecutor — will take the lead in any prosecutions related to the death of George Floyd, a black man who was in handcuffs when a white Minneapolis police officer pressed his knee into his neck as he pleaded that he couldn’t breathe.

Walz’s unusual decision to put Attorney General Keith Ellison in the lead was a win for local civil rights activists, who say the longtime prosecutor does not have the trust of the black community needed to handle a case that has sparked widespread unrest and a national focus on racism in the criminal justice system.

Ellison, who was a vocal progressive congressman before winning state office in 2018, has the experience and community confidence for the job, Walz told reporters Sunday.

“Keith Ellison, our attorney general of Minnesota, needs to lead this case,” Walz said, adding that he made the decision after talking to the Floyd family.

Walz made the announcement shortly after Freeman released a statement saying he asked Ellison to “assist” him in the case in a “joint effort.”

“There have been recent developments in the facts of the case where the help and expertise of the Attorney General would be valuable,” Freeman said.

Derek Chauvin, 44, was charged Friday with third-degree murder and second-degree manslaughter. Three other officers who were involved have not been charged, though Freeman and Ellison have said additional charges are possible. Floyd’s death has triggered calls for police reforms, peaceful protests, as well destruction and violence in Minneapolis and cities across the country.

Ellison, who is black, said he and Freeman, who is white, will be working together. Both men have sought to set expectations in a case certain to be closely scrutinized.

“Let me also note a dose of reality, prosecuting police officers for misconduct, including homicide, murder, is very difficult,” Ellison said Sunday. “We’ll come under attack as we present this case to a jury or a fact finder. And we need to make sure that we are absolutely prepared. We intend to be absolutely prepared.”

Calling in an outside prosecutor is extremely rare, and typically only reserved for cases in which the prosecuting office has a conflict of interest.

The move followed days of criticism from activists, who view Freeman as part of the system they want reformed. He served as Hennepin County attorney in the 1990s and was elected to the post again in 2006. While leading the office, he has charged only one officer in a fatal shooting — and that was in the case of Mohamed Noor, a black officer who killed Justine Ruszczyk Damond, who was white.

It took four days for Freeman to bring charges against Chauvin, a delay criticized by activists. More than 100 people gathered outside Freeman’s home Sunday, calling for a special prosecutor, the arrests of all four officers and for Freeman’s resignation.

“We want somebody who’s on our side. Mike Freeman is not on our side,” said Sharaunta Beach, a protester. “We have to have people who are for the truth and what’s right.”

In a letter to Walz, Ellison and Freeman, the Minnesota chapter of the American Civil Liberties Union said Sunday that having Freeman investigate the police, which his office works with daily, “fosters distrust and suspicion in the community.” The letter urged that the case be transferred to Ellison’s office, where an attorney qualified to handle such cases could be appointed.

“Doing so would send a strong message to the community that a third party … will vigorously pursue justice and police accountability,” Minnesota ACLU president John Gordon wrote.

But Ellison also has a national political profile likely to draw partisan criticism. He rose to national prominence as the first Muslim elected to Congress and served as deputy chairman of the Democratic National Committee.

After he decided to run for attorney general, an ex-girlfriend accused him of abuse, saying he dragged her off a bed during an argument. An investigation commissioned by Minnesota Democrats ruled the accusation was “unsubstantiated.”

As Ellison was discussed for the Floyd case, a January 2018 tweet resurfaced, showing a picture of him holding up the book “Antifa: The Anti-Fascist Handbook.” Ellison tweeted that the book would strike fear in the heart of President Donald Trump. Antifa, short for anti-fascists, is an umbrella term for far-left-leaning militant groups that resist neo-Nazis and white supremacists at demonstrations. Federal officials have suggested the group may be involved in the wave of protests this week.

When asked about that on Sunday, Ellison said: “It means nothing. I was in a bookstore. I saw a book. And I think it’s just a complete diversion.”

It’s not clear whether Ellison’s involvement will quiet the concerns of activists.

Before news that Ellison would take the lead on the case, Nekima Levy Armstrong, a civil rights activist and former head of the Minneapolis NAACP, was among those calling for a special prosecutor, but she did not endorse Ellison for the job. Criminal justice reforms were not his priority when he was a congressman in Minneapolis’ 5th District, she said.

“There needs to be a completely independent special prosecutor,” she said.