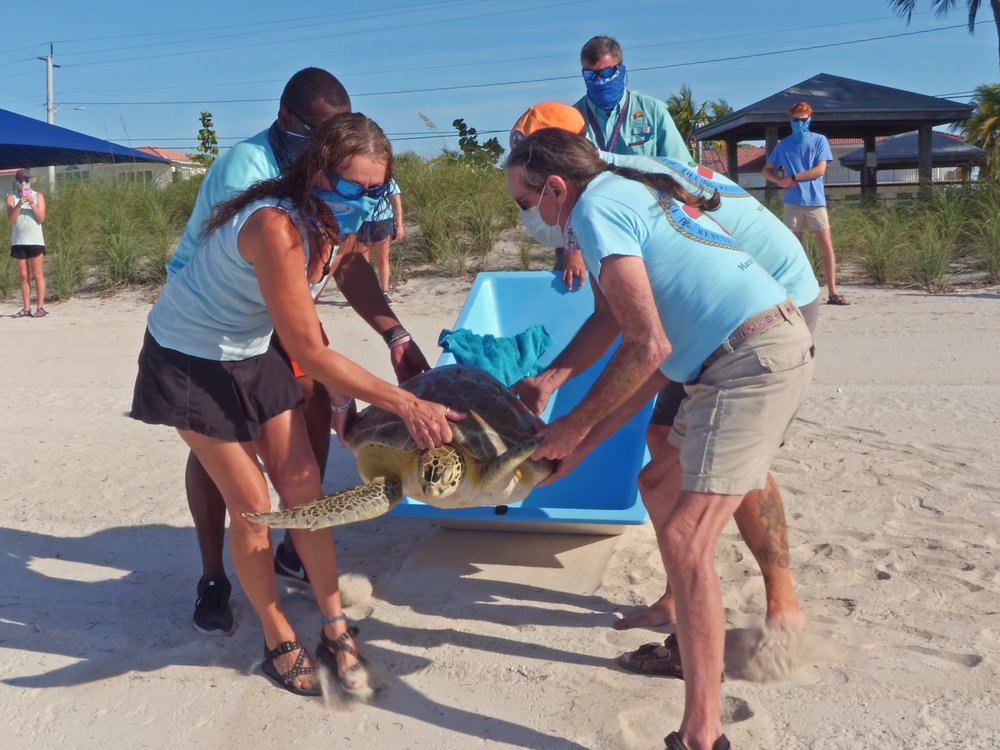 In this photo provided by the Florida Keys News Bureau, staff from the Florida Keys-based Turtle Hospital lower "Aldo Leopold," a 100-pound juvenile green sea turtle, to the beach to be released into the Atlantic Ocean, Wednesday, April 22, 2020, in Marathon, Fla. The turtle was rescued by the hospital team in late February after being discovered floating offshore, unable to dive. Wednesday's release coincided with the 50th anniversary of Earth Day. (Mariela Care/Florida Keys News Bureau via AP)

MARATHON, Fla. (AP) — The Florida Keys have been closed to visitors for a month due to the new coronavirus pandemic, but staff at the Turtle Hospital, a popular Keys environmental attraction, continue efforts to rehabilitate injured sea turtles.

Aldo Leopold, a 100-pound juvenile green sea turtle, was rescued in late February after being discovered floating offshore, unable to dive. The endangered reptile was treated at the Turtle Hospital with broad-spectrum antibiotics, fluids, vitamins and a nourishing diet of fish, squid and greens.

Rescuers named Aldo Leopold after a renowned environmentalist of the early 1900s, sometimes referred to as the father of wildlife ecology and the United States’ wilderness system.

The Turtle Hospital has been rescuing, rehabilitating and returning turtles to the wild for nearly 35 years. It even features four “turtle ambulances.”