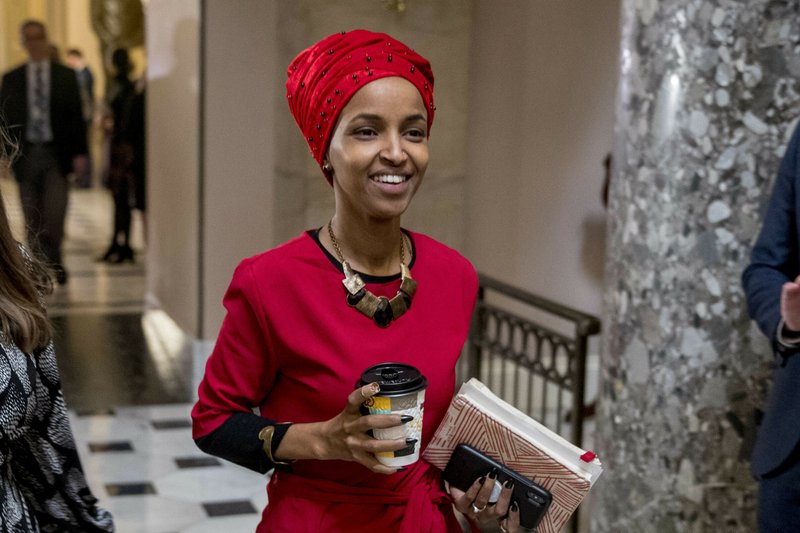 MINNEAPOLIS (AP) — Rep. Ilhan Omar’s congressional career got off to a rocky start just a year ago, with her provocative remarks on Israel and Jews stirring anger across the country and raising speculation that some other Minnesota Democrat might step forward to challenge her in 2020.

Omar was kicking off her reelection campaign Thursday night with a massive bank account and no challengers who pose a serious threat from either party. Her campaign slogan — “Send her back to Congress!” — gleefully evokes President Donald Trump’s personal attacks on her.

In an overwhelmingly Democratic district that where Omar took 78% of the vote in 2018, University of Minnesota political scientist Larry Jacobs gives her opponents no chance.

Omar, a Somali American immigrant, became a national figure in 2018 as one of the first two Muslim women elected to Congress. But her tweets last February insinuating that lawmakers support Israel because they have been bought off came under intense bipartisan criticism. She added fuel to the fire last March by suggesting that Jewish Americans have divided loyalties between the U.S. and Israel.

Trump moved quickly to try to make Omar and three other freshmen congresswomen of color — known as “The Squad” — the face of his opposition, saying they should “go back” to their counties, even though only Omar was foreign born. His supporters chanted, “Send her back!” at a rally a few days later in North Carolina. But Omar received a hero’s welcome at the airport when she returned home from Washington that week.

Omar raised more than $2.5 million through last year’s third quarter, the latest figures available, and had $1.56 million in the bank. Her fundraising was more than triple the House incumbent average, according to the Center for Responsive Politics.

Omar did not immediately respond to a request for an interview ahead of her kickoff.

Omar’s only real primary threat would have to come from a Democratic officeholder, but none has stepped forward, said Kathryn Pearson, another University of Minnesota political scientist.

One of her three little-known Democratic challengers, mediator Antone Melton-Meaux, did raise more than $200,000 in the fourth quarter, with more than $180,000 in the bank. His strong support for Israel and opposition to the Palestinian-led Boycott, Divest and Sanctions movement contrast with Omar’s positions.

“I don’t think he poses a serious threat, but the fact that he raised a chunk of money fairly quickly, it shows that while Rep. Omar is pretty safe, it doesn’t mean there aren’t some Democrats who are unhappy with her performance in Congress so far,” Pearson said.

Taking advantage of conservative dislike of Omar nationally, her likely GOP opponent, black businessman Lacy Johnson, raised nearly $478,000 by the end of the third quarter but had spent most of that.

Divisions still remain between Omar and some Jewish community leaders, though they’re not expected to make a big dent in her margin of victory.

“The injury and ill-confidence … have not been adequately addressed,” said Steve Hunegs, executive director of the Jewish Community Relations Council of Minnesota and the Dakotas, who lives in her district. “The community will pay close attention to her in the 2020 election cycle.”

While Omar’s job seems secure for now, her long-range future is less clear.

“This is the beginning of what I think will be a series of nationally prominent and contested races against Rep. Omar,” Jacobs said. “I think at some point it’s going to beat her down.”