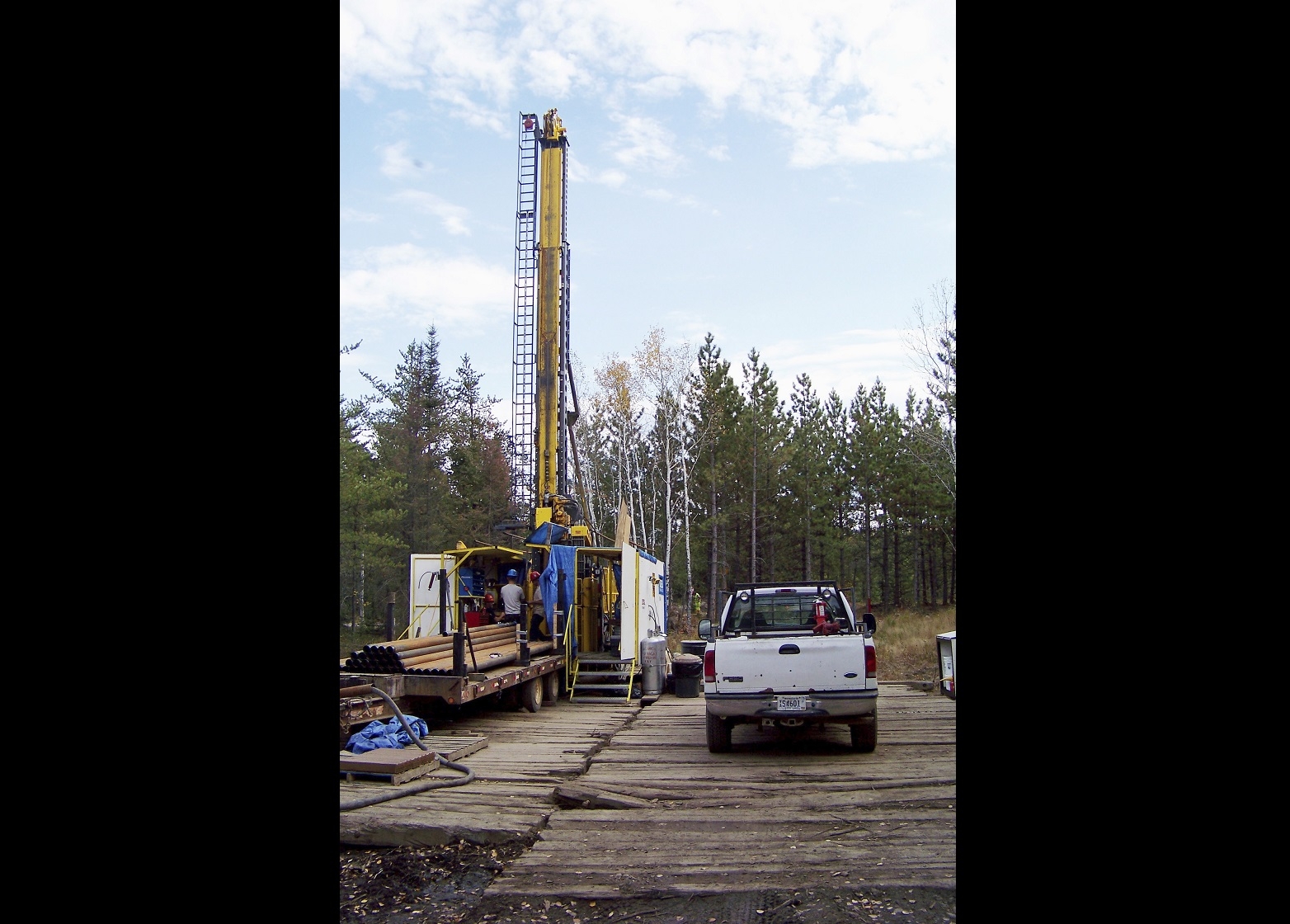 FILE - A prospecting drill rig bores into the bedrock near Ely, Minn., in search of copper, nickel and precious metals that Twin Metals Minnesota LLC, hopes to mine near the Boundary Waters Canoe Area Wilderness in northeastern Minnesota. The fight over whether to allow copper-nickel mining near the Boundary Waters Canoe Area of northeastern Minnesota is shifting to St. Paul. The U.S. Forest Service is opening a new set of public meetings on its proposal to bar minerals exploration and development on more than 234,000 acres near the pristine wilderness for up to 20 years. Date: Oct. 4, 2011 (AP Photo/Steve Karnowski, File)

ST. PAUL, Minn. (AP) — Twin Metals Minnesota formally submitted a plan to regulators Wednesday for an underground copper-nickel mine near Ely in northeastern Minnesota, a project that has drawn fierce opposition because it would sit just upstream from the Boundary Waters Canoe Area Wilderness.

Officials with Twin Metals, which is owned by Chilean mining giant Antofagasta PLC, said in interviews that the mine is designed to prevent pollution from reaching the wilderness.

Emotions have run high because of the proximity of the proposed Twin Metals mine to the Boundary Waters, the country’s most-visited federally designated wilderness area. The area spans more than 1 million acres and has more than 1,000 lakes.

President Barack Obama’s administration tried to kill Twin Metals by refusing to renew the company’s mineral rights leases, saying the threat of acid mine drainage was an unacceptable risk to the wilderness. But President Donald Trump’s administration resurrected the project by granting those leases and canceling a study that could have led to a ban on mining in the area. Opponents are challenging that in federal court, with a hearing set for Friday in Washington.

Minnesota’s existing environmental standards aren’t adequate to protect an area that pristine because they allow for some degradation of air and water quality, said Tom Landwehr, executive director of the Campaign to Save the Boundary Waters.

He also said the process doesn’t consider the effects on people who earn their livings from the wilderness area or the impact on property values.

Twin Metals says it has spent more than $450 million developing the project and added it will create about 765 full-time mining jobs and more than 1,500 spinoff jobs, plus thousands of construction work hours for union labor

The filing launches what’s expected to be a lengthy environmental review and permitting process for what would be Minnesota’s second copper-nickel mine.

Julie Padilla, Twin Metals’ chief regulatory officer, said the company hopes to complete the process in five to seven years. That could be optimistic, given Minnesota’s first planned copper-nickel mine, the PolyMet project, took well over a decade to clear those hurdles.

Twin Metals’ opponents called on Democratic Gov. Tim Walz to block even the opening of the environmental review process. Once it gets going, they said, it will be difficult for the state to stop the project.

“The decision that the state gets to make is, ‘Will this project meet state standards?’” Landwehr said. “If yes, check the box. If no, check the other box. There’s nothing in there that says, ‘OK, you know, at the end of the day I just think this is a bad project, I’m not going to approve.’”

In his former job as head of the Department of Natural Resources, Landwehr approved the environmental review and key permits for PolyMet. But that project sits in a different watershed that doesn’t flow into the Boundary Waters.

The state agency last month said it would prepare its own environmental impact statement for Twin Metals, independent of the federal review by the Interior Department’s Bureau of Land Management. Twin Metals opponents said that was a sign that the agency doesn’t trust the Trump administration to conduct a proper review.

The Minnesota Department of Natural Resources is “committed to a rigorous, transparent and neutral review of the proposal based on the best available science and applicable state laws,” said Barb Naramore, its deputy commissioner. She declined to estimate how long that would take.

The bureau issued a statement saying it would “work cooperatively” with the state to coordinate and reduce duplication in their efforts. It noted that the administration’s policy is to support copper-nickel mining in the region.

A central argument against both mines is that the vast but untapped reserves of copper, nickel and platinum group metals under northeastern Minnesota are bound up in sulfide minerals that can leach sulfuric acid and other pollutants when exposed to air and water.

Graul, the Twin Metals spokeswoman, said the company’s design would avoid acid mine drainage by preventing the exposure of sulfide-bearing rock to the elements. The company plans to bury the waste bedrock in old portions of the mine and remove nearly all sulfides from ore-bearing rock during processing.

About half of the sandy tailings remaining after processing would be returned to the mine and cemented as backfill, she said, while the rest would be compacted above ground into a “dry stack,” a hill that would reach 130 feet (40 meters) and get covered with soil and native vegetation. The stack would be impervious to precipitation, she said, and the remaining traces of sulfides would be too low to generate any acid.

The processing plant, connected by 1.25 mile (2 kilometer) tunnels to the mine itself, would produce copper, nickel-cobalt and palladium-platinum-gold-silver concentrates that would be trucked away and probably shipped via the Duluth harbor to Canada or other locations for refining, Graul said.

“It’s going to be a permanent blight on that landscape that will be leaching toxic waste into the groundwater and surface water permanently,” Landwehr said.

Padilla acknowledged that Twin Metals can’t say the project poses no risks to the Boundary Waters.

“Every development, every human endeavor engages in risk,” she said. “The regulatory process is established to put boundaries around those risks, to mitigate them, to put standards in place to allow projects to move forward.”