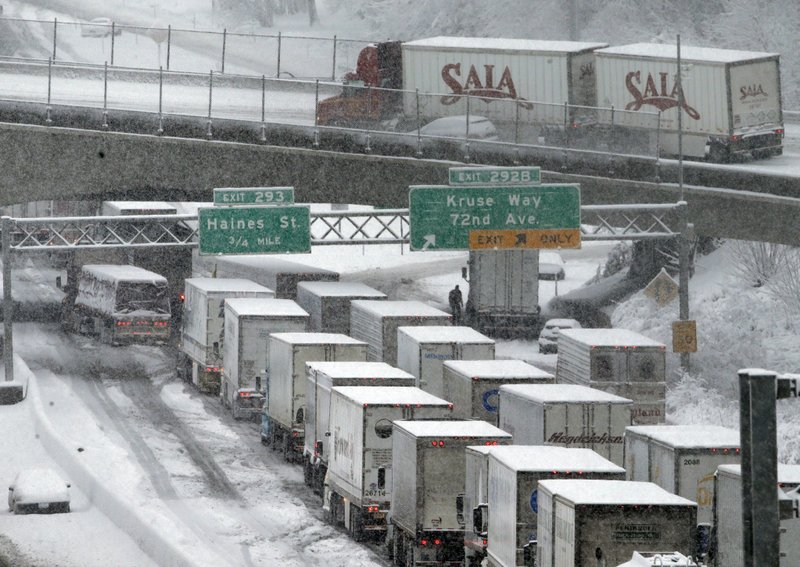 FILE - In this Jan. 11, 2017, file photo, eEarly morning traffic is at a standstill on Interstate 5 headed into town as a semi truck and cars block the off ramp to Highway 217 above in Portland, Ore. A federal watchdog says the Trump administration moved to exempt a type of super-polluting cargo truck from clean air rules without conducting a federally mandated study on how it would impact public health. The report by the Environmental Protection Agency's inspector-general says agency officials cited a “wild West” atmosphere and “fast and loose” rulemaking at the agency under then-Administrator Scott Pruitt. (AP Photo/Don Ryan, File)

WASHINGTON (AP) — The Trump administration rushed to exempt a type of super-polluting cargo truck from clean air rules without conducting a federally mandated study on how it would impact public health, the Environmental Protection Agency’s inspector-general said Thursday.

“Such actions call into question the quality of EPA rulemaking processes and leave the public and stakeholders without the information necessary to make informed comments on EPA regulatory actions,” the inspector general’s report warned.

The loophole that Pruitt was seeking would have eased pending restrictions on so-called glider trucks — a booming sector of truck-making that refits older, dirtier truck engines with new truck bodies. Emission tests found the glider trucks themselves far more damaging to people’s health than trucks with newer engines, emitting up to several hundred times the amount of some pollutants.

Politically active executives with Fitzgerald Glider Kits, the largest maker of gliders, had welcomed then-candidate Donald Trump to one of their plants during the campaign and met with Pruitt in the first months of the Trump administration.

Soon after, “”Administrator Pruitt directed that the Glider Repeal Rule be promulgated as quickly as possible,” without conducting what the watchdog office said were mandated studies on the health impacts and costs and benefits of the move, investigators concluded.

And in an email from the time, an EPA political appointee — not identified by name in the inspector general’s report — noted that even if the required health and economic analysis of the loophole was done, “”it would most likely not be as “supportive” of the proposal as OMB and others might like,” in a reference to the White House Office of Management and Budget, which reviews agencies rule proposals in a final step.

The EPA did not immediately respond to a request for comment on the inspector general’s findings. In its official response to the watchdog office, the agency said it would conduct the required health and economic study if it decides to keep moving forward on the glider-truck loophole.

Pruitt resigned in July 2018 as investigations multiplied into allegations he misused his office for personal gain.

The Office of Management and Budget refused to fully discuss with the EPA watchdog office its role in the decision to skip the required health and economic studies, investigators said.

The OMB told the investigators the information was “”particularly sensitive,”the report said. It did not elaborate.

The two Democratic lawmakers who requested the inspector-general’s review, Sen. Tom Carper of Delaware and Sen. Tom Udall of New Mexico, showed “the troubling extent to which the Trump EPA went to break the law and abuse the regulatory process in order to benefit individual political benefactors from the glider truck industry.”

The Trump administration says it is working to minimize regulatory burdens on businesses while maintaining environmental and public health protections.