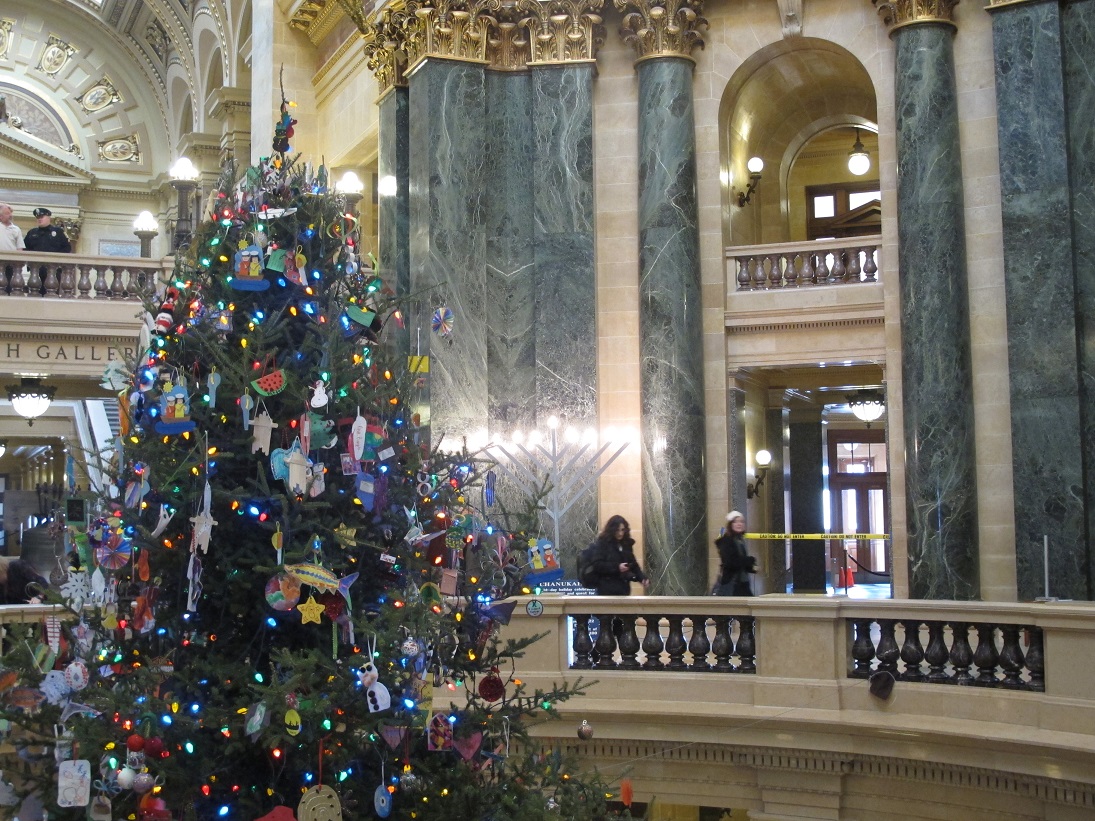 The 64-30 vote on naming the tree was a direct response to Gov. Tony Evers’ declaration last week that it would be called a “holiday tree.” Evers’ Republican predecessor Scott Walker, the son of a Baptist minister, declared the evergreen was a Christmas tree during his first term in 2011.

“It seems like the only religion we’re willing to take shots at is Christianity,” Assembly Majority Leader Jim Steineke told reporters during a news conference.

Democratic Rep. Jonathan Brostoff, who is Jewish, told Republicans if they want to help Christians they should pass gun control bills to keep them from getting killed.

“Instead of doing something substantive and helpful, we’re trying to politicize a tree,” he said.

“Bible reading has been a great encouragement and comfort for many people throughout our state’s history and has contributed to the molding of the spiritual, moral and social fiber of our citizenry,” the resolution states.

The Freedom from Religion Foundation has called the resolution “highly inappropriate.”

“Dedicating a week to the bible directly endorses Christianity over other religions, thereby telling non-Christian citizens we are second-class citizens for being the ‘wrong’ religion,” the foundation said in a statement released last week. “Imagine the uproar were the Legislature to promote ‘National Quran Week in Wisconsin.’”

The spat over Christian symbols marks the latest chapter in an acrimonious relationship between legislative Republicans and the Democratic governor. It began before Evers even took office, when the Legislature pushed through — and Walker signed — measures in a lame-duck session aimed at limiting the Democrat’s powers.

After Evers called the tree a holiday tree on Friday, Senate Majority Leader Scott Fitzgerald tweeted that the move was “PC garbage.”

The state Department of Administration has for decades placed a huge evergreen in the Capitol rotunda and decorated it with ornaments submitted by Wisconsin schoolchildren. The agency allows other groups to place displays celebrating end-of-the-year holidays in the rotunda as well, including a menorah and a Festivus pole, a nod to the fictional holiday in the “Seinfeld” television series, but the tree towers over them all.

Politicians called the tree a Christmas tree until the mid-1980s, when they started referring to it as a holiday tree to avoid accusations they were endorsing religion.

Rep. Scott Krug introduced the resolution declaring the tree a Christmas tree on Monday. Republican leaders brought it to the Assembly floor Tuesday afternoon, less than 24 hours later. Krug said that Evers is trying to exclude Christians from the holiday season.

“This resolution is about inclusion of the Christian holiday,” he said.

The Bible week resolution’s author, Rep. Paul Tittl, said he’s “not just pumping out Christianity.” He said the Bible plays a role in other religions, such as Judaism, and a host of popular expressions stem from it, including the phrases going the extra mile and pride coming before a fall.

Tittl described himself as a “born-again Christian.”

The Freedom from Religion Foundation said in a statement following the votes that legislators are misusing their secular authority to promote their own religious views and “so-called holy book” over other religions and atheism.

“The Wisconsin Assembly seems to believe it’s a time for good will to Christians and bad will to all the rest of us,” the foundation said.

Rep. Scott Krug introduced a resolution Monday declaring the tree the Wisconsin State Christmas Tree. The Republican-controlled Assembly passed the same resolution in 2007 but the proposal died in Senate.

Krug’s resolution can’t pass before Christmas. The Assembly’s last 2019 floor session is Tuesday and Krug has given co-sponsors until Friday to sign on to the proposal.