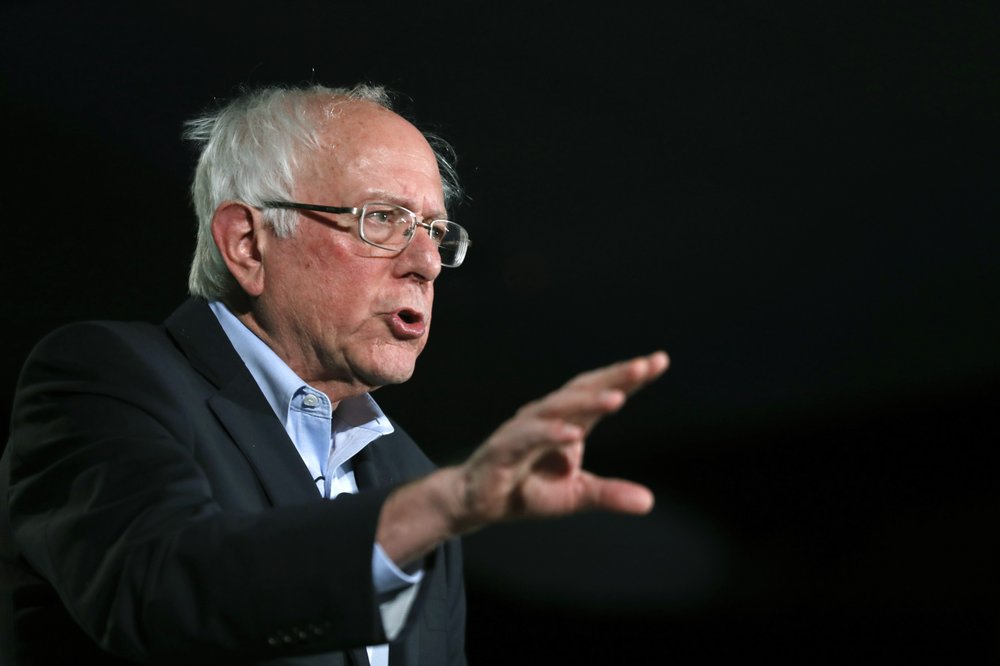 WASHINGTON (AP) — Bernie Sanders has released a major proposal to “end corporate greed and corruption” by requiring large companies to give ownership stakes to their workers. The proposal also would ensure that many of the nation’s most profitable firms pay more in federal taxes and government authorities do more to target monopolies and halt mergers that may harm consumers.

The senator has been recuperating at his Vermont home for nearly two weeks since having a heart attack while campaigning in Las Vegas but will travel to Ohio for Tuesday night’s Democratic presidential debate.

Sanders spoke to The Associated Press about his plan to overhaul an “obviously broken” and “totally absurd” corporate tax system, appointing an attorney general who would break up large monopolies and giving workers 20% of shares in their companies and 45% of the seats on their corporate boards. He called the ownership stake component “probably the more radical” piece of his proposal.

This interview has been edited for length and clarity.

Q: Sen. Elizabeth Warren has obviously been quite outspoken on breaking up large, powerful corporations, as well as making corporate governing boards more accountable to workers. How does this plan set you apart from what she’s been talking about?

A: I’ll let Sen. Warren speak for herself. But this is an issue that we have been working on for my entire political life. In fact, I can remember like it was yesterday having a meeting in city hall in Burlington, Vermont, where hundreds of people came out to talk about worker control and worker empowerment on the job. And, in fact, Vermont has been a leader — one of the leaders in the country — in doing just that.

So you’re seeing a number of companies in Vermont — which are doing very well, doing well economically and I think the morale of their employees is very, very high — where workers sit and help make the decisions for their companies. So this is an issue that I have been involved in my whole life. We’ve introduced several major pieces of legislation to help. You have a lot of companies out there, medium-size companies started by somebody who is about to retire, and, everything being equal, would like to give ownership to his or her employees but doesn’t have the tax incentives to be able to do that.

We’ve filed legislation which would do that. And, the other area is, we brought money into the state of Vermont which educates employers and workers about how they can start employer-employee owned companies. So it’s something that we’ve been working on for a long, long time. But the issue here is to empower working people so they walk into a job, they don’t feel like they’re a cog in a machine but that they have some stake in it as well. That their decisions will count and, when you do that, I think that what the record will show — and what I think you see in companies all over this country that are worker-owned — is absenteeism goes down, worker productivity goes up, people feel better about their jobs because they have some say in it.

And I think that’s enormously important. So, you add all these things together, what we’re saying to a very small number of people in the 1% is that you cannot continue to control this economy with the kind of greed and corruption that you have for so many decades, and we’re going to bring about some fundamental change.”

Q: Because you’ve been talking about these issues for years, is perhaps the best way to describe this is that you’re putting specificity behind how you would accomplish them?

A: “We’re getting into the nitty gritty and the details of what has to be done with some specificity. The broad concept of how you create a democratic society in which working people have more control over their lives is a theme that I have obviously been working on and believed throughout my entire career. But this provides some of the very specific details of how we can go forward, and it will be a major transformation of the economy in the sense of empowering working people to have control over their own lives, over their own jobs and not just be cogs in a machine, which is sadly enough too often the case.”

Q: Are there parts of this you can do without Congress since, even if you were to win the presidency, it’s hard to see this being fully approved?

A: Obviously, as is the case in many, many other issues, we will look at what option we have through executive action to incorporate some of these. But I should also tell you that, on some ideas with regard to worker control, there has, interestingly enough, been historically — I can’t tell you exactly what the case is today — but there has been conservative support and that’s a fact. I should also tell you that, right now, if you look around this country, what you’re seeing is labor militancy.

You’re seeing workers stand up, going out on strike with much more frequency than used to be the case because I think people are sick and tired of the economic and political status quo and tired of working longer hours for lower wages and seeing all of the new wealth going to the top 1%. And I think ideas like this that say to working people, “You know what, if you’re working 40 to 50 hours a week, you should have a say in your job.” If you’re a consumer out there, you should have more than two or three companies in a given sector controlling what goes, and the idea that major corporations aren’t paying a nickel in federal income tax, I think all of these ideas will resonate with Americans.

Q: So, you’re saying you think there will be bipartisan support?

A: I think it is very hard, very hard for Donald Trump or anybody else, to make the case to the American people that a company like Amazon — owned by the wealthiest person in America, made $10 billion in profit last year — didn’t pay a nickel in federal income tax. Somebody wants to make that case, you go ahead. I don’t think anybody in America will accept it. It has everything to do, simply, with the power of the billionaire class, the power of the corporate elite and a very corrupt political system.

Q: Going into the debate after your health scare, do you have the stamina to be on the stage for three hours on Tuesday?

A: (Laughs) Well, I certainly hope so. I’m feeling great. I’m doing a lot of walking and very much look forward to the debate.

Q: Will we see you talking about the ideas in your corporate governance plan during the debate?

A: Yes. To the degree that you can get them across in 45 seconds, you will.