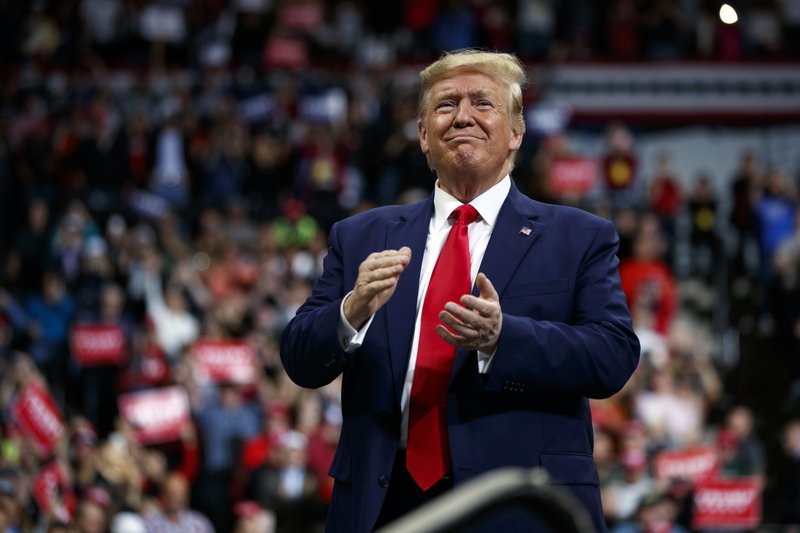 WASHINGTON (AP) — President Donald Trump on Thursday minimized the ongoing threat of the Islamic State and overstated his economic success, declaring inaccurately that China would have overtaken the U.S. as the world’s largest economy if he wasn’t president.

Here’s a look at his claims at a Minneapolis rally, his first since Democrats opened an impeachment inquiry of Trump’s actions as president:

TRUMP: “If our opponent had won that election, you know what would have happened? Right now, China would be the No. 1 economy anywhere in the world. And right now, I can tell you, they’re not even close.”

THE FACTS: No matter who got elected in 2016 — Trump or Democrat Hillary Clinton — China’s economy could not have caught up to America’s.

Even if the U.S. economy had not grown at all since 2016, China’s gross domestic product — the broadest measure of economic output — would have had to have surged a fantastical 79% in three years to pull even with America’s. That comes to growth of more than 21% a year — something even China’s super-charged economy has never approached.

The Chinese economy continues to slowly narrow the gap because every year it grows much faster than America’s. In 2019, for example, the International Monetary Fund expects Chinese GDP to increase 6.2%, more than double the 2.6% growth it expects for the United States. But it’s got a long way to go to surpass the U.S.

TRUMP: “We have totally defeated the ISIS caliphate.”

THE FACTS: His claim of a 100% defeat is misleading as the Islamic State still poses a threat.

IS was defeated in Iraq in 2017, then lost the last of its land holdings in Syria in March, marking the end of the extremists’ self-declared caliphate.

Still, extremist sleeper cells have continued to launch attacks in Iraq and Syria and are believed to be responsible for targeted killings against local officials and members of the Syrian Democratic Forces.

IS controlled large swaths of northern and eastern Syria, where they declared a caliphate in 2014 along with large parts of neighboring Iraq.

U.N. experts warned in August that IS leaders are aiming to consolidate and create conditions for an “eventual resurgence in its Iraqi and Syrian heartlands.”

TRUMP, explaining his decision to withdraw U.S. support for Kurdish fighters in Syria, who are holding thousands of foreign fighters in the campaign against IS: “Most of them came from Europe.”

THE FACTS: The foreign fighters captured are not mostly from Europe, which Trump has argued could easily reclaim them.

Of the more than 12,000 IS fighters in custody in Kurdish areas, only 2,500 are from outside the region of the conflict, some from Europe, some from other parts of the world. But the bulk of captured fighters — about 10,000 — are natives of Syria or Iraq.

Trump has said it will now be up to countries in the region to decide what to do with captured fighters.