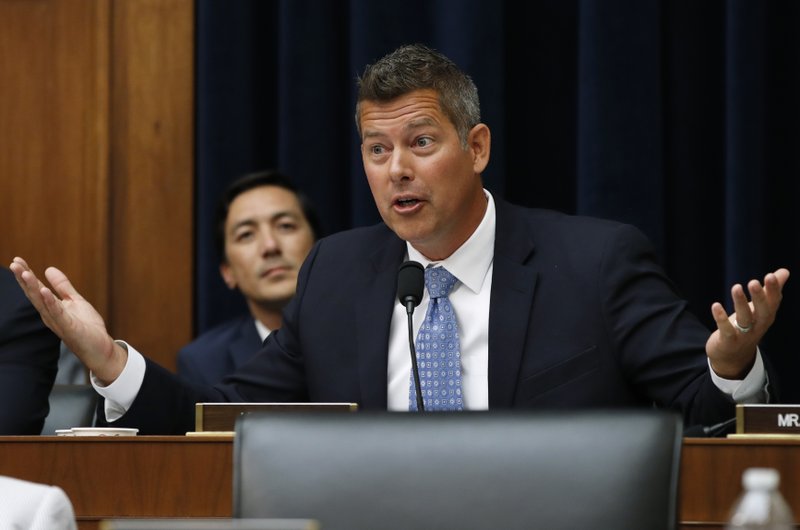 FILE - In this July 18, 2018, file photo, Rep. Sean Duffy, R-Wisc., asks a question of Federal Reserve Board Chair Jerome Powell during a House Committee on Financial Services hearing on Capitol Hill in Washington. Duffy, who represents northern Wisconsin in Congress, is resigning in September 2019. Duffy posted on his Facebook page Monday that he was resigning on Sept. 23 to spend more time with his family. (AP Photo/Jacquelyn Martin, File)

MADISON, Wis. (AP) — Wisconsin Gov. Tony Evers plans to change the date of the special election for an open congressional seat because he was told by the U.S. Department of Justice that the dates he set last week violated federal law.

The original dates set by Evers, a Democrat, avoided potentially boosting GOP turnout in a state Supreme Court election set for April 7. The congressional seat is in a heavily Republican district that President Trump won by 20 points in 2016.

Having the special congressional election in the strong Republican district on the same day as the Supreme Court election could be a boost to incumbent Justice Dan Kelly, part of the 5-2 conservative majority who is running for a full 10-year term next year.

That conflict created an “impossible situation,” Baldauff said. Evers is in consultation with both the state and federal departments of justice to set the new special election dates, she said.

“We want to announce something as soon as we can,” she said. “We just want to make sure there won’t be any additional confusion for municipal workers, the voters and the candidates.”

Evers is considering two different scenarios, both of which would move the general election to April or May.

Under the other scenario, the primary would be Feb. 18, which is the date of the primary for the state Supreme Court race. The general election for the special congressional election would then be May 5.

Evers can’t align the special election with the same primary and general election dates as the regularly scheduled state spring elections because of timelines in federal law for certifying the results and having ballots available, Baldauff said.

The Wisconsin Legislature in 2011 changed the date of the state’s primary for fall elections from September to August to be in compliance with the 2009 federal law giving military and overseas voters more time to vote. But the Legislature did not change the law relative to special elections, creating the conflict for this race. This is the first time the issue has come up in Wisconsin since the federal law changed in 2009.

On Friday, the state Assembly Speaker Robin Vos asked Evers to change the election dates because the Dec. 30 primary would fall on the final day of Hanukkah. Baldauff said the decision to change the dates had nothing to do with the Vos request.

Three Republicans have announced their candidacies in the heavily GOP district that covers central, northern and northwestern Wisconsin. They are Tom Tiffany, a state senator from Minocqua, Jason Church, an Army veteran who lost both his legs in Afghanistan and worked as an aide to U.S. Sen. Ron Johnson, and Michael Opela Sr., who lives on a hobby farm in Edgar.

Church said in a statement that “Evers’ political motivations have resulted in chaos and uncertainty for voters.”

Tiffany said in a statement that “it is imperative that all military and overseas voters have the opportunity to vote” and he’s prepared to win no matter the election date. Opela did not immediately respond to a request for comment.