What we know (and don’t) about Juul, teen vaping and illness 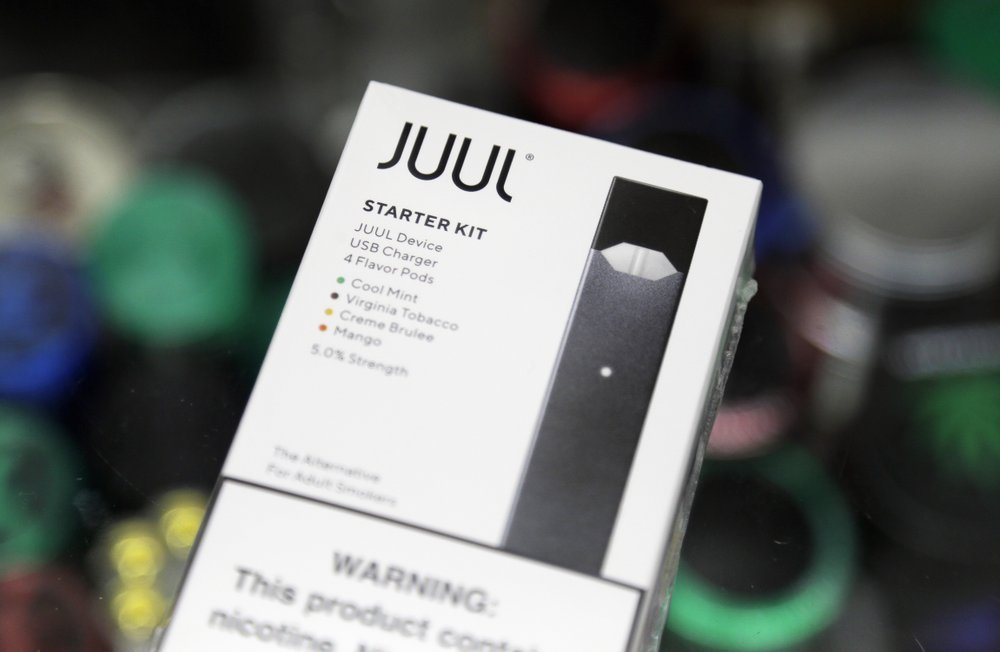 FILE - This Dec. 20, 2018, file photo shows a Juul electronic cigarette starter kit at a smoke shop in New York. Juul is the largest U.S. seller of electronic cigarettes, controlling about 70% of the market. The San Francisco-based company rose to the top through viral marketing that promoted high-nicotine pods with dessert and fruit flavors. (AP Photo/Seth Wenig)

NEW YORK (AP) — An outbreak of vaping illnesses. A surge in teens using electronic cigarettes. They’re often spoken of in the same urgent breath, but it’s not clear how — or even if — they are connected.

Following a shakeup at Juul Labs Inc., the largest U.S. seller of e-cigarettes, here are some questions and answers about vaping:

WHAT HAPPENED WITH JUUL?

The San Francisco-based company that controls about 70% of the market announced Wednesday that it will no longer run TV, print or digital advertisements for its e-cigarettes.

Juul, which rose to the top through viral marketing that promoted nicotine pods with dessert and fruit flavors, also said it’s replacing its CEO and promised not to lobby against a proposed U.S. ban on flavors.

Some health advocates were not impressed.

“No one should mistake the company’s suspension of its marketing efforts as anything other than a naked attempt to ease public pressure and curry favor with elected officials,” American Heart Association chief executive Nancy Brown said in a statement.

WHY ARE OFFICIALS CONCERNED ABOUT JUUL?

Health officials say Juul has triggered an explosion in teen vaping in recent years. Recent surveys found 1 in 4 high school seniors reported vaping nicotine in the month before they were asked about it.

Health officials have said vaping may be a less-deadly alternative for adult smokers who are trying to quit cigarettes, but they’re worried about kids using the devices. Nicotine is harmful to developing brains, and surveys suggest that as many as 1 in 8 high school seniors vape nicotine daily.

The youth vaping boom has led to backlash. This month, President Donald Trump said the government will act to ban thousands of flavors used in electronic cigarettes because they appeal to underage users.

On Tuesday, the governor of Massachusetts ordered a four-month ban on the sale of vaping products. Republican Gov. Charlie Baker said he was alarmed not only by the popularity of vaping but also a rash of vaping-related breathing illnesses that have caused deaths.

ARE THE RECENT VAPING ILLNESSES RELATED?

Over the summer, health officials in a few states began noticing reports of people developing severe breathing illnesses, with the lungs apparently reacting to a caustic substance. The only common factor in the illnesses was that the patients had all recently vaped.

More than 500 people are suspected or confirmed to have gotten the illness and at least 10 have died.

We don’t know. No single vaping product or ingredient has been linked to them, and health officials haven’t released a national breakdown of what product each sick person vaped.

Among 53 of the earliest cases in Illinois and Wisconsin, the vast majority of patients said they had vaped products containing THC, the ingredient in marijuana that produces a high. Nearly one-fifth said they had only vaped nicotine products.

The investigation does seem to be largely focused on products containing THC, with some attention on ingredients added to marijuana oil.

Anecdotally, a common thread has been products purchased on the street, not at dispensaries in states with legal pot sales. There is one puzzling outlier: A death in Oregon linked to a product bought at a legal cannabis retailer.

Another consideration: Juul and other brands of nicotine e-cigarettes have been around for years, but the illnesses surfaced only recently.

WHAT DO OFFICIALS THINK ABOUT VAPING OVERALL?

They’re divided. Some say the devices seem to have helped accelerate a decline in cigarette smoking, which would make them an important weapon against the nation’s leading preventable cause of death.

But officials at the Centers for Disease Control and Prevention have for years worried that what’s in vaping products was not well understood. They also feared e-cigarettes would become a new way of introducing kids to nicotine and potentially hooking them on tobacco products in the future.

For now, doctors and health officials are suggesting people stay away from all vaping products until an investigation establishes what’s causing the illnesses.