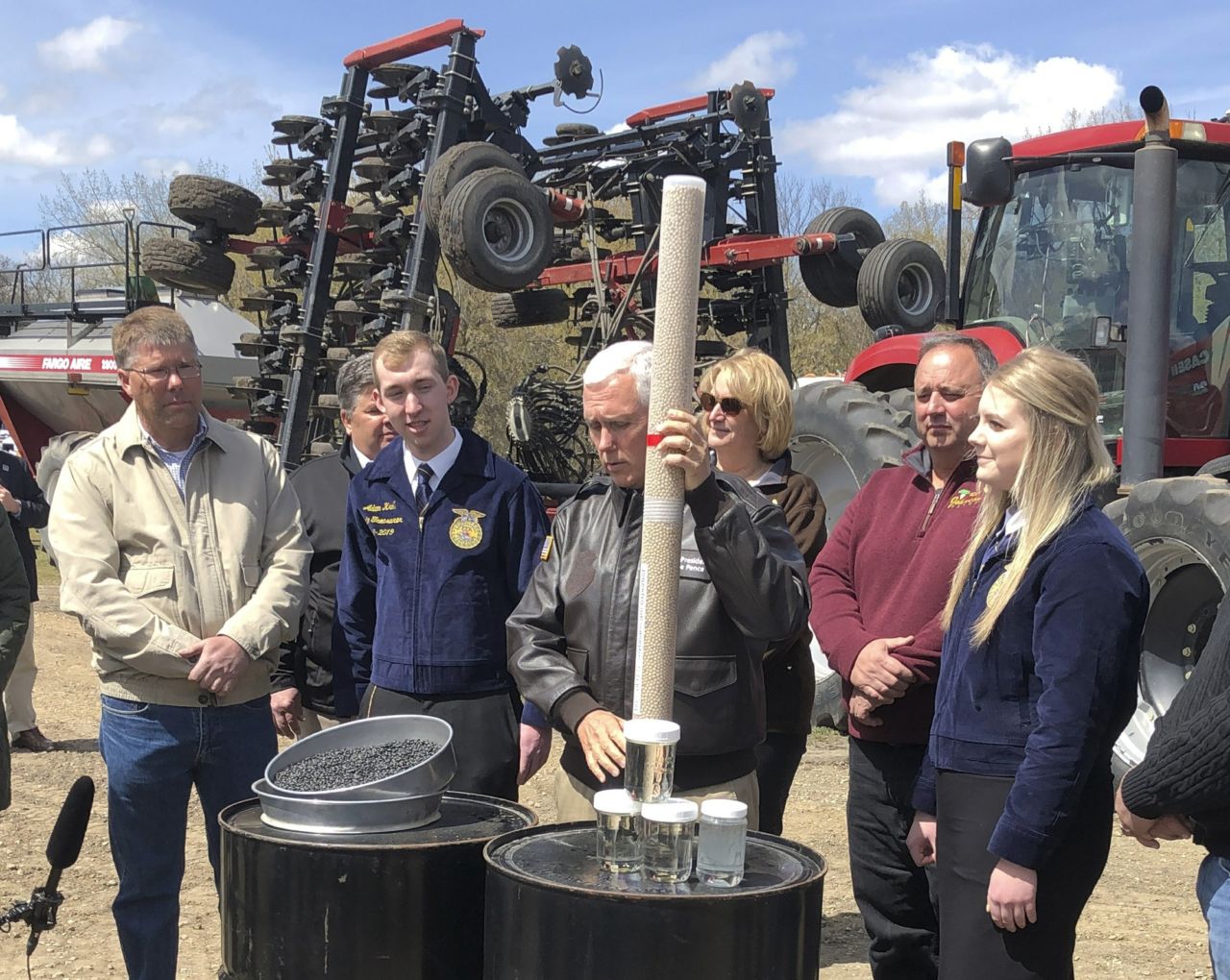 Vice President Mike Pence, center, holds a tube of soy beans as he tours the R & J Johnson Farms in Glyndon, Minn., Thursday, May 9, 2019, to talk about the Trump administration's trade agreement with Canada and Mexico. Famers who visited with Pence emphasized the importance of selling soy beans as Minnesota ranks third among all states in soy bean production. (AP Photo/Dave Kolpack)

GLYNDON, Minn. (AP) — Vice President Mike Pence said Thursday the Trump administration is working “literally, hour by hour” to reach a trade agreement with China, as the deadline loomed on a U.S. threat to raise tariffs on Chinese imports.

Flanked by farmers and ranchers invited to a northwestern Minnesota farm to talk about the new North American trade agreement, Pence told reporters he was hopeful a deal with China could be reached before 12:01 a.m. Friday. It wasn’t.

He also said the U.S. is going to “continue to stand firm” to reset an unbalanced trading relationship.

The U.S. followed through and raised tariffs on $200 billion in Chinese imports from 10 to 25%. Before that happened Pence said “you can very confident” that the administration is going to “look for ways” to provide additional support to farmers affected by the trade dispute. He was not specific.

Farmers told Pence how important China was for exporting goods, to which Pence asked, “the biggest export market, anybody?” as if he didn’t know. They replied, “China,” and Pence said, “OK.”

Pence changed the subject from China to “the good news,” referring to the U.S.-Mexico-Canada Agreement, or USMCA. He spent most of his one-on-one time with the friendly audience gathered at R&J Johnson Farms promoting the deal and telling producers that Congress needs to act on it.

Pence called on Minnesota Democratic Rep. Collin Peterson, chairman of the House Agriculture Committee, to help persuade Speaker Nancy Pelosi to put the USMCA to a vote. The vice president said it’s sure to pass.

Peterson put out a statement before Pence’s comments stating he is the most senior Democrat who supports USMCA. A spokeswoman for Peterson did not immediately return a phone message seeking reaction on Pence’s plea for assistance.

“Farmers need certainty and getting USMCA done is one part of that,” Peterson said.

Jake Hein, 29, one of the attendees at Thursday’s event, said farming has been in his family for five generations, tracing back to the original farm in Norway. His wife, Christina, 28, is expecting in October and he’s hoping by that time he won’t have to worry about selling crops from his Audubon, Minnesota farm.

“I’m thankful the vice president came here to talk about something that is just extremely important to us in rural Minnesota,” Jake Hein told The Associated Press after talking with Pence. “If we can get the USMCA ratified it would really go a long way toward making our farms profitable again.”

One subject that didn’t come up Thursday was Trump’s tariffs on steel and aluminum, which Minnesota Farm Bureau President Kevin Papp calls a “tax at the border” that is “killing us in agriculture.” Pence was scheduled later Thursday to give a speech to workers at Gerdau Ameristeel, one of the mills that Trump’s tariffs are meant to help.

Robert Kudrle, an international trade specialist at the University of Minnesota, said it’s “tricky business” for Pence to be selling a package that includes a 25 percent tariff on steel and a 10 percent tariff on aluminum. The Mexicans and Canadians don’t like it, nor do most Republicans in Congress, Kudrle said.

“The fact that it is still there is something (Pence) can talk to the steelworkers about,” said Kudrle, who added that some of his audiences have no clue about tariffs because they were “kind of a thing of the past until a few years ago.”

U.S. Rep. Pete Stauber, a Republican whose district includes northeast Minnesota’s Iron Range, said the steel tariffs have stopped countries like China from dumping steel into the market, noting that U.S. shipments went up 5 percent last year while steel imports dropped by 4 million tons. At the same time, he said the U.S.-Mexico-Canada Agreement, or USMCA, will allow farmers to export more products to Canada.

“President Trump and his administration is not trying to pit the farmers against the steel workers or the manufacturers against the steel workers at all,” Stauber said. “Our Minnesota farmers not only feed our Minnesotans and this country, they also feed the world and we want to make sure that we give them the opportunity to move their products across this globe in a free and fair way.”