Battling over voting rights, Dems, GOP have 2020 in sight 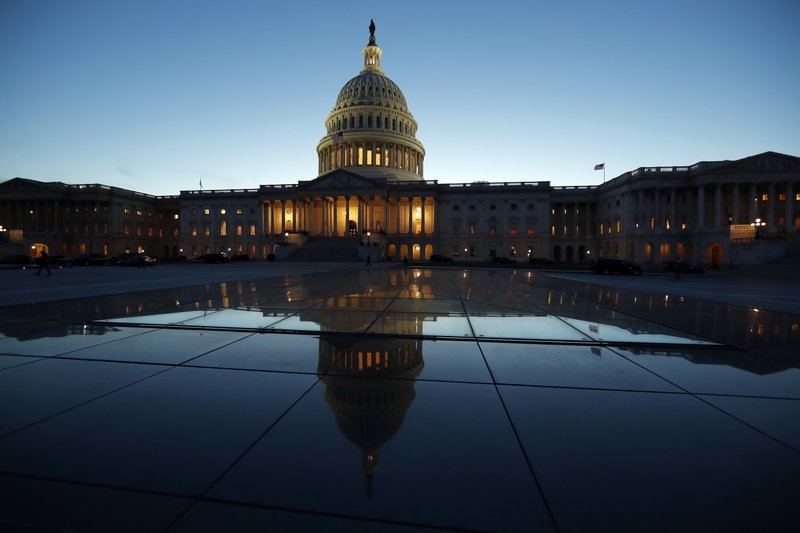 WASHINGTON (AP) — Every election year, there’s heated talk about voter access and suppression. This year congressional Democrats are hoping to make it a top-tier political fight.

The Democrats are calling for new legislation and increasingly pressuring Republicans in both the House and Senate, aiming to highlight enduring restrictions that prevent some voters from casting ballots — and hoping to also energize key parts of the party’s base of supporters.

In the House, Democrats flexing their new majority muscles chose to make their first major piece of legislation — significantly numbered H.R. 1 — a bill that would make it easier to register to vote. Senate Democrats, who remain in the minority, also intend to make voting rights a top priority.

“We’re going to go on offense on it,” Senate Democratic leader Chuck Schumer said in an interview. “We’re going to make it an issue in the 2020 campaigns. We Democrats have to fight in this more aggressive, stronger, focused way.”

Voting access was a strong motivator for Democratic voters in the 2018 campaign, including in Georgia, where Democrat Stacey Abrams narrowly lost the governor’s race to Republican Brian Kemp. Abrams accused Kemp, as secretary of state, of improperly purging voters from the rolls and limiting access to polling places in rural parts of the state.

Kemp said he was following state law to guard against voter fraud after an AP analysis found 53,000 applications of mostly black voters were held in pending status just before the midterm election. National Republican leaders also insist the issue is voter fraud, not suppression.

Democratic leaders see the Georgia results as evidence that voters are concerned and motivated to vote by the issue. Hoping to keep the momentum, they’re eager to show their base, particularly the African-Americans they’ll need to win in next year’s voting, that they’re committed to pushing hard for legislation.

Schumer said he’ll be targeting three specific areas: federal oversight of election laws in states with a record of voter disenfranchisement; automatic voter registration and statehood for the District of Columbia.

His comments coincide with the 54th anniversary of Bloody Sunday, when peaceful protesters were tear-gassed and beaten by Alabama state troopers as they attempted to march across the Edmund Pettus Bridge in Selma on March 7, 1965. It was a major incident of the Civil Rights movement, and led to the passage of the federal Voting Rights Act of 1965. That law in turn led to millions of black Americans gaining access to the vote — increasing their political power with the election of more black local, state and federal leaders.

Schumer said he would sign on to the current Voting Rights Advancement Act introduced by Sen. Patrick Leahy. The Vermont Democrat’s bill would require new election laws in some states to be approved by the Justice Department. The Supreme Court struck down a federal preclearance requirement in 2013, saying it unfairly punished Southern states. Schumer said Democrats would also introduce automatic voter registration legislation in the Senate.

The efforts appear to have little chance of moving through the Republican-led Senate. Republicans have typically cast such efforts as an attempt to tilt elections in Democrats’ favor and expressed concern about voter fraud. Senate Majority Leader Mitch McConnell said Wednesday that Democrats are “intent on fixing our elections, even though they aren’t broken.”

“This new House Democrat majority’s top priority is apparently assigning themselves an unprecedented level of control over how they get elected to Washington D.C.,” McConnell said.

Unsurprisingly, that’s not how the Democrats see it.

Schumer contends that the Republicans “don’t like it when poor people, people of color and students vote, and so they make it harder for them to vote. … That is not what our democracy is all about.”

The Democratic leader acknowledges the challenge for his party to actually pass their voting-rights bills into low. But he says his efforts are part of a long game, focusing on where leverage exists, such as in must-pass legislation like the federal budget.

Meanwhile, Democrats are also busy working to document and investigate allegations of voter suppression in the 2018 midterms. A House committee on Wednesday sent letters to Georgia’s governor and secretary of state asking for information on “recent reports of serious problems with voter registration, voter access and other matters affecting the ability of people in Georgia to exercise their right to vote.”