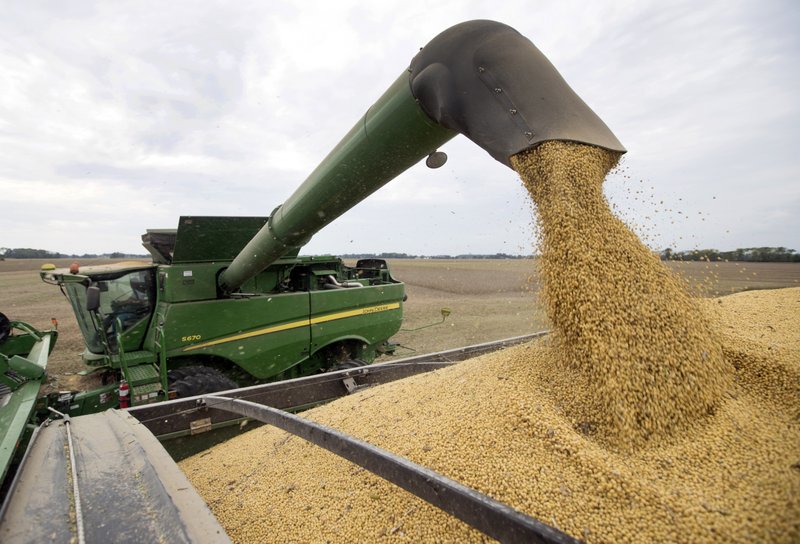 WICHITA, Kan. (AP) — The nation’s farmers are struggling to pay back loans after years of low crop prices and a backlash from foreign buyers over President Donald Trump’s tariffs, with a key government program showing the highest default rate in at least nine years.

Many agricultural loans come due around Jan. 1, in part to give producers enough time to sell crops and livestock and to give them more flexibility in timing interest payments for tax filing purposes.

“It is beginning to become a serious situation nationwide at least in the grain crops — those that produce corn, soybeans, wheat,” said Allen Featherstone, head of the Department of Agricultural Economics at Kansas State University.

While the federal government shutdown delayed reporting, January figures show an overall rise in delinquencies for those producers with direct loans from the Agriculture Department’s Farm Service Agency.

Nationwide, 19.4 percent of FSA direct loans were delinquent in January, compared to 16.5 percent for the same month a year ago, said David Schemm, executive director of the Farm Service Agency in Kansas. During the past nine years, the agency’s January delinquency rate hit a high of 18.8 percent in 2011 and fell to a low of 16.1 percent when crop prices were significantly better in 2015.

While those FSA direct loan delinquencies are high, the agency is a lender of last resort for riskier agricultural borrowers who don’t qualify for commercial loans. Its delinquency rates typically drop in subsequent months as more farmers pay off overdue notes and refinance debt.

With today’s low crop prices, it takes high yields to mitigate some of the losses and even a normal harvest or a crop failure could devastate a farm’s bottom line. The high delinquency rates are caused by back-to-back years of low prices, with those producers who are in more financial trouble being ones who also had low yields, Featherstone said.

The situation now is not as bad as the farm credit crisis of the 1980s — a time of high interest rates and falling land prices that was marked by widespread farm foreclosures. At the height of that crisis in 1987, U.S. farmers filed 5,788 Chapter 12 bankruptcies. There were 498 in 2018.

Some fears are also surfacing in reports such as one this month from the Federal Reserve Bank of Minneapolis, which said the outlook is pessimistic for the start of this year with respondents predicting a further decline in farm income. About 36 percent of farm lenders who responded said they had a lower rate of loan repayment from a year earlier.

Tom Giessel said he borrowed some operating money from his local bank last year and paid it off. Giessel, who raises wheat and corn on some 2,500 acres in western Kansas, said the only thing that kept the farm economy afloat in his area was that people had pretty good fall crop yields. Giessel, 66, said he had once gotten to the point where he didn’t have to borrow his working capital and had a relatively new set of equipment, but he has had to borrow money for the last three years just to put in a crop.

“A lot of people are in denial about what is going on, but reality is going to set in or has set in already,” Giessel said.

The February survey of rural bankers in parts of 10 Plains and Western states showed that nearly two-thirds of banks in the region raised loan collateral requirements on fears of a weakening farm income. The Rural Mainstreet survey showed nearly one-third of banks reported they rejected more farm loan applications for that reason.

Grain prices are down because farmers around the world have had above-average production for several years. But some nations’ economies are not doing as well, decreasing demand for those crops, Featherstone said. Grain prices peaked in 2012 and prices have roughly fallen 36 percent since then for soybeans, 50 percent for corn and 48 percent for wheat.

When Trump imposed tariffs, China retaliated by stopping soybean purchases, closing the biggest U.S. market. While trade negotiations with China continue, many farmers fear it will take years for markets to recover — as it did when President Jimmy Carter imposed a grain embargo on the then-Soviet Union in 1980.

“The tariffs Trump is messing around with are not helpful at all — I don’t think anybody knows the true effect,” said Steve Morris, who farms near Hugoton in southwest Kansas.

Morris, who has been cutting back acreage in an effort to avoid borrowing money, said drought conditions last year in his area devastated his wheat yields. Trump has offered farmers subsidies to compensate for the tariffs but they are based on harvested bushels. Morris, 73, received a subsidy payment last year for his wheat crop of only $268.

Many farmers are now scrambling to borrow money as spring planting nears.

Matt Ubel, a 36-year-old Kansas farmer who bought out his parents’ farm in December 2016, said they have not been delinquent on their FSA loans, but acknowledged the payment was “a challenge to make last year.”

“We have had trouble for several years getting operating loans,” he said. “This year doesn’t look any better.”

A key factor in whether farmers receive loans is the value of their land.

Farmland values in parts of the Midwest and Plains regions largely held steady at the end of last year, according to the Federal Reserve Bank of Kansas City. But slightly higher interest rates and an uptick in the pace of farmland sales in states with higher concentrations of crop production could drive those land values down, it said.

“The big key in terms of whether or not we enter a financial crisis would be what would happen to land values,” Featherstone said. “So far land values have gradually declined, so that has kind of prevented us from maybe entering a situation like we did in the 1980s.”