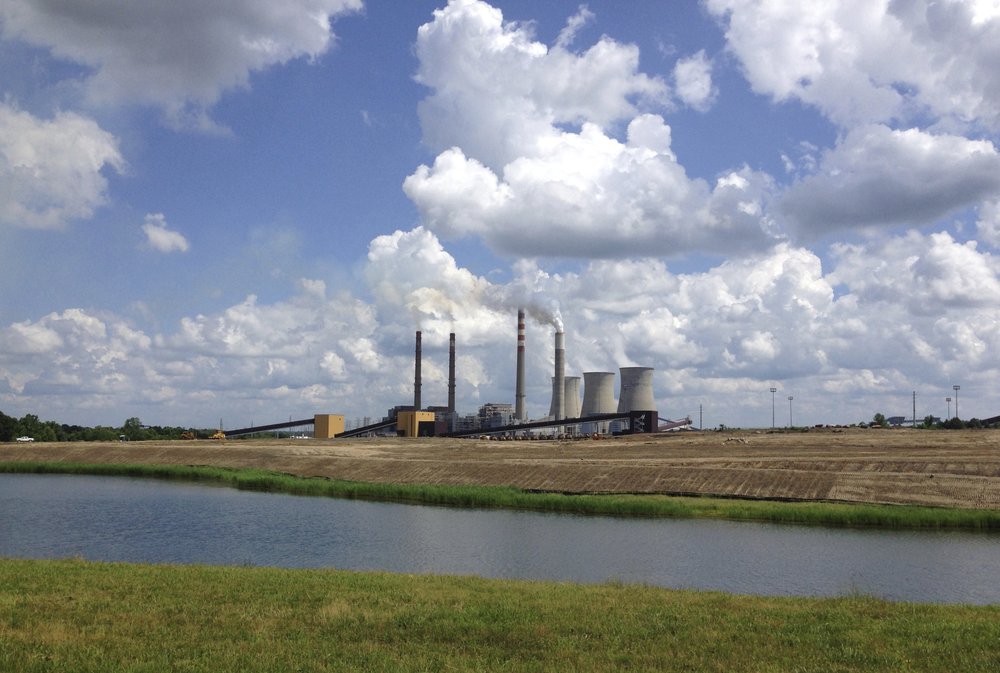 FILE - This June 3, 2014, file photo shows a panoramic view of the Paradise Fossil Plant in Drakesboro Ky. President Donald Trump's vow to save the coal industry will be tested this week when a utility board he appoints weighs whether to close a coal-fired power plant in Kentucky whose suppliers include a mine owned by one of his campaign donors. An environmental assessment by the Tennessee Valley Authority recommends shuttering the remaining coal-fired unit at the Paradise Fossil Plant in Muhlenberg County. The board could vote on Thursday, Feb. 14, 2019. (AP Photo/Dylan Lovan, File)

FRANKFORT, Ky. (AP) — President Donald Trump’s support for the coal industry — and for a particular power plant — will face a test this week when a utility board he appoints considers whether to close a coal-fired Kentucky plant whose suppliers include a mine owned by one of his campaign donors.

An environmental assessment by the Tennessee Valley Authority recommends shuttering the remaining coal-fired unit at the Paradise Fossil Plant along the Green River in Muhlenberg County, an area that was once the country’s top coal producer and was immortalized in a song by singer John Prine in 1971.

Federal data show that as recently as 2017 the plant received much of its coal from a mine owned by a subsidiary of Murray Energy Corporation, whose CEO Robert E. Murray has donated to Trump’s campaign. Murray Energy Corporation spokesman Jason D. Witt declined to comment on the connection but said company employees attended a meeting last week “at their own volition” urging the TVA to keep the plant open.

“They are extremely concerned about the damages that the proposed closure of Unit 3 will have on their families, as well as their standard of living, and the quality of life in the entire western Kentucky region,” Witt said.

Trump has often expressed doubt about climate change and said he does not believe action is needed to reduce greenhouse gas emissions that contribute to global warming. His administration has focused on U.S. “energy dominance” and increased production of oil, gas and coal on federal and private land.

Trump posted a message Monday on his Twitter account declaring “coal is an important part of our electricity generation mix” and urging the TVA to “give serious consideration to all factors before voting to close viable power plants, like Paradise #3 in Kentucky!” The tweet was a welcome surprise in Muhlenberg County, where Trump won nearly 72 percent of the vote in the 2016 presidential election.

“Wow, he actually thought about us, little old Muhlenberg County here in a place called Paradise,” said Sandy Shemwell, the former owner of a restaurant a few miles from the Paradise plant. “He has enough common sense to realize how it was going to affect the community.”

The TVA environmental assessment found it’s too expensive to maintain the 56-year-old plant, mostly because it was designed to constantly generate electricity. The plant generates too much power in the early morning hours, electricity that is wasted because no one is using it.

“Electricity is a use-it-or-lose-it proposition. There is not an easy way to store it,” TVA spokesman Jim Hopson said. “That translates into higher rates for the nearly 10 million people the TVA serves in parts of seven states.”

The decision comes as the TVA has been phasing out some of its older coal-fired power plants in favor of natural gas, which is cheaper and produces about half of the carbon dioxide of coal. In 2016, coal-fired power plants accounted for 29 percent of the TVA’s power supply. Last year, it was 19 percent. But the president appoints the TVA’s nine-member board, each for a five-year term. Trump has now appointed four board members. But there are two vacancies, giving Trump appointees a 4-3 majority.

The Paradise plant employs 131 people, whose salaries make them among the region’s top earners. The plant also buys about 1.1 million tons (1 million metric tons) of coal each year from two underground coal mines about 40 miles (64 kilometers) away — coal that has a value of $55.7 million and accounts for the jobs of 135 people in the coal industry, according to a PVA report. Local officials have worked hard to convince the TVA board to keep the plant open, including a letter-writing campaign from elementary school students, according to Muhlenberg County Judge Executive Curtis McGehee, the county’s top elected official.

“We just feel like it could be like an economic hurricane to our community” if the plant closes, McGehee said.

The Kentucky state House and Senate both passed resolutions Monday urging the TVA board to delay its Thursday vote. U.S. Senate Majority Leader Mitch McConnell and Sen. Rand Paul have gotten involved, and Republican Gov. Matt Bevin devoted a portion of his annual State of the Commonwealth address to urging the TEVA to postpone the decision.

“It’s wonderful to imagine that on a sunny day the sun is going to power our electricity and the wind is going to blow and it’s going to power, but it’s not real. It is not realistic,” Bevin said in a video posted to his Twitter account. “This is a battle worth fighting for. And for all the people who say, ‘Well, it’s a losing battle.’ That’s what cowards say. Cowards are afraid to do the right thing. And the people of Kentucky aren’t cowards.”

It could become a campaign issue this year as Bevin runs for re-election. Adam Edelen, one of the Democrats seeking to replace him, has partnered with coal executives to turn an abandoned coal mine in eastern Kentucky into a solar farm.