Deported immigrants get their last flight on ‘ICE Air’ 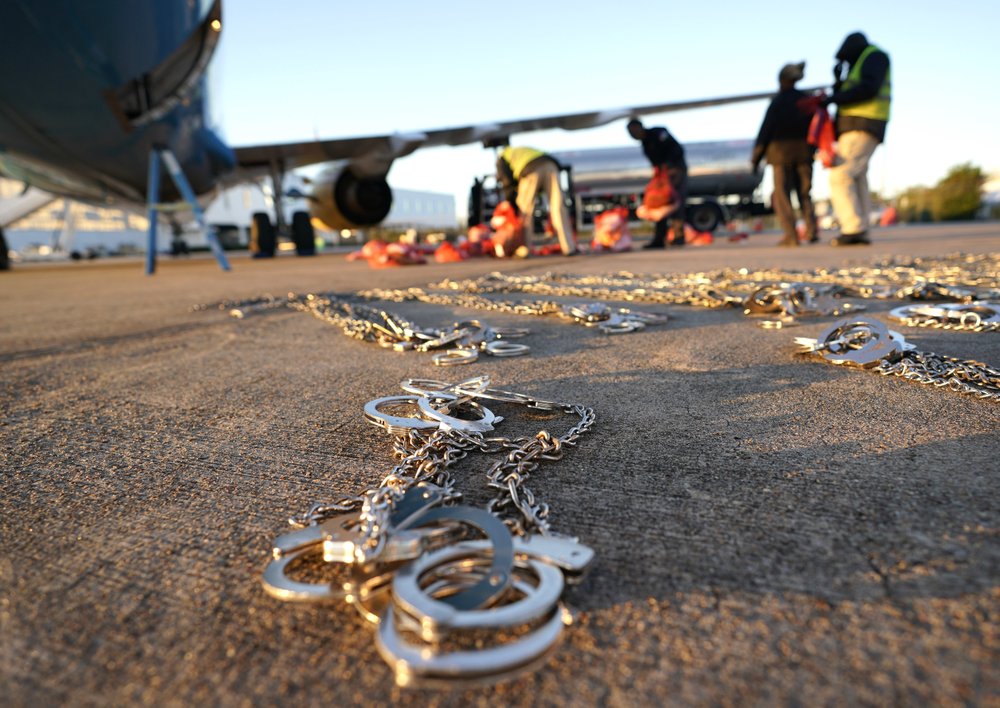 HOUSTON (AP) — Shackled at their ankles and wrists and their shoelaces removed, a long line of men and women waited on the tarmac as a team of officers patted them down and checked inside their mouths for anything hidden.

Then one by one, they climbed a mobile staircase and onto a charter plane the size of a commercial aircraft.

This was a deportation flight run by ICE Air. The chains would be removed and the shoelaces returned when the plane landed in El Salvador.

An obscure division of U.S. Immigration and Customs Enforcement operates hundreds of flights each year to remove immigrants. Deportation flights are big business: The U.S. government has spent approximately $1 billion on them in the last decade, and the Trump administration is seeking to raise ICE’s budget for charter flights by 30 percent.

ICE Air Operations transports detained immigrants between American cities and, for those with final removal orders, back to their home countries. About 100,000 people a year are deported on such flights.

While Mexican immigrants are generally flown to southern U.S. cities and then driven to the border so they can cross over, Central Americans have to be transported by air. And the large numbers of Mexicans who used to cross the border have largely been replaced by migrants from three impoverished Central American countries: El Salvador, Guatemala and Honduras.

According to flight-tracking data, deportation flights to Guatemala and Honduras have sharply increased this year. And ICE’s budget request for charter flights increased 30 percent last year compared to the year before.

The agency estimated last year that it spends about $7,785 per hour on the flights.

ICE shifted to chartering private planes about a decade ago after previously using a government service with the U.S. Marshals. The agency says moving to private flights saves about $25 million a year and gave it more flexibility. Charter flights also avoid putting large numbers of deported immigrants on commercial planes, which requires buying tickets for deportation officers accompanying them, or holding them in the U.S. for longer than necessary and tying up space in detention centers.

“I don’t want to elongate anybody’s detention with us,” said Pat Contreras, director of enforcement and removal for ICE’s Houston field office. “If a judge says you need to be removed, we should be expeditiously working to execute that order so that person does not spend any longer in detention than necessary.”

But migrant advocacy groups say ICE Air is an example of how tougher immigration enforcement — from detention to tracking to removal — enriches private companies.

“The way you would save money on ICE Air is by deporting fewer people, not by privatizing the industry,” said Bob Libal, director of Grassroots Leadership, which opposes immigration detention.

“ICE is a largely privatized agency,” Libal said. “In many ways, it’s been captured by the industries that profit from deportation and detention.”

The Associated Press observed a deportation flight being loaded last month at a private terminal of Bush Intercontinental Airport in Houston.

The Boeing 737 had no markings suggesting it was a deportation flight. Instead, it had the insignia of Swift Air, a private company that also flies charters for political campaigns and professional sports teams, including the NHL’s Boston Bruins and Chicago Blackhawks. In this case, Swift Air had been hired by Classic Air Charters, a Huntington, New York-based company that won ICE’s deportation flights contract last year.

Classic Air has been paid $51 million this year by ICE, according to federal spending records. The previous contractor, CSI Aviation of New Mexico, was paid $906 million by ICE’s removals division since 2010, when ICE privatized its flights.

When the plane landed in Houston, about 30 Salvadoran immigrants were already on board, flown in from Alexandria, Louisiana, an ICE Air hub. They peered out the windows as the plane sat on the tarmac.

Two buses arrived, carrying 45 men and five women. Their few belongings were in red mesh bags that workers sorted on the tarmac.

Officers checked each detainee before letting them board, a process that took about 20 minutes.

According to the agency, 29 of the 50 people who boarded the plane in Houston had been arrested on criminal charges, including four who were wanted in El Salvador for attempted murder or homicide, the agency said.

The remaining 21 were considered non-criminal, meaning they were being deported for immigration violations. Twenty of the 50 had been deported before.

ICE would not let AP reporters view the inside of the plane, but officials said the flights are orderly and quiet. A meal is served, and a doctor is on board. But all detainees — even those considered non-criminal — remain shackled until the plane lands.

“We try and be as humane as we can with everything that we do,” Contreras said. “We try to make them safe. We want to make sure that not one individual does anything wrong.”