City of La Crosse has new alternate-side parking rules that have not gone into effect yet, despite Tuesday snow 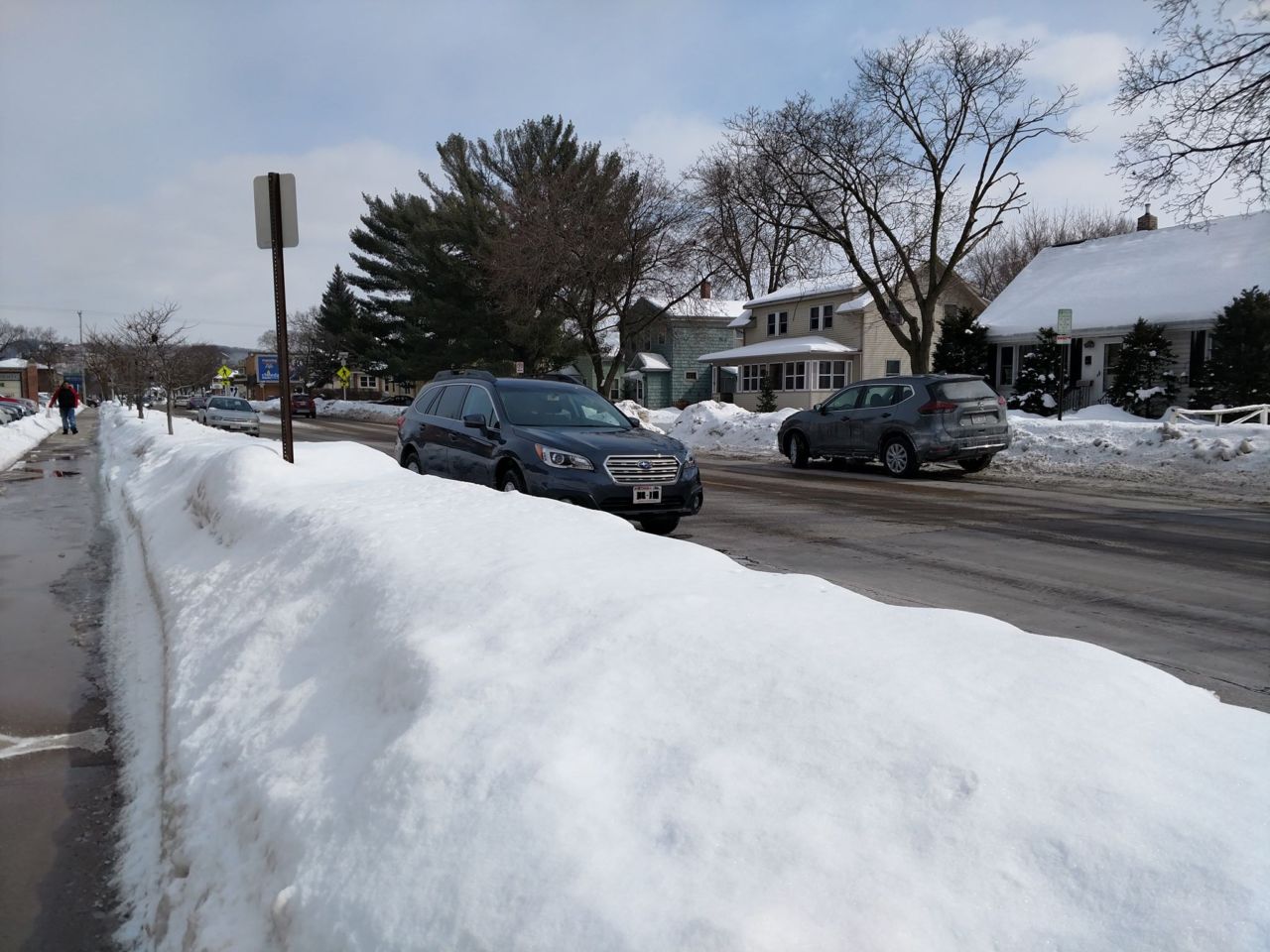 FILE - Snow is piled halfway as high as an SUV parked on Jackson Street in La Crosse on March 4, 2019.

One of the ways that could happen is if the city’s Superintendent of Streets basically says so, because conditions are essentially slick from snow, sleet, rain and/or ice.

Not abiding by alternate-side parking rules consists of a $0 fine the first time, then a $15 fine after that. That amount jumps to $30 if it’s not paid within 10 days and goes up to $60 if it’s not paid after 45 days.

The alternate-side parking rule is, essentially, parking on the odd numbered side of the street on odd days and even side on even days.

Another way a snow emergency would be called is if the National Weather Service La Crosse predicts three or more inches of snow.

“(It’s a) rainy type snow that’s going to be tough to pile up more than an inch or so over night,” Skow said. “Generally we’re expecting total snowfall for tonight into Wednesday around 1.5-2 inches for La Crosse and that’s probably a smidge on the generous side.”

Skow said there is a chance of some snow Thursday, Thursday night but, otherwise, nothing through Tuesday, except some bitter cold.

If and when that prediction hits 3 or more inches, the city would declare a snow emergency through multiple forms of communication, including media, putting alternate-side parking rules into effect.

That declaration would be terminated once the official determines streets to be safe again or after 48 hours.

Penalties would not go into effect until at least six hours after a snow emergency is declared.

Below is the city’s Municipal Code on snow emergency / alternate-side parking. It can also be found toward the bottom of this page.

Sec. 44-111. – Emergency or maintenance alternate side parking on streets

(a) Declaration of emergency or maintenance alternate side parking. Whenever in the opinion of the Superintendent of Streets, or that person’s designee, an emergency exists in the City because of snow, freezing rain, sleet, ice, snow drifts or other natural phenomena which would create or will likely create hazardous road conditions impeding or likely to impede the free movement of fire, health, police, emergency or other vehicular traffic or otherwise endanger the safety or welfare of the community or other maintenance is necessary to prevent or clear road obstructions, such official may declare emergency alternate side parking to exist. A prediction by the National Weather Service for the possible accumulation of three or more inches of snow on roadways for any part of the City of La Crosse is hereby declared as adequate reasoning for the declaration of a snow emergency. Notice of such emergency shall be given by press, electronic notification, radio or television, which news media shall be requested to cooperate with City officials and when given, such notice shall constitute due and proper notice. When in the opinion of such official that such emergency conditions no longer exist for the aforesaid emergency he/she is authorized to terminate the emergency period. Unless otherwise specified by such official, the period of alternative side parking will run for a consecutive forty-eight (48) hours after notice is issued. Notice of the emergency alternate side parking will be provided at least six hours prior to the penalties section herein taking effect.

(1) On odd-numbered days, vehicles shall only be parked, stopped or left standing on that side of the street having odd-numbered addresses.

(2) On even-numbered days, vehicles shall only be parked, stopped or left standing on that side of the street having even-numbered addresses.

(3) The provisions of this section shall not supersede more restrictive parking regulations such as no parking zones, etc. in effect in the City including without limitation.

(4) It shall be considered prima facia evidence that upon six hours after public notification of the start of alternate side parking, all sections of this ordinance are fully enforceable. Ignorance is not considered a valid defense for a violation.

(5) Exemptions. Vehicles are exempt from alternate side parking under snow emergencies declarations where parking is normally permitted only on one side of the street and in the downtown business district.

(c) Vehicles stopped – Removal. In the event any vehicle is stopped, parked, abandoned or left unattended in violation of this section, the Superintendent of Streets, or the Chief of Police, including also all the employees of the streets department, and the Police Department of the City, are authorized to remove or cause to be removed any such vehicle and to have such vehicle towed away.

Failure to follow the Alternate Side Parking rules results in the following citations: