Antetokounmpo scores 34, as Bucks comeback from 11 in 4th to top Spurs 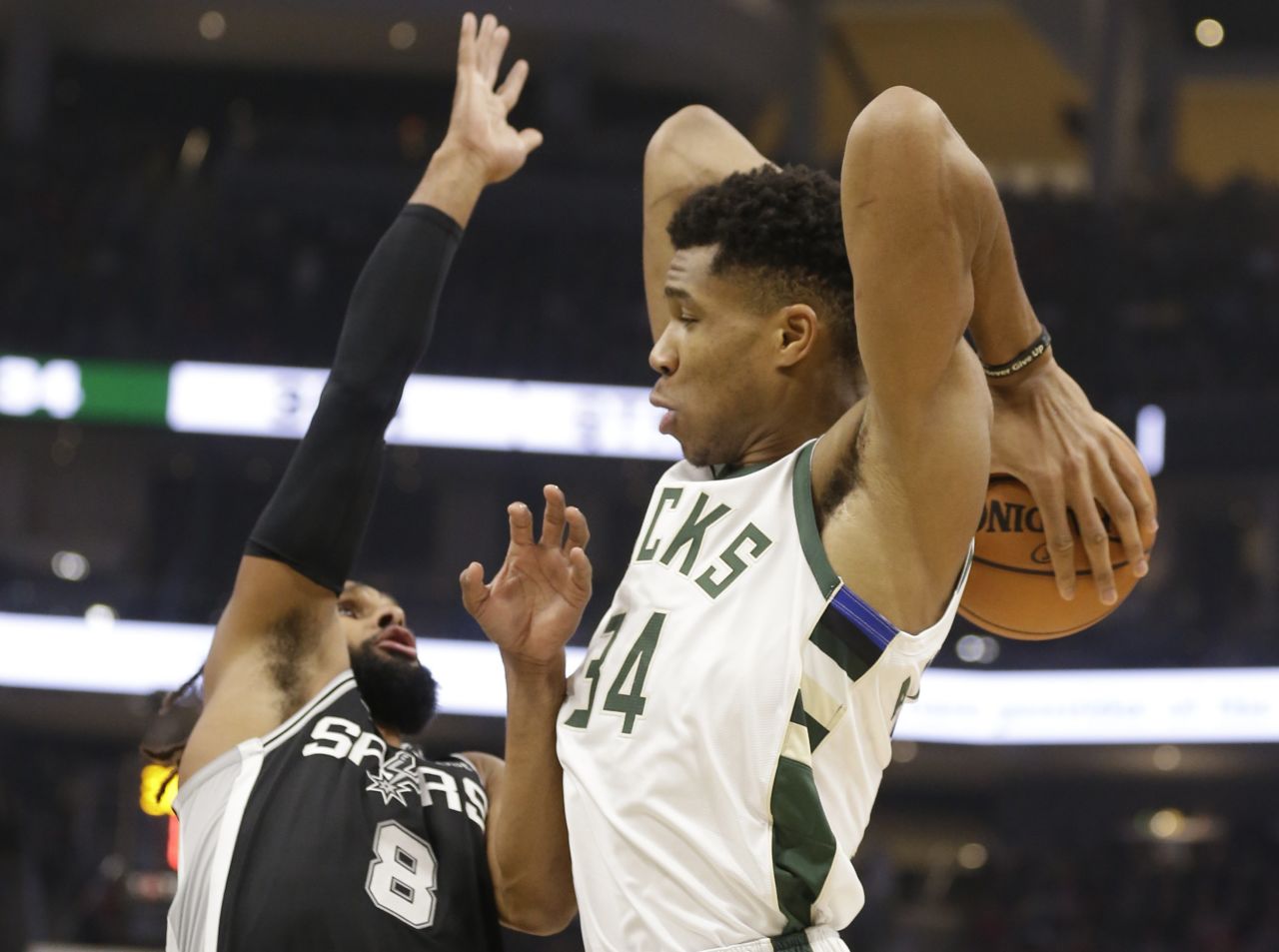 MILWAUKEE (AP) — Facing a potential second loss at home in two nights, Giannis Antetokounmpo unleashed a furious rally. When he’d finished, his teammates did the rest.

Antetokounmpo had 34 points and 18 rebounds, and the Bucks overcame an 11-point deficit in the fourth quarter to beat the San Antonio Spurs 135-129 on Saturday night.

“I was feeling relaxed,” said Antetokounmpo, who scored 14 points in the final period and heard chants of “MVP! MVP!” each time he stepped to the free-throw line. “I had a little bit of energy saved up for the fourth quarter.”

DeMar DeRozan scored 34 points for the Spurs, who took a 106-95 lead with 11 minutes to play after a jumper by Rudy Gay.

But the Bucks, who dropped a game to Phoenix on Friday, roared back in this one, which featured 26 lead changes. They took it for the final time when Antetokounmpo hit a pair of free throws with 2:44 left that made it 123-122.

“Giannis did a hell of a job keeping us in that game, and we kind of helped him out at the end,” Bucks guard Eric Bledsoe said.

Khris Middleton hit a key 3-pointer, Bledsoe drove to the hoop for a contested layup and Malcolm Brogdon knocked down a 3 off a drive and dish from Bledsoe with 8.9 seconds to play to put the game out of reach.

“If I’m going to have the ball at the end of the game in situations like that, I’ve got to be able to know when to score and when to pass,” said Bledsoe, who had 20 points and 10 assists. “Malcolm did a great job being in the right spot, and knocked it down.”

DeRozan has averaged 26.4 points in his last 15 games, including playoffs, against Milwaukee. But no one on the Spurs had an answer for Antetokounmpo.

“He is definitely a tough task,” DeRozan said. “He is so long, once he gets anywhere around the rim, it is kind of tough.”

Davis Bertans came off the bench with 17 points for the Spurs, who also got 18 from Bryn Forbes and 15 from LaMarcus Aldridge.

“We were in the game the whole time, we just couldn’t get a stop down the stretch,” Aldridge said.

It took San Antonio less than five minutes to wipe out Milwaukee’s early 15-point lead the Bucks built by starting 12 of 13 from the field. The Spurs went on to lose for the sixth time in the last eight games despite an 11-point lead late.

“It is tough to have control of the game and not win,” Aldridge said.

Spurs: Coach Gregg Popovich called departed star Kawhi Leonard a great player, but not a leader when discussing Patty Mills’ leadership role. “Kawhi’s talent will always be missed, but that leadership wasn’t his deal at the time. That may come as he progresses,” Popovich said before the game. Leonard was traded with Danny Green to the Raptors for DeRozan, Jakob Poeltl and a 2019 first-round pick in the offseason.

Bucks: Brogdon finished with 23 points, Middleton 21 and Sterling Brown 11. . F Ersan Ilyasova (right knee soreness) dressed but did not play. . Antetokounmpo was fouled in the act of shooting 55 feet from the basket at the end of the first quarter by Derrick White. Antetokounmpo made all three shots and White didn’t see the court the rest of the way. . Brook Lopez, who went 0 for 12 from 3-point range on Friday night, hit his first attempt against San Antonio.

Spurs: At Chicago on Monday for the third of a four-game trip.

Bucks: At Charlotte on Monday.