Alice, the Great Horned Owl, is throwing a retirement party after 20 years educating 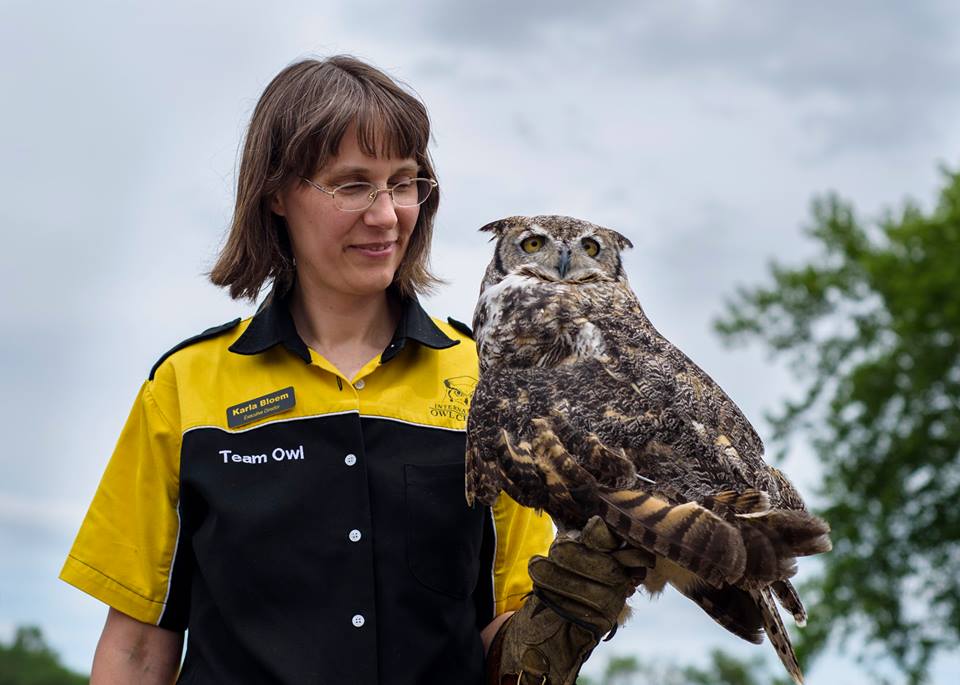 HOUSTON, Minn. — She was just 3.5 weeks old when she fell out of her nest and broke her wing.

Alice, the Great Horned Owl, has never been able to fly. She, however, has lived quite the life.

For the past 20 years, Alice has been the pioneer in educating the public on owl conservation from the International Owl Center in Houston, Minn., with her handler Karla Bloem.

The two of them started the owl center together — first out of a hot dog stand at the county fairgrounds before moving into the current center center. Now, however, Alice is retiring and will live the life of luxury — for an owl.

“She still gets her daily ration of rats, but she’s not working for them anymore,” Bloem said Thursday afternoon on WIZM (listen here). “She just gets some freebies.”

Saturday, everyone is invited to Alice’s retirement party at the center on Cedar Street (map). It will go from 10 a.m.—4 p.m.with owl-themed snacks — probably not rats — prizes and a special program on Alice’s life.

There could be four other owls there — Uhu the Eurasian eagle owl; Ruby the great horned owl; Piper the American barn owl; JR the eastern screech owl — and you’ll be able to hoot with Alice on live feed.

Alice isn’t sick or unhealthy. She’s just 21 years old and a little arthritic. Having that broken wing prevented her from ever flying. So, she’s got bad knees from using them more than any owl should — 20 years teaching educational programs might do that to anyone.

“It’s harder on her to be handled,” Bloem said. “When I pick her up and carry her around for programs, she just really doesn’t like it. So, I finally asked for, and got permission for her to retire.”

A young Alice in 1997 being socialized to be an ambassador owl. (Photo: Marge Cahak Gibson)

Owls — birds of prey — in captivity are required by law to be used for educational purposes. If not, they cannot live in captivity without that permission Bloem spoke of.

Alice, a bit mad, because Bloem is in her space.

In caring for Alice, at first, for health reasons, Bloem had to keep the 1.5-year-old owl indoors, which is unusual but that was the circumstance. Bloem, however, was already a falconer, and had an indoor aviary. So, with a few adjustments, Alice was officially a roommate.

In being with Bloem from basically the start, she said Alice, “thinks she’s one of us.” So, the owl loved the idea of being inside with her human and never left.

“Within a month she was fine (healthy) but she thought it was great because she could talk to me whenever she felt like it,” Bloem said of being in her indoor aviary.

There was, however, a communication gap, being Bloem didn’t speak owl and all.

“Because of Alice, I wound up doing a vocal study on great horned owls,” Bloem said. “She would do all her vocalizations to me and expected me to respond as a male great horned owl.

“Well, obviously I wasn’t doing it right because I didn’t know what I was supposed to do, which made her mad.”

So, Bloem decided to research it a bit and figure out how to speak owl. Only one problem with that.

Alice coming into her room from her personal screen porch outside. She can go in or out as she pleases.

“Nobody had ever studied great horned owl vocalization,” she said.

So, Bloem got to work in 2004 learning the language of the great horned owl — or at least the basics.

And, with that, Alice “certainly expects things,” Bloem said. “Whenever I come home from work or I’ve been away, she starts hooting. I’m expected to come up to her room and hoot back to her for a little bit.”

Day and night, “we have conversations,” Bloem said, but didn’t note what exactly they talk about.

In retirement, those conversations will simply continue. Alice will keep her aviary indoors, which leads to her own personal screened porch outside. There may be a rocking chair on that porch, but Bloem didn’t say.

“She’ll just continue to hang out, hoot at the wild owls and anyone who comes over to our place,” Bloem said.