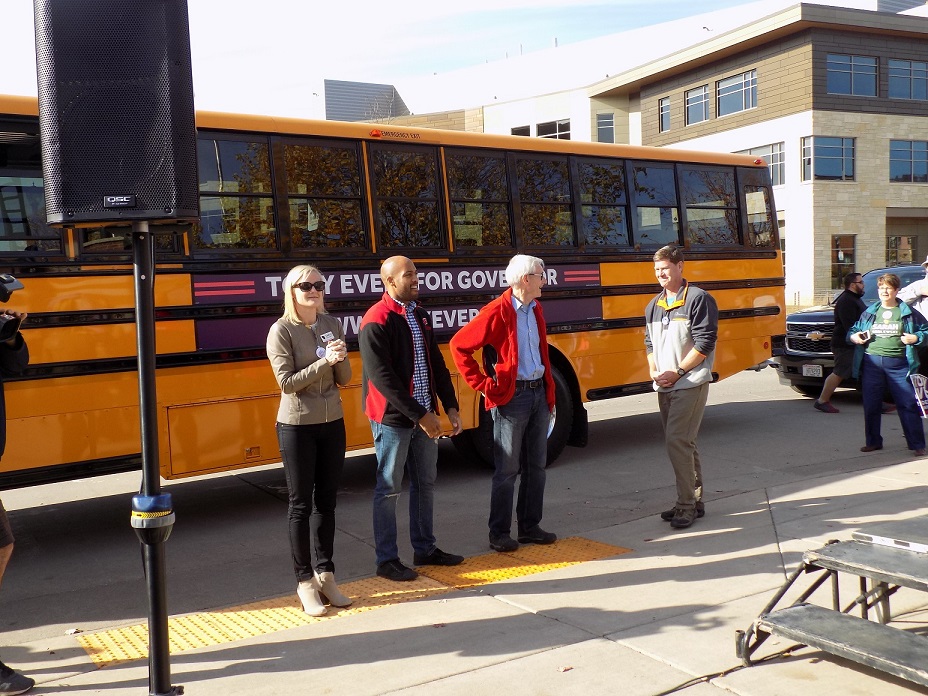 Governor candidate Tony Evers and lieutenant governor nominee Mandela Barnes headlined the rally at Veterans Memorial Field, half making fun of the ride they showed up in.

While, Gov. Scott Walker is campaigning around the state aboard a big blue bus, Evers and Barnes have their own ride — a yellow school bus.

Evers and others high on the party ticket brought the bus Wednesday to the University of Wisconsin-La Crosse.

Barnes joked about their ride with the campus audience.

“Tony has dedicated his entire life to our state’s children, in the classroom, as a principal, as our current superintendent of public education,” Barnes said. “And, that’s why we’re committed to restoring full funding back to our public schools in the state of Wisconsin.”

Evers told the crowd that budget cuts made by Walker have hurt the UW System.

“We’re going to return that money to the University of Wisconsin System.”

Barnes also told the crowd they want to bring a few things ‘back’ to the state.

“But we cannot do this without your help.”

Evers also brought up Wisconsin’s situation with health care and how state residents are apparently moving across the Mississippi River to Minnesota for cheaper coverage.

“Think about that for a minute,” Evers said. “You gotta move, in order to get it? That’s crap. We are going to take that Medicaid money.”

Also at the rally were state treasurer candidate Sarah Godlewski, Jennifer Shilling, Ron Kind, Steve Doyle and Jill Billings, who asked voters to support her party all the way down the ticket.

“Democrats are notorious for dropping your vote,” she said. “Don’t drop your vote after you hit Tammy and Tony and Madnella.

“We need you to keep voting all the way down the ballot.”

The candidates also met with young voters inside the UW-L student union.