Stealth jets, other aircraft fly in US, South Korean drills 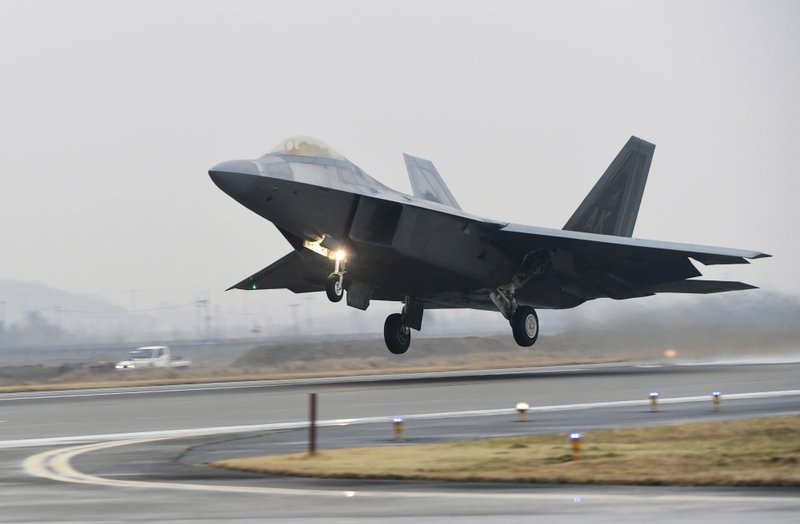 SEOUL, South Korea — Hundreds of aircrafts including two dozen stealth jets began training Monday as the United States and South Korea launched their biggest-ever combined air force exercise. The war games come a week after North Korea test-fired its most powerful missile ever, an ICBM that may be able to target the eastern seaboard of the United States.

Some local media report that B-1B bombers will also join aerial drills, but officials could not confirm the reports.

North Korea’s state media said the joint drill pushes the Korean Peninsula “to the brink of nuclear war.” Such language is typical in North Korean propaganda because the country sees U.S.-South Korean drills, which are held regularly, as preparation for invasion.

Still, always bad tensions are at a particularly dangerous point as North Korea edges toward its goal of a viable arsenal of nuclear-tipped long-range missiles, and President Donald Trump uses aggressive rhetoric toward the North, threatening, for instance, “fire and fury” toward the country.

Pyongyang will “seriously consider” countermeasures against the drill, and the U.S. and South Korea will “pay dearly for their provocations,” the Korean Central News Agency said on Sunday before the start of the exercises.

On Sunday, Lindsey Graham, a U.S. senator from the state of South Carolina, said he believes that it’s time for U.S. military families in South Korea to leave the country because conflict with North Korea is getting close. The U.S. government has not announced a formal decision to evacuate U.S. citizens from South Korea, and there were no such signs in the diplomatic community in Seoul. An evacuation of dependents by Seoul’s closest ally and major military defender could prompt a panicked reaction by other countries, and among South Koreans.

In addition to American diplomats and other embassy workers, about 28,500 U.S. troops operate in South Korea, and many come to their posts with their families, who often live on huge, well-guarded military bases.

Also on Sunday, the White House national security adviser said that Trump will take care of North Korean threats by “doing more ourselves.”

“The priorities that the president’s given us to move as quickly as we can to resolve this crisis with North Korea,” General H.R. McMaster told Fox News in an interview.