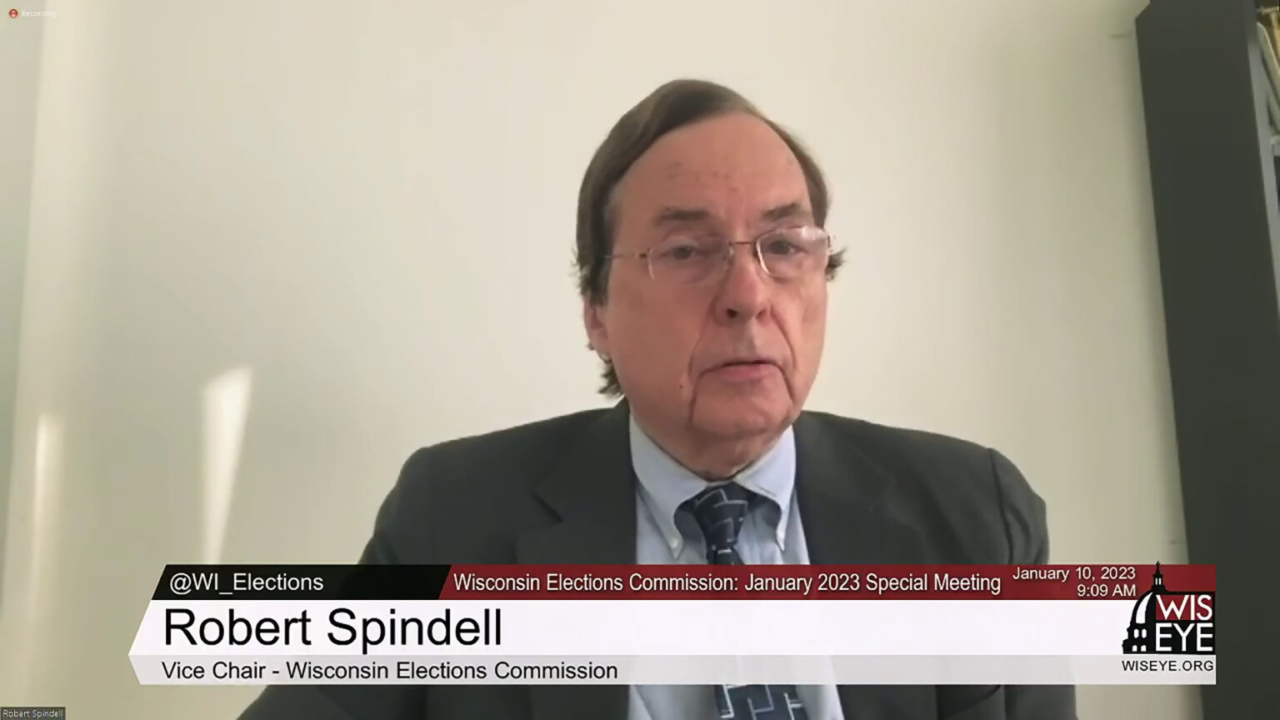 In this image made from video of WisconsinEye feed, Commissioner Robert Spindell Jr. speaks during a virtual Wisconsin Elections Commission meeting on Tuesday, Jan. 10, 2023. Black and Hispanic voters reacted Thursday, Jan. 12, 2023 to news that Spindell, a Republican member of the state elections commission, was bragging about low turnout among minorities in Milwaukee, a key factor in U.S. Sen. Ron Johnson's narrow win over a candidate seeking to become the first Black senator from the state. (WisconsinEye via AP)

Robert Spindell, the election commissioner who also served as a fake Republican elector for former President Donald Trump, did not back down. He rejected calls from liberals and a fellow Democratic commissioner to resign, and said he does not support suppressing turnout.

Spindell said he was merely touting efforts by the GOP to counter liberal messaging in the Democratic stronghold of Milwaukee. High turnout there is key to Democrats winning statewide.

Spindell, a former Milwaukee election official, said in an email newsletter that Republicans “can be especially proud” of lowered turnout in Milwaukee during the 2022 election, “with the major reduction happening in the overwhelming Black and Hispanic areas.”

It’s not clear what effect Republican efforts in Milwaukee had on the behaviors of Black and Hispanic voters, even as Spindell’s email detailed a number of those strategies targeting those communities. Among them: “Negative Black Radio Commercials.”

Two of the ads paid for by the Republican Party of Wisconsin, and obtained by The Associated Press, hit Wisconsin Gov. Tony Evers and Lt. Gov. Mandela Barnes, who ran for U.S. Senate.

In one ad, a stern-sounding narrator alleges that Evers and Barnes “failed miserably” in protecting families from “violence, mayhem and death.” In another spot, the same narrator says Evers did not help students of color do better in school or support allowing public school students to use a taxpayer-funded voucher to attend private schools.

Wisconsin has long faced the nation’s largest achievement gap between white and Black students, the vast majority of whom live in Milwaukee.

Evers won reelection but Barnes narrowly lost to Republican U.S. Sen. Ron Johnson. Spindell said in his email that turnout in Milwaukee was down by 37,000 voters compared to 2018. Barnes lost his Senate race by just under 27,000 votes.

Barnes, who is Black and from Milwaukee, declined to comment on Spindell’s remarks.

Wisconsin does not record the race or ethnicity of voters, and John Johnson, a researcher at Marquette University Law School, cautioned against drawing conclusions about racial voting patterns from such limited information. Johnson’s own analysis of election results also indicated a decline in voter turnout in majority-Black and majority-Hispanic wards in 2022, but the most recently available demographic data comes from the 2020 census, which the city of Milwaukee has contested amid claims that it gives outdated information on the voting-age population.

Regardless of the actual turnout levels, Neumann-Ortiz said she has seen a lack of enthusiasm among Hispanic voters, who say they don’t feel represented. She attributed the problem to Wisconsin’s state legislative maps, which give Republican lawmakers a strong majority in both chambers in a state where voters elected Democrats as governor, attorney general and secretary of state.

“Disenchantment has produced lower levels of participation,” Neumann-Ortiz said. “If they genuinely wanted to make inroads, they would stop trying to undermine the ability of Latinos to vote.”

Organizers in Milwaukee’s Black community echoed that sentiment on the campaign trail in 2022, describing young Black voters as disaffected and tough to mobilize while working to elect Barnes as the state’s first Black U.S. senator.

Polling also shows there was a national increase in Black support for Republicans in the midterm.

Still, advocates in Milwaukee say years of Republican-led efforts to make it more difficult to vote were really thinly veiled attempts to silence voters in Democrat-heavy Milwaukee, where Black and Hispanic residents account for about 60% of the population.

Under former Republican Gov. Scott Walker, Republicans in Wisconsin flexed their muscle to implement a voter ID proposal and limit the days and hours of early voting. The conservative-controlled Wisconsin Supreme Court last year enacted other GOP priorities when it outlawed ballot drop boxes and said voters cannot have someone else return a ballot on their behalf. Courts also have limited clerks’ abilities to fill in missing ballot information, such as incomplete addresses.

Neumann-Ortiz called the efforts “death by 1,000 cuts to create barriers.”

“Election after election, we are left as a Black organization to have to explain why Black turnout decreases in some areas,” Kyle Johnson, political director of the Milwaukee-based Black Leaders Organizing for Communities, said in a statement. “Many of us have been sounding the alarm about how sinister voter suppression tactics have become, and Spindell’s comments reinforce what we already knew.”