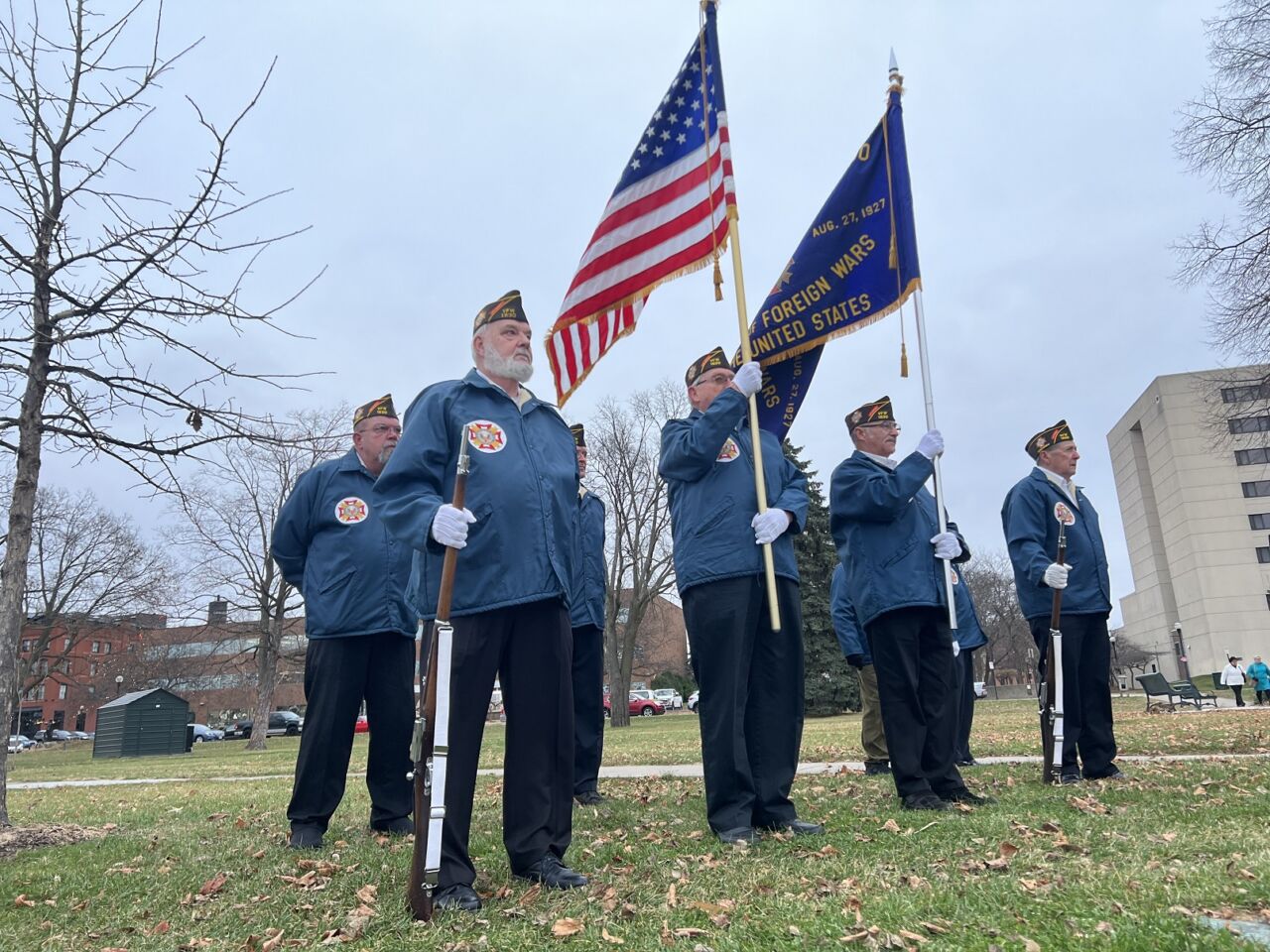 The VFW Post 1530 honor guard before the groundbreaking of a new military memorial at Riverside Park on Friday, Nov. 11, 2022. (PHOTO: Rick Solem)

A groundbreaking Friday at La Crosse’s Riverside Park for a veterans memorial statue that’s been eight years in the making.

On Veterans Day, the VFW Post 1530 dedicated a groundbreaking for a statue made by a local artist that will be going up in the spring of 2023.

Carol Gross, vice president with the La Crosse City Vision Foundation (CVF) said they’ve been trying to do something in the city to honor veterans through two city of La Crosse Parks, Recreation and Forestry directors and a new Park Board. But, after eight years, on a chilly afternoon, the shovels hit the dirt to commemorate the groundbreaking.

“I think it’s awesome what we can do for people now,” Gross said. “And I know it’s a statue, it’s a bronze statue. It’s not something that’s going to give back, right to a vet, but it’s going to be a place where people can come down, sit and think of their loved ones.

“I think that’s really, something I think is important.”

Gross was helping spearhead the cause in honor of her father-in-law, Neal Gross, a World War II veteran. Another CVF board member working hard to finalize the project is veteran Pat Houlihan, who served in the Army in 1970-71 in Vietnam and is now an advocate for the VFW and La Crosse American Legion Post 52.

The statue itself, sitting atop a granite pedestal will be a bronze American flag, as well as a bald eagle. It will be placed in honor of all six branches of the military: Army, Navy, Air Force, Marines, Space Force and Coast Guard.

Local artist Michael Martino created the statue. He said at the groundbreaking it’s ready to go, it’s just sitting in his workshop waiting for spring.

“It took some work, some cooperation with the city,” CVF president Jay Lokken said. “There’s also a lot of things that go into the studies, related to 200-year floods and all the types of things that come with it. So, that makes it more complex, and we had to pay for those studies too.”

The entire project is said to cost about $500,000 and donations are still being taken, where people can buy a personally engraved brick in honor of a veteran for either $500 or $1,000.

“Raised about $60,000 already but we have a ways to go yet,” Lokken said. “It’s about a half million with the statue and everything together, when we get done, will be about that amount.”

Gross added that the everything surrounding the statue cost around $200,000 and the price, with everything else added, was more likely to be around $300,000.