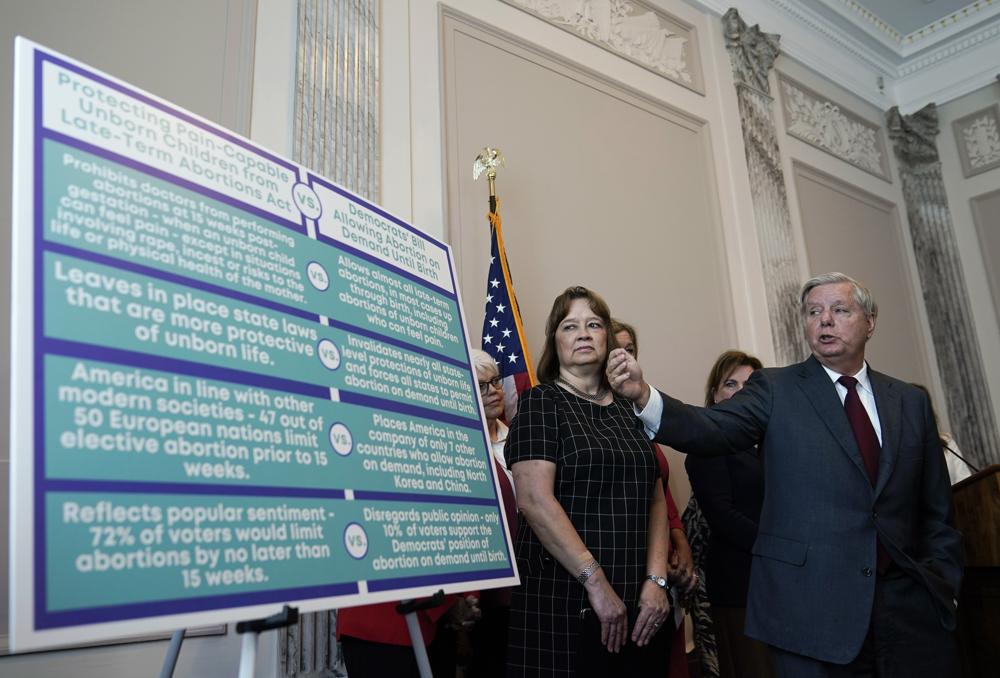 WASHINGTON (AP) — The White House and the American College of Obstetricians and Gynecologists said that a Republican-led proposal to ban abortion nationwide after 15 weeks would endanger the health of women and have severe consequences for physicians.

“If passed and enacted, this bill would create a nationwide health crisis, imperiling the health and lives of women in all 50 states,” according to a preliminary analysis of the bill by Jennifer Klein, the White House Gender Policy Council chairwoman, that was obtained by The Associated Press. “It would transform the practice of medicine, opening the door to doctors being thrown in jail if they fulfill their duty of care to patients according to their best medical judgment.”

President Joe Biden himself said at a fundraiser that some GOP efforts to ban abortion were more extreme than his own Catholic faith.

“I happen to be a practicing Roman Catholic. My church doesn’t even make that argument,” he said, referring to abortion bans that leave “no exceptions. Rape, incest. No exceptions.”

Catholic teaching is that abortion is prohibited, though life-saving surgery for the mother is permitted, even if it means the baby will die as a result. The measure introduced last week by Sen. Lindsey Graham, R-S.C., proposes a nationwide ban that would allow for rare exceptions.

The federal legislation has almost no chance of becoming law in the Democratic-controlled Congress. GOP leaders did not immediately embrace it and Democrats are pointing to the proposal as an alarming signal of where Republicans would try to go if they were to win control of the Congress in November.

Many in the United States had believed the constitutional right to abortion, established by the Supreme Court almost 50 years ago, could never be overturned. But that protection was stripped away this year by the court’s conservative majority, and advocates are leaving nothing to chance.

A majority of those questioned in a July poll by the AP-NORC Center for Public Affairs Research said Congress should pass a law guaranteeing access to legal abortion nationwide.

Vice President Kamala Harris urged Democratic attorneys general at a meeting Thursday in Milwaukee to keep fighting for abortion rights in the states. She singled out Wisconsin’s Josh Kaul, who is up for reelection in November, for filing a lawsuit to challenge the state’s 1849 law banning abortion, with no exceptions for rape or incest.

“Josh, our administration has your back,” she said to applause.

Clinics in Wisconsin stopped performing abortions after the Supreme Court ruling overturning Roe v. Wade as the legal fight plays out over whether the state law is in effect. Republican lawmakers have rejected two attempts by Democratic Gov. Tony Evers, also on the ballot, to repeal the law.

The American College of Obstetricians and Gynecologists, a nonprofit organization representing more than 60,000 physicians nationwide, sent a letter to the White House on Thursday outlining its concerns about the proposed law.

The group took issue with the “arbitrary gestational age limit” because it was “not grounded in science and medical evidence and would dramatically interfere with the ability of patients to receive timely medical care, including prenatal care, miscarriage management, and abortion care.”

The organization argued that doctors would become less skilled because if the bans were in effect, their training would be altered to comply with law. The letter said doctors feared the bans already in place in several states following the overturning of abortion rights will “have deadly consequences, further exacerbating the worsening maternal mortality crisis, within which 80% of deaths are preventable.”

The White House said the Republican proposal could have a chilling effect, with the prospect of doctors unwilling to care for patients any more. Doctors could also face criminal charges for performing an abortion to safeguard the health of the mother, offering miscarriage care, providing an abortion to a pregnant woman whose baby has no chance of survival, or treating a rape victim who has not fully completed reporting requirements.