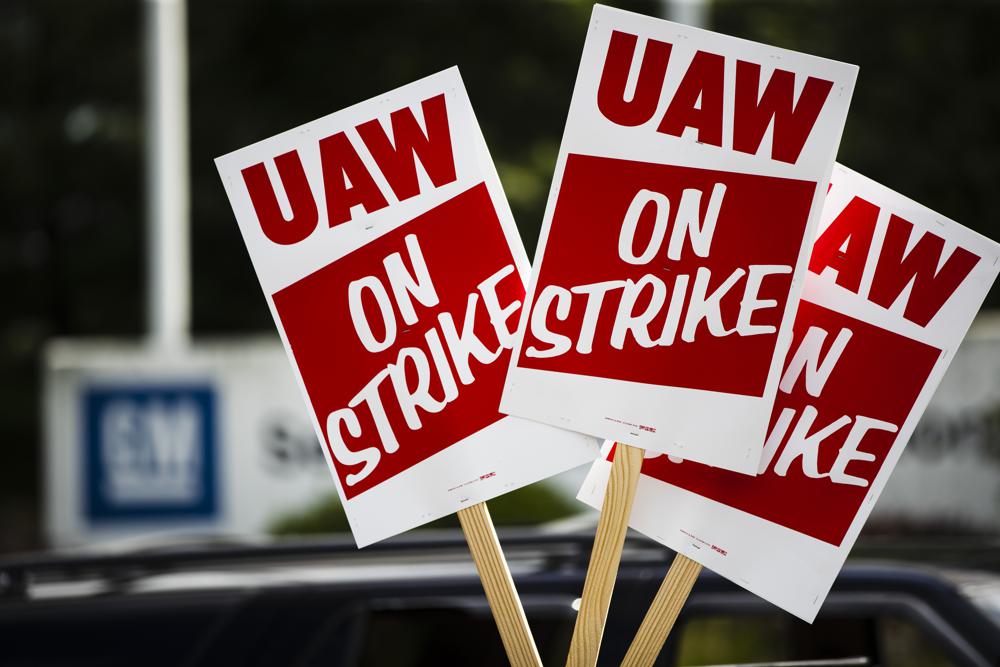 FILE - Signs are posted during a demonstration outside a General Motors facility in Langhorne, Pa., Sept. 16, 2019. The United Auto Workers union is increasing the strike pay it offers workers who walk off the job for the second time this year in 2022, following a spate of strikes amid the ongoing worker shortages nationwide. (AP Photo/Matt Rourke, File)

Members of the United Auto Workers union on Thursday rescinded an increase in strike pay that had been approved earlier in their annual convention.

After some delegates raised concerns about the potential cost of the $500 a week strike pay, it was dropped, the Detroit Free Press reported. But a previous increase in strike pay that union officials made earlier this year remains in place. So striking workers will still receive $400 a week, up from the previous $275.

Another change that will allow strike pay to begin on the first day of a walkout instead of the eighth was allowed to stand.

More than 1,000 CNH Industrial workers who have been on strike at plants in Burlington, Iowa, and Racine, Wisconsin, since early May will likely be affected by the changes.

That is just one of the latest in a string of strikes since the pandemic began. The largest one was a monthlong strike by 10,000 Deere & Co. workers in the UAW last year that led to a new contract that included 10% raises. Other unions have also gone on strike to demand better wages and benefits, including about 2,500 machinists union members who plan to go on strike next week at three Boeing plants in Missouri and Illinois and a two-month-long strike last year by 1,400 workers at Kellogg’s cereal plants in four states.

More than 100,000 railroad workers also came close to going on strike this month before President Joe Biden intervened by appointing a board of arbitrators to help settle the dispute.

Workers nationwide have been emboldened to ask for more because of the ongoing worker shortages and because workers didn’t always feel appreciated while working long hours during the pandemic.