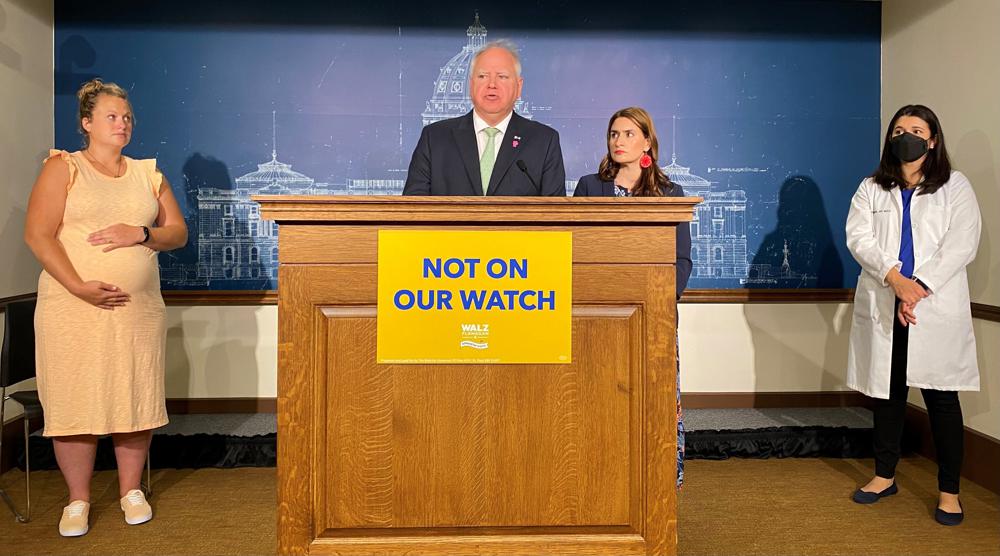 Democratic Gov. Tim Walz center, painted Republican challenger Scott Jensen as an extremist at a news conference at the State Capitol in St. Paul, Minn., on Tuesday, June 28, 2022, as he vowed to protect abortion rights in Minnesota. (Trisha Ahmed/Report for America via AP)

ST. PAUL, Minn. (AP) — Democratic Gov. Tim Walz painted Republican challenger Scott Jensen as an extremist Tuesday as he vowed to protect abortion rights in Minnesota, one of the few Midwestern states where abortion is expected to remain legal.

Friday’s U.S. Supreme Court decision overturning Roe v. Wade has changed the dynamics of the election campaign in Minnesota, Walz said at a news conference. He noted that Jensen has said he supports a ban on all abortions in Minnesota except to save the life of the mother, even in cases of rape or incest, and has pledged to appoint anti-abortion judges to the state Supreme Court.

“Reproductive rights are on the ballot in November. The stakes are clear, they could not be higher,” Walz said. “The governor’s office is now the last line of defense against an abortion ban in Minnesota.”

Abortion will remain legal in Minnesota, for now, under an 1995 state Supreme Court decision, but the state has some restrictions, including a 24-hour waiting period.

But Walz said those rights remain at risk, noting that his predecessor vetoed eight bills that would have increased Minnesota’s restrictions. And while five of the seven current Minnesota Supreme Court justices were appointed by Democratic governors, he pointed out that three will hit the mandatory retirement age of 70 in the next gubernatorial term.

Walz, the next day corrected that statement, as only one judge will hit the mandatory retirement age over the next governor’s term, not three. Walz campaign spokesman Darwin Forsyth said the governor misspoke, and meant to say only that he thinks three retirements are “probable” in the next term. G. Barry Anderson is the only justice who will hit the mandatory retirement age in the next four years. Forsyth said he didn’t know if the governor expected any other specific justices to retire.

Walz said he expects abortion rights will help Democrats fire up their base and appeal to suburban women swing voters who could be the key to not only the governor’s race, but control of the Legislature, which is now divided between Senate Republican and House Democratic majorities.

“This decision changes everything,” Walz said.

Other Democratic office-holders and candidates in Minnesota and elsewhere have also seized on the abortion issue, which erupted in what was expected to be a good campaign year for Republicans due to inflation, high gas prices, crime and President Joe Biden’s sagging popularity.

While many Minnesota Republicans were quick to welcome Friday’s U.S. Supreme Court ruling, Democratic U.S. Rep. Angie Craig accused her GOP challenger, Tyler Kistner, of ducking the issue. The race in their mostly suburban district south of the Twin Cities is considered a toss-up. As of Tuesday, he had not commented about it on social media or issued a press release about it.

“#CricketsKistner has still said nothing about the Supreme Court overturning Roe v Wade,” Craig tweeted Sunday. “I will always protect your privacy and freedoms — and you’ll never have to wonder where I stand when it comes to your fundamental rights.”

Kistner’s campaign did not immediately respond to requests for comment Tuesday. While he called himself “100% Pro-Life” on his website in 2020, there’s no mention of abortion there now.

Also appearing with the governor was a visibly pregnant Tippy Amundson, of Brooklyn Park, who told reporters about the difficulty she had in securing a late-term abortion in 2016 when learned at 20 weeks that her unborn son had stopped developing due to genetic abnormalities. Doctors warned her that she could lose her uterus because of complications with her placenta.

Because she was able get an abortion at the only clinic in Minnesota that provided them that late, she said, she now has two sons, ages 5 and 2, and is due to deliver a third son in September.

“Scott Jensen’s abortion ban would have left me without a uterus and without my children,” Amundson said.

Jensen, a family physician from Chaska, posted a video Tuesday in which he depicted Walz as the extremist. The Supreme Court’s decision doesn’t immediately change anything and merely gives Minnesota “a chance to have that big discussion” about the future of abortion, he said.

While Jensen accused Walz of wanting to allow abortion up until birth, the governor dismissed that as an “unbelievable” argument, saying no provider performs them that late.

Trisha Ahmed, a corps member for the Associated Press/Report for America Statehouse News Initiative, contributed to this story. Report for America is a nonprofit national service program that places journalists in local newsrooms to report on undercovered issues. Follow Trisha Ahmed on Twitter.